A Marvellous Minimalist Movie Before The Blockbuster Bombast Begins

As you well know we are on the verge of the Summer blockbuster season. We've got IRONMAN, INDIANA JONES, BATMAN, SPEED RACER, and many many more multi-million dollar platters to contend with so it seems apt to have a small scale appetizer of an independent human interest story to snack on beforehand: 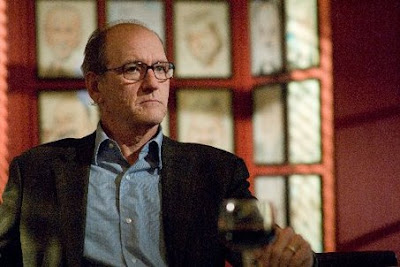 Richard Jenkins, best known as Nathan Fisher Sr. - the father on Six Feet Under, finally gets a leading role in this quietly compelling movie.

After tons of movie and TV roles in which he perfected a weathered hangdog demeanor, Jenkins wears his character in THE VISITOR like an old comfortable suit.

Being that his character is a familiar one - a widowed college professor toiling for years on an unfinished book, isolated from social life and going through the motions in severe need of a wake-up call.

Yes, it's a ‘wake up and realize you're alive’ movie like ABOUT SCHMIDT (or even HOW STELLA GOT HER GROOVE BACK) and a good one at that with its lack of flash and abundance of grace.

Jenkins returns to his little used in apartment in New York City to find 2 illegal immigrants (Haaz Sleiman and Danai Jekesai Gurira) living there. Realizing they had been rent-scammed they pack up to leave but Jenkins allows them to stay. He forms a friendship with Sleiman who teaches him to play the bongos.

Scenes showing a business-suited Jenkins and the paisley attired Sleiman drumming away in the park are particularly smile inducing. The good times are short lived as Sleiman is arrested and detained with deportation imminent. Jenkins does what he can to help his new friend and in the process courts Sleiman's mother (played wonderfully by Hiam Abbass).

Writer/Director Thomas McCarthy's first film THE STATION AGENT was a pleasing personable picture and THE VISITOR is a fine follow-up. So subtle that it may leave some movie-goers with a “with just happened?” feeling but I believe most will savor its subtle charms. Jenkins' measured performance lingers and the straight-forward framework is refreshing in these days of quick-cuts and contrived narrative gimmicks.

“Please step away from the glass” Jenkins is frustratingly told repeatedly by a immigration station desk jockey in a sober 3rd act scene, and it's a chilling moment; the sad reality of how people are tragically separated for purposeless political reasons inhales all the air of the room and leaves our protagonist on the verge of existential limbo.

Finding one's own rhythm - to maybe the beat of a different drummer as the expression goes, is the only way back into the human race. There among the beats, both inner and outer, can be found a sense of soul and way of life that Jenkins learns shouldn't just be visited.

Great review - I think you and I are the only people in the blogosphere that have seen this. I enjoyed it, and though I didn't get a "what just happened?" feeling, I did get a bit of a "why did this just happen?" feeling, as the film doesn't take much of a stance either way except to say "this isn't fair!"

Still, Jenkins was great (and it was great to see him in a leading role) and Sleiman was excellent, and hopefully will get bigger parts as a result. Indeed, a fine follow-up to The Station Agent, though I fear it's much too slow-moving for even many indie fans.

Your blog is very interesting and informative. Blockbuster, Inc. is an international company providing in-home entertainment. It is the largest video rental chain in the world. Blockbuster has been of great frustration to me. I never got the ordered items. However, my friends are rather satisfied with the company. I have posted my comments and reviews to www.pissedconsumer.com. Hope others will not be tricked in.

filmbabble.blogspot.com; You saved my day again.