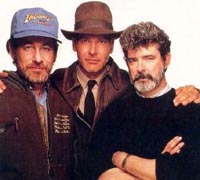 A few months back I joked on this blog about doing a post about self referential moments in the films of George Lucas and Steven Spielberg and now in anticipation of their  new movie INDIANA JONES AND THE KINGDOM OF THE CRYSTAL SKULL (only hours away!) I thought, hey, why not really do it?

It's fun to look at the touches that tied their films together as if all the characters and stories occurred in the same cinematic world.

So here I go with another patented Film Babble Blog list:

1. The number 1138, coming from the Lucas written and directed film THX 1138, appears in all of the STAR WARS and INDIANA JONES movies. Sometimes the ‘THX’ appears too like in my favorite reference (although a ‘1’ is missing) in AMERICAN GRAFFITI. John Milner’s (Paul Le Mat) yellow Deuce Coup’s license plate was a cool visual reference/plug.

According to Wikipedia the number appears in many non-Lucas films and TV shows too - from SNEAKERS to The West Wing. Also funnily enough on the STAR WARS: EPISODE III - REVENGE OF THE SITH DVD if you go to the Options menu and highlight the THX, then press 11-3-8 “allows you to watch Yoda breakdance”. Well, how’s that for an Easter Egg? 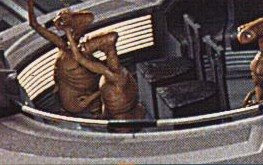 2. E.T.'s in THE PHANTOM MENACE: Yep, a brief shot that wowed hardcore fanboys all over the whole wide web. In the first STAR WARS prequel you can see 3 E.T.’s in the galactic senate scene. The idea that E.T. is from the same universe that the STAR WARS series takes place in is an especially cute connection. And man it gets even cuter from here on out: 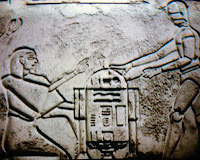 3. An Image of C-3PO And R2-D2: In RAIDERS OF THE LOST ARK: This is the one I joked about a few months back but I think it justifies this list. As I wrote before, on the wall in the background of the Egyptian temple that Indiana Jones finds the Ark in you can see C-3PO and R2D2 illustrated in Hieroglyphic form.

It’s funny to see the iconic robots in Ancient Egypt. Hmm, is that telling us how long a “long time ago” really was? And that a galaxy far far away wasn't too far for a visit for the intrepid droids. They always have speculated how aliens helped build the pyramids, you know? Okay, I digress...

4. Club Obi Wan in INDIANA JONES AND THE TEMPLE OF DOOM: This is a blink and miss it, like much of the humour in this oft dissed dark sequel, bit that has another shout out from one galaxy to another. The opening scene takes place in a ritzy Shanghai nightclub with an elaborate soundstage-sized floor that can accomodate what looks like 100 dancing girls in shots that look removed from their supposed audience. Of course the Force is with them so why nit-pick?

5. Yoda in E.T.: Hey wait, if E.T.s exist in the STAR WARS universe, how come Yoda is a Halloween costume in E.T.? Also, Elliot (Henry Thomas) has a bedroom full of clearly visible STAR WARS toys, and on somewhat of a related note, this deleted scene features Harrison Ford, who you only see in over the shoulder shots and hear the voice of, as the Principal at Elliot’s elementary school.

6. An opening scene satire of JAWS in 1941: This may be the most blatant example of a director satirizing his own material. In what is known as his biggest flop, Spielberg recreates the opening of JAWS exactly down to having the same skinny-dipping young woman (Susan Blacklinie). This time however, Blacklinie is violated by the periscope of a surfacing Japanese submarine instead eaten by a shark. At least this time she escapes with her life, if not her dignity, intact. 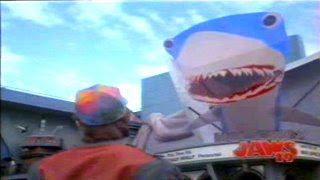 7. JAWS 19 in BACK TO THE FUTURE PART II: I hate including this one but I just can’t help it. Especially because it’s only executive produced by Spielberg and all but the mocking of the ill-fated JAWS series as it gets more and more gimmicky in the near future still makes the cut on my blog. Just got a thing for the trials and tribulations of Marty McFly I guess. 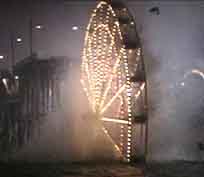 8. The collapsing ferris wheel from 1941 in A.I.: This was mocked by a number of critics and in light of all the Spielbergian self-referential segments over the years I can see why.

Still, I feel it was somewhat un-intentional - I mean would Spielberg really want us to be reminded of one of his film flukes when trying to re-imagine what was originally a Stanley Kubrick project? I think not.

10. The Bicycle In WAR OF THE WORLDS evokes E.T.: Lucius Shephard of ElectricStory.com wrote “Spielberg indulges in an in-joke with a bicycle a la E.T. Wikipedia also chimes in with “there are several references to other movies, mostly movies directed or produced by Steven Spielberg.

For example, the bicycle falling from a hook is similar to a scene in E.T. The movie CLOSE ENCOUNTERS OF THE THIRD KIND also uses a low reverberating note, although both movies may have gotten the idea originally from the novel.” Yes, this one is kinda flimsy as that Wikipedia quote implies but Hell! These lists have got to end somewhere.

This geeky as all get out list is in anticipation of INDIANA JONES AND THE LONG ASS TITLE NOBODY WILL USE (yes, I know I've made this lame-asss joke before).

Excellent list. I'd potentially add the "moon balloon" from AI - it evoked memories of ET for me when I first saw it.

What a bright idea! Your list made me want to watch all the films in question once again, just to witness these references with my own eyes.

I'd never noticed the droids before. Wow!