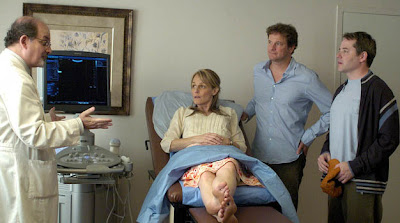 Best known as Paul Reiser’s wisecracking wife on the rom sit-com Mad About You, Helen Hunt has forged a cagey career on the big screen.

Despite her Best Actress win for AS GOOD AS IT GETS her other roles have been less than stellar - her sideline spouse part in CAST AWAY could’ve been done by just about any actress and her tone and delivery in Woody Allen’s THE CURSE OF THE JADE SCORPION were so off the mark that I would consider it among the worst acting of the last decade.

So, surprise surprise - I wasn’t looking forward to her first-time out as director but lo and behold, I actually ended up being won over.

Based on the 1990 novel by Elinor Lipman, it’s being marketed as a comic drama but I’d but the emphasis on drama and as such it's definitely a more genuine work than Noam Murro’s recent SMART PEOPLE - another piece about aging, pregnancy, and over educated middle-class white anquish. And it has a cameo by Mr. “Satanic Verses” himself Salman Rushdie as Hunt’s gynecologist!

Hunt casts herself as a withdrawn elementary school teacher and Matthew Broderick as her pensive husband. Shortly after their marriage he tells her he doesn't “want this life” and moves out after she isn't able to change his mind with some spontaneous kitchen floor sex.

Within 9 hours of the break-up, Colin Firth as a befuddled divorced parent is hitting on her in the parking lot of her school but her biological clock is ticking so loudly that it barely registers.

Then, if the timing couldn’t be any worse (or better for the sake of the drama) Bette Midler, as a local TV talk show host, shows up out of the blue saying she’s Hunt’s long lost Mother and drops another bombshell: Steve McQueen was her father.

Hunt is skeptical of this, and rightly so, but charmed by Midler’s schtick - which is undeniably the funnybone of this film. Wanting to pursue a relationship with Firth is confounded by Hunt finding out she is pregnant with Broderick’s baby.

Broderick, in a part that's more pathetic ELECTION-style than FERRIS BUELLER-ish, wants back into Hunt’s life...maybe.

Hunt, using long takes and a good sense of lighting, effectively portrays the stressful pulling of her character’s sensibilities in every direction and does it with a nice lack of snarky one-liners and manufactured quirk. T

HEN SHE FOUND ME shows that Hunt has learned a lot from the film makers and actors she's worked with (James L. Brooks, Robert Altman, Nancy Meyers, Jack Nicholson, et al) and, weirdly enough, makes her a film maker to look out for. Never thought I’d be writing that. 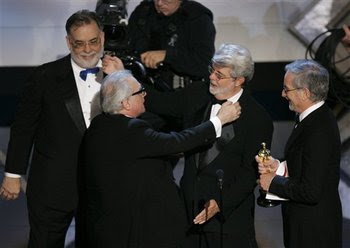 When Martin Scorsese finally won an Oscar last year the award was presented to him by Steven Spielberg, George Lucas and Francis Ford Coppola.

That wasn’t just a group of honored directors walking off the stage afterwards, that was what was once called New Hollywood.

The surviving members of the maverick auteur movement that saved the movies in the late 60’s and 70’s were still majorly representin.’

Of course we know where Marty’s at with his DeCaprio epics and rock docs, and Spielberg/Lucas, of course, we know what’s going on with them with the #1 movie right now, sure but what of Francis Ford Coppola?

Well, for his first film proper since 1997’s THE RAINMAKER it appears that he’s the modern movie maker equivalent to Sisyphus from Greek mythology.

If you don’t know, Sisyphus was a King cursed to have to roll a huge boulder up a steep treacherous hill, only to see it roll all the way back down again and then have to repeat this action til the end of time.

So Coppola, yet again at square 1 gives us this curious case - a movie about a 70 year old man struck by lightning that makes him young again and gaves him another chance at love and finishing his previous life’s philosophical work. 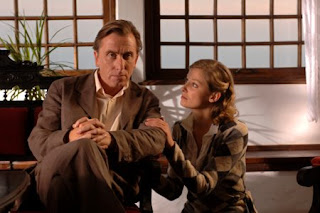 Tim Roth, as the old man turned young, has a gravitas and intensity apt for the part but the premise is far from satisfactorily played out. His tortured, and unfortunately tedious, time recovering in his hospital bed as too many headlines tell us the timeframe (World War II) takes away from the story’s momentum.

Roth meets Alexandra Maria Lara, (a stunning woman even when speaking in tongues) who also plays his lover from his early life, who is overtaken by the same lightning shining (or whatever it is) and they form a bond which of course becomes something more. The fractured-ness of the film gets a bit tiring - right when I was thinking ‘hey, that last shot didn’t make much sense’ Coppola starts showing shots upside down.

There's a lot that’s confusingly mismatched in the material here - I’m seriously unsure what the point was to a lot of it. I got that Coppola was trying make some sort of a new cinematic language (he says something like that on a “making of” featurette on the DVD) out of choppy yet beautful imagery interspersed with trying narrative introspection but come on!

There’s very little here that someone who is not a hardcore film buff would care to follow. 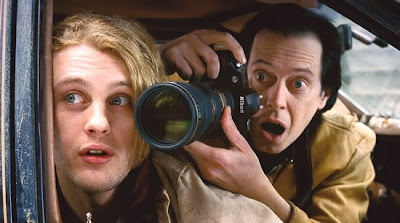 As I wrote before (Buscemi Now? – Dec. 17th, 2007) Director Tom Dicillo doesn’t think his film, which got good reviews, didn’t get a fair shake at the box office.

Well having finally seen it upon its recent DVD release I can honestly say he’s right. While no masterpiece it is a better than average independent movie that surely deserved better distribution and surely would’ve gained some audience support. 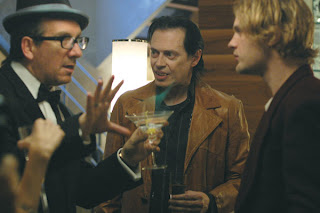 Michael Pitt plays Toby, a homeless 20something New York kid who by chance comes across a plethora of paparazzi waiting for a chance to photograph K’Harma Leeds (Alison Lohman) – the pop star flavor of the day.

After that shoot goes awry, Toby makes an unlikely friend in Les the acerbic (Steve Buscemi) who doesn’t consider himself to be paparazzi but a “licensed professional” and declares: “Rule #1: There are players and there are peons – I am a player.” That becomes a running joke as there are many Rule #1’s throughout the film as in “Rule #1: Never let a hooker slip you the tongue.” Les, for all his cynical arrogance prides himself on getting photos of Goldie Hawn eating lunch and Elvis Costello without his hat.

Toby as an unpaid assistant joins Les in his celebrity stalking quests and learns the tricks of the tawdry trade driving around in Les's beat-up station wagon, hauling around gear, and trying to crash into celebrity parties.

At one such event Toby gets swept up into K’Harma’s entourage. K’Harma and Toby hit it off back at her hotel while Les is left in the dust. Toby and Les patch things up the next day but then Les blows it by taking photos at K’Harma’s birthday party (of Elvis Costello!) that he weaseled his way into.

“Rule #1: Know where you belong” Les says but by this point Toby has tired of his teachings. Gina Gershon plays a sexy saavy sop opera casting director that helps Toby on to the ladder of actor success he longs for while Les (Buscemi in full bug-out mode) toils on the lowest rung.

The themes of parasitic tabloidism and the trials of being a celebrity in the spotlight are obvious but it's the chemistry between Buscemi and Pitt that makes this work.

Lohman’s diva issues with stardom are fairly transparent and there are some unneeded artsy interludes (such as the one with flower petals falling from the sky) but DiCillo has made a funny appealing film with a heart that beats through the equal measures of grime and glitter.

It would make a good double flipside feature with INTERVIEW - Buscemi’s fine film about a serious journalist having to do a piece on a B-movie/TV star (Sienna Miller). In my before mentioned Buscemi Now? post I said that Buscemi pulls off the task of being “extremely creepy yet incredibly lovable at the same time”, the same could be said about DELIRIOUS.