MOONAGE DAYDREAM: A Sensory Overload Of A Bowie Biodoc Blast

Now playing at indie theaters, multiplexes, and, with hope, an IMAX near you:
MOONAGE DAYDREAM
(Dir. Brett Morgen, 2022) 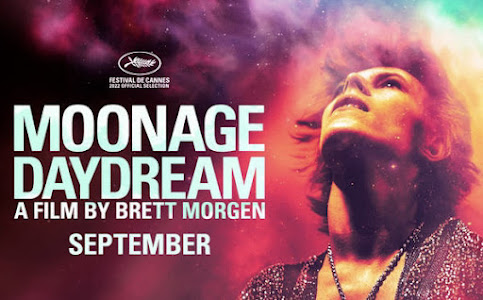 It’s fitting that preceding this film’s IMAX presentation, one has to wade through a bunch of trailers for upcoming sci-fi-themed blockbuster wannabes because Brent Morgen’s David Bowie biodoc (of sorts) epic posits its subject as an alien visitor who came and conquered our planet way back when.

Of course, that’s the premise of Bowie’s iconic 1971 album, The Rise and Fall of Ziggy Stardust and the Spiders from Mars, and it’s a great starting off point for this artsy AF two hour and 15 minute sensory overload of footage (both classic archival, and never-seen-before film and video), photographs, drawings, paintings, unpublished writings, interview clips, and every possible Bowie-related scrap of material imaginable.

Morgen, previously responsible for such top notch docs as THE KID STAYS IN THE PICTURE, and KURT COBAIN: MONTAGE OF HECK, sculpts a thriving portrait that captures Bowie’s career in an dazzling fever dream of a driving narrative that beautifully bathes the audiences in its immersive, non-stop imagery. It’s like the psychedelic sequence climax in 2001: A SPACE ODDYSEY became this Bowie movie, if you can go with that – I sure can.

In its opening set-up, we hear the voice of intellectual television personality Dick Cavett give the then up and coming glam rock star a colossal build-up intro on his 1974 talk show: “Rumors and questions have arisen about David, such as who is he, what is he, where did he come from, is he a creature of a foreign power, is he a creep, is he dangerous, is he smart, dumb, nice to his parents, real, a put-on, crazy, sane, man, woman, robot, what is this?”

Cavett, and a few other interviewer’s voices can be heard throughout the film, but it’s largely Bowie’s own softly spoken tones that take us through his journey or journeys as each incarnation whether it be Ziggy Stardust, Aladdin Sane, the Thin White Duke, Halloween Jack, or even the mainstream ’80s era “Let’s Dance” dude has his own intertwined path. Speaking of “Let’s Dance” – it’s far from my favorite Bowie, but cut to Morgen’s expertly edited montage of choreographed dance bits spanning our beloved entertainer’s career, it’s a joyous delight.

One framing device involves video of a bleached blonde Bowie from around the shooting of Nagisa Ôshima’s MERRY CHRISTMAS, MR. LAWRENCE in Java, in Indonesia in the early ‘80s. We witness a demure superstar-in-hiding casually walking around his hotel, and surrounding town, and get a sense of him as the genuinely open-minded, and curious chap that can make a big splash when he wants in an explosion of make-up, costuming, and ultra flashy theatrics, but somehow doesn’t come off pretentious when he tries to explain his artistic intents.

As for the music itself, Bowie’s incredible back catalog is well represented with booming live footage from familiar sources such as D.A. Pennebaker’s ZIGGY STARDUST concert doc (1973), Alan Yentob’s BBC doc, Cracked Actor; various music videos, and TV appearances in which such classics as “All the Young Dudes” (a hit he wrote for Mott the Hoople, but Bowie would reclaim live), “Life on Mars,” “Space Oddity,” “Changes,” and dozens of other crowd-pleasers are delivered in all their popping glory which kept my head bobbing throughout.

A powerful highlight for me was Bowie’s belting out a definitive rendition of his 1977 near standard “Heroes” to a mesmerized stadium of crazed fans on the Isolar II: 1978 World Tour. It’s a piece of grainy, dark film, but the clarity of Bowie’s tour de force performance is stunning, while the song passionately churns forward.

MOONAGE DAYDREAM obviously isn’t a conventional, straight forward documentary so don’t go looking for defined dates, details, or the chronological context - it does adhere somewhat to a timeline, but skips around within various eras - that other such films will provide. I consider it to be a living, breathing collage of the best bits of Bowie’s Sound+Vision manifesto that might bombard non believers, but will undoubtably satisfy long-time disciples, and bring new converts into the fold.

Having listened to Bowie for decades, and having had the immense pleasure of seen him live twice (in 1990, and 1995), I can attest that Morgen has amassed a spectacular sensory-overload of a portrait of an artist in his many primes. See it on the biggest screen you can, while you can, and let the children boogie.