Now playing at a indie arthouse or multiplex (mostly multiplexes) near you: 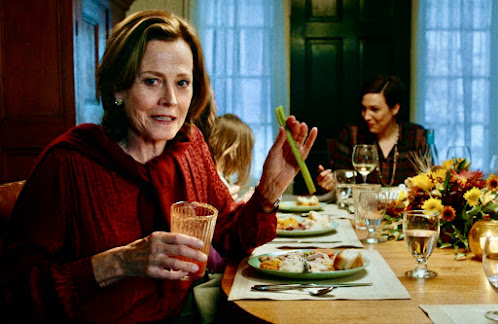 New England realtor Hildy Good is a very familiar character. As portrayed by a wickedly sardonic Sigourney Weaver, she could be a younger third wheel to Jane Fonda and Lily Tomlin’s Grace and Frankie, as she also had a homosexual hubby for decades, with her denial over her excessive drinking likewise being par for the course (“I was born three drinks short of comfortable, that’s all,” she confides).
The 72-year old Weaver breaks the fourth wall to bring us into her world, in which she drives around the fictional seaside town of Wendover, Massachusetts (looks exactly like MANCHESTER BY THE SEA) stressing about her struggling real estate agency, schmoozing with potential clients, and pretending that she’s living a sober life after an intervention from her constantly fretting family.
But Hildy has been enjoying multiple glasses of wine in cozy night hangs with her friend Rebecca (Morena Baccarin), who is having a secret affair with a local psychiatrist friend of Hildy’s (Rob Delaney). Our lush of a lead is also having romantic thoughts about an old flame named Frank, played by a crusty Kevin Kline, who previously starred with Weaver in DAVE (1993), and the ICE STORM. Kline’s scruffy construction contractor character is a welcome sight right off the bat, essentially summoning an older version of his persona in THE BIG CHILL as he dances to the Zombies’ “Time of the Season” at the gas pump.
After telling us that “Thanksgiving is a lot to ask of a sober person,” Weaver’s Hildy sneeks vodka throughout the holiday dinner evening with her ex-husband (David Rasche), her daughters (Rebecca Henderson and Molly Brown), but the evening goes by without incident, charmingly even, until her shaky drive home, that we learn the next day she blacked out on.
Another thing about Hildy is that she’s a descendant of the Salem witches, and has slight psychic abilities, but this isn’t a fleshed out element, and only serves for a connection in the third act conflict involving a missing child. Considering all of Hildy’s issues, intertwining a tinge of the supernatural in her milieu seems a bit silly, but perhaps it had more meaning in Ann Leary’s original novel.
The love story between Hildy and Frank injects some kooky charm into the proceedings as Weaver and Kline have a cute, lived-in chemistry, but their romance, or fling, seems more like a subplot, or sideline that could’ve been cut, and not affected the rest of the narrative much.
There’s enough juiciness in its wit and warmth to recommend THE GOOD HOUSE, but its real merit is in what Weaver brings to it. It’s surprising that the iconic actress has never won the Oscar in her career over half a century, especially as she’s won nearly every other award (Golden Globes, BAFTA, Screen Actors, even a Grammy). This film, even if it doesn’t make much of a splash, could lead to her fourth Academy Award nomination when her peers give their For Your Consideration screener of it a whirl.
Deserving nomination or not, Weaver, with just a little help from an in-his-aging-element Kline, and a capable but unspectacular supporting cast, elevates this light comic addiction drama with her “Yankee stiff upper lip,” as Frank calls it.
As I’m a former drinker, Hildy’s brand of denial hit home for me with cringy moments like of the secret drinking during Thanksgiving scene, and I so hated that I related to her lying exchanges with concerned friends and family, but by the end, I was content with my time with the actress/character, and didn’t mind that the mechanics of the movie that houses her weren’t up to her scale.