CLERKS III Is For The Hardcore, While The Rest Of Us Will Cringe Hard 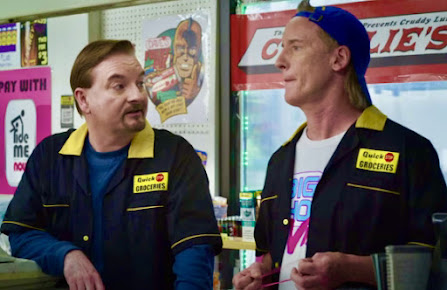 “Whatcha looking at? That’s how we did it in the ‘90s, son!” yells Jason Mewes through his creepily perfect white AF teeth in what feels like his 1000th performance as the obnoxious drug-dealer Jay early on in the third installment of Kevin Smith’s CLERKS, releasing this week through Fathom Events (Sept. 13-18).

Thing is, everything in this, maybe the most unnecessary sequel in the history of unnecessary sequels, is how Smith did it in the ‘90s. Smith’s filmmaking skills have barely progressed from 29 years ago, nor has his dialogue which revels in the same old scatological concerns designed for teenaged senses of humor, and we’re just yet again given characters going through the get-your-shit-together motions with a lazy, yet good natured run through skit-like scenes.

These characters, our returning leads Dante (Brian O’Halloran) and Randal (Jeff Anderson) begin the trilogy finale where they left off in CLERKS II, working at the QuickStop, bitching about pop culture, and passing time playing hockey on the roof with what looks like the cast of Smith’s AMC show, Comic Book Men. In the 15 years since the second one, Dante’s wife Becky (Rosario Dawson) has passed along with their unborn daughter so there’s that potential emotional element.

In the middle of a sloppy religious discussion (including a “Bourne Nativity” trailer joke), Randal suffers a heart attack and is rushed to the hospital where he’s operated on by Amy Sedaris as a wise-cracking doctor. While recovering, Randal has the impulse to find his purpose in making the movie of his life, a movie about a guy who works in a convenience store with “all of the shit you and I have said sitting at this counter, they’re all scenes now,” as he tells a skeptical Dante.

Obviously, the low concept premise is that Randal is going to make the original movie CLERKS, so the film goes all meta with bits that recreate the making of the 1994 production but with Randal in the Director’s chair (Smith’s Silent Bob serves as the cinematographer). Meanwhile, a long grief-stricken Dante visits his wife’s grave for a pep-talking cameo by Dawson, which triggers major O’Halloran crying action, the waterworks of which flow through a lot more of the movie than a CLERKS sequel should allow.

Speaking of cameos, we’ve got a slew with the obligatory wacky auditions sequence in which the immortal CLERKS line “I’m not even supposed to be here today,” and then other random movie lines are spouted by slumming-it celebrities Fred Armisen, Danny Trejo, Sarah Michelle Gellar, and Freddie Prinze Jr., with an appearance by longtime Smith crony, Ben Affleck, who always pops up in every View Askewverse entry, to do some lines from MEET THE PARENTS for some reason.

When Marilyn Ghigliotti returns as Dante’s ex-girlfriend, Veronica, from the original, she is seen shooting her scene as her 61-year old self, but Randal’s film captures her and O’Halloran in their grainy black and white youth in, of course, footage from CLERKS. Other bit players from CLERKS show for similar b & w scene recreations, and it’s a cute conceit, not without its charms, but it can’t help from feeling icky in an overly sentimental, self-celebratory way.

Dante really nails it when he says Randal’s film project will “cinematically suck his own dick,” so at least Smith is up front with this self love intent. And maybe all this revisionism its so that Silent Bob can now be skinny in his redone part as Smith hasn’t been too fat to fly Southwest in a long while.

The third act involves more trouble in bromance land as Dante and Randal get into a climatic argument about their strained friendship, and this results in another epiphany for about the real subject of Randal’s CLERKS redux. This is all very talky material which mostly rolls along, but there’s a tone deaf and forced feeling to interactions when other people enter the main duo’s frame.

That aside, the ginormously overriding issue with CLERKS III is how achingly unfunny it is. The overly hip talk falls flat, lame one-liner after another, and every attempt at gags, like a subplot about QuickStop co-worker Elias (Trevor Fehrman, an unfortunate holdover from CLERKS II) selling Christ-themed crypto-kite NFTs, just resulted in some of the biggest cringes I’ve experienced in my entire movie-watching history.

However, if CLERKS is a favorite movie of yours, then this style of fan service might just be your thing. I enjoyed the amusingly raw 1994 original, and a few of Smith’s other films over the years, but I don’t have the emotional connection needed for this final (I hope) hang with the convenience store crew to resonate. The fates of Anderson, who largely doesn’t have a film career apart from his work as Randal in this franchise, and O’Halloran as these supposedly lovable losers just doesn’t hold much weight for me these days, especially with the lack of genuine laughs.

But while I found CLERKS III to be an ultra cringe-fest of masturbatory movie-making, the one endearing takeaway I can gather is that at least Kevin Smith never forgets who his friends are.