THE WRATH OF KHAN Is The Greatest Piece Of STAR TREK Property Ever: A 40th Anniversary Post 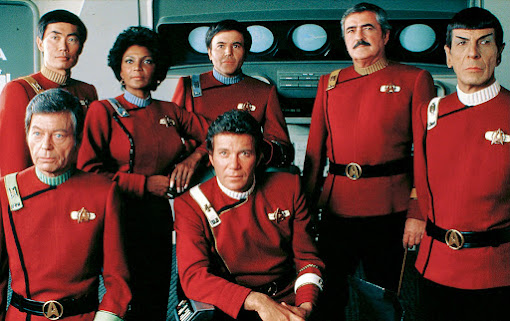 Since its inception in 1966, there have been eight live action Star Trek series from the three season run of 79-episodes on NBC to the first season of the new Strange New Worlds series on Paramount+, three animated series from the short lived early ‘70s incarnation with the original cast to the more recent offerings like Lower Decks and Prodigy (also Paramount+ productions), and 13 movies from THE MOTION PICTURE (1979) to the rebooted run launched by J.J. Abrams in 2009.

But no matter how many more versions of Gene Roddenberry’s creation we will be inundated with in the future, one thing I’m betting will still be certain - the single greatest property in the entire franchise will remain to be: STAR TREK II: THE WRATH OF KHAN (1982).
I’m making this declaration, which I believe won’t be a controversial opinion, because today is the 40thAnniversary of the release of the acclaimed sequel, and the film’s status as the best, most satisfying piece of the Star Trek Puzzle should be celebrated on this milestone.
The first film in the franchise, Robert Wise’s STAR TREK: THE MOTION PICTURE, was a bit of a let down for fans, as it was criticized for being too cerebral instead of action-oriented, too special effects-driven instead of story-driven, and, most sadly, too long and boring to be a major sci-fi player in the era of the whiz-bang of STAR WARS.
But for the follow-up, the filmmakers, headed by Nicholas Meyer as director, and Jack B. Sowards as screenwriter, got back to basics by making the film not just the sequel to the first film, but also a sequel to one of the original episodes of the ‘60s series: “Space Seed,” which featured Ricardo Montalbán as 20th century genetic superman Khan Noonian Singh. After Khan attempted to take over the Enterprise, Captain Kirk sentenced him and his crew to inhabit a dying world in order to create their own society, but in the 15 years since their exile, the terrain was laid to waste by a nearby planet exploding, and Khan has vowed revenge on Kirk should their paths cross again. 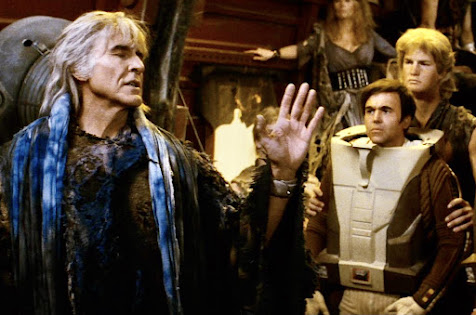 This happens when executive officer Chekov unwittingly discovers Khan and company’s location while on a mission, and he steals their starship, and sets after Kirk while spouting such delicious dialogue as: “I’ll chase him around the Antares maelstrom and round Nibia and round Perdition’s Flame before I give him up!”
Kirk, now an admiral, and his trusty crew including Mr. Spock (Leonard Nimoy), Dr. McCoy (DeForest Kelley), Mr. Scott (James Doohan), Mr. Sulu (George Takei), Lt. Uhuru (Nichelle Nichols), and the aforementioned Chekov (who wasn’t even in “Space Seed” but was still recognized by Khan), in the Enterprise go up against Khan in the stolen starship Reliant in a series of compelling battles that are matched with compelling exchanges that make up the sharpest, and most powerful screenplay that’s ever graced a STAR TREK movie.
Another powerful factor in the film’s success is William Shatner’s performance as Kirk. Director Meyers forced Shatner to do take after take until his patented over-acting mannerisms had faded, and some more solid, serious acting could go down. Without a doubt, it’s the man’s finest work on screen. O Captain! My Captain! Indeed. 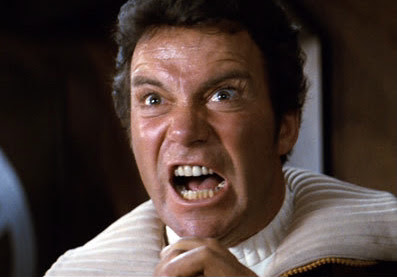 As a kid, STAR TREK II was a godsend. If you think that before it appeared, there was only the three seasons of the original series, and one boring movie – the budding franchise was in its awkward phase until KHAN came along. Then the whole enterprise (sorry) was up and running. The sequels that followed were hits largely beloved by critics and fans, and the many spin-off series that came after added greatly to the overwhelming oeuvre , and it’s very possible that none of it would’ve happened without STAR TREK II.
One funny thread that ran through the classic ‘90s sitcom, Seinfeld, had to do with Jerry’s belief that the 1982 sequel was “the best of those movies.” In the eighth season episode, “The Foundation,” Jerry quotes WRATH OF KHAN at the funeral of his best friend’s (George Constanza played by Jason Alexander) fiancée, telling the parents of the deceased that she’s not dead if we remember her, which paraphrases a line said by McCoy about Spock’s death. Later in that ep, George recreates Kirk’s classic “KHHHAAAAAAAAAAAAANNNNN!!!!!!!!” yell:
Perhaps the best, and funniest Seinfeld/Star Trek moment is when Jerry and George show more emotion over recalling Spock’s death in KHAN than they did at the funeral they just attended. George: “It was a hell of a thing when Spock died.” Jerry: “Yeah.”
When J.J. Abrams took the helm of the STAR TREK movie series, rebooting it in 2009, there was much talk that he was more of a STAR WARS guy (he would later go on to make two of those movies), and that the only Star Trek he was familiar with was KHAN. This is a convincing theory as the two TREK movies he made have heavy callbacks to KHAN, including scenes that are directly remakes of scenes in the original film, and the resurrecting of the supervillain character by way of a far inferior version provided by Benedict Cumberbatch. You can read more of my bitching about Abrams’ KHAN misfire in my review of STAR TREK INTO DARKNESS from 2013.

So 40 years to the day after its release, STAR TREK II: THE WRATH OF KHAN still remains as the greatest story/entry/production/whatever in the vast Star Trek multiverse. If you don’t believe me, go to Paramount+ and watch, or re-watch, the movie I’ve been babbling about for the last over 900 words. After that, can you really tell me that’s there’s better Star Trek than that? I think not.
More later...
Copyright 2004-2018 Daniel Cook Johnson at 7:47 PM