Opening tonight at a multiplex near you: 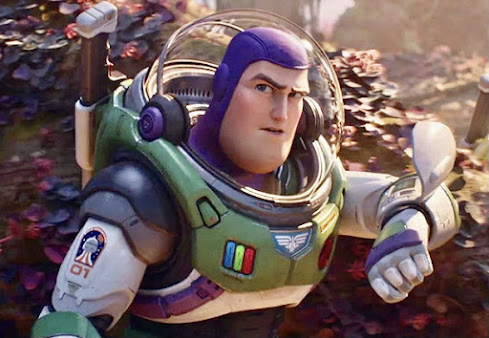 For those who are wondering why Chris Evans is voicing Buzz Lightyear in this TOY STORY spin-off, and not Tim Allen, it’s because in the TOY STORY series, Allen is the voice of an action figure based on an astronaut character that was the star of a movie that was popular in the shared TOY STORY universe.

So, as an opening disclaimer tells us, this is the movie that the toy-owning kid, Andy Davis, saw in 1995, that made him want the Buzz Lightyear toy, and the rest is DISNEY/PIXAR history!

As voiced by Captain America himself, Evans’ version of the character isn’t the self-satirical, goofy concoction that Allen gave us in four films (plus lotsa short films, and video game appearances); he’s a driven, fearless, and earnestly heroic construction.
But while that hardened persona makes this Lightyear a sturdy, serviceable action protagonist, it also makes him to be, well, a kinda boring guy. Evans is a solid, likable presence in the role, but it’s a generic alpha male voice however you cut it.
The immaculately animated film posits Buzz and his fellow Space Rangers getting stranded on a hostile planet in which they have to constantly fight off alien tentacles that comically appear to drag off people out of shot. Buzz attempts to save the colony by testing a new hyperspace crystal in a four-minute space flight, but fails, and finds that it takes him four years into the future.
However, Buzz doesn’t give up, and he tries to pull off the hyperdrive over and over, failing every time, and sadly sees his best friend, Commander Alisha Hawthorne (Uzo Aduba) age over time - getting married, having a child, having a grandchild, growing old, and passing. This makes for the movie’s most effective emotional material, but, it’s no UP when it comes to real tearful time-moves-on impact, that’s for sure.
This is all setup for the premise of Buzz joining up with the granddaughter of Alisha, Izzy (Keke Palmer), the clumsy Mo Morrison (Taika Waititi), and ex-convict Darby Steele (Dale Soules) to save the colonists from an evil robot, Emperor Zurg, whose star-destroyer-style ship is hovering above their city that’s trapped inside a big-ass lazer dome.
The principle source of comedy in LIGHTYEAR comes from Sox, Buzz’s robot cat companion. Voiced by Pixar veteran Peter Sohn, Sox does provide a number of funny moments - I enjoyed his firing of knockout darts at attackers (“I bought you five minutes”) – but he’s a pretty predictably cutesy element that teeters on the edge of wearing out its welcome throughout the adventure.
And maybe I was bothered that the design for Sox reminded me too much of BRIGSBY BEAR.

LIGHTYEAR’s greatest strength is its wondrous imagery. When the visuals aren’t focused on the characters, and function as foregrounds, they are as convincing as live action cinematography in every detail. The scores and scores of digital artists, whose names you’ll have to get through to get to the post-credits stinger, really outdid themselves here.
Unfortunately all the eye-popping majesty on display doesn’t add up to the movie magic needed to make LIGHTYEAR a truly memorable, special experience. It’s fine as throwaway summer blockbuster fare, but it doesn’t make for a must-see origin story, or anywhere near an essential Pixar production.
Audiences will likely find it entertaining enough, and probably won’t care that it doesn’t go to infinity and beyond, as long as it’s an hour and 40-minute distraction from the heat, or the January 6 hearings, or gas prices, or…well, whatever real world crap you want to escape.
More later...
Copyright 2004-2018 Daniel Cook Johnson at 1:07 PM