Centrifugal Fun In The Cinema & TV! 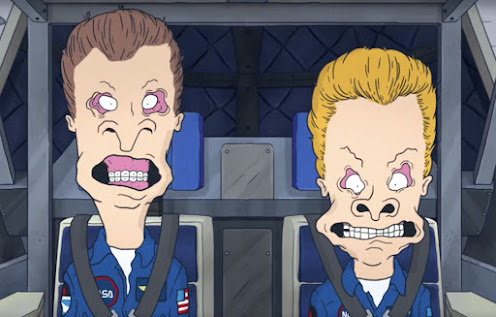 While watching the new movie, BEAVIS AND BUTTHEAD DO THE UNIVERSE on Paramount Plus, I found myself triggered into a series of film scene flashbacks. All because of an early sequence concerning the Mike Judge-created characters undergoing training for a space mission at NASA. Now, we’ve gone through these motions in the movies many times so the sight of seeing Beavis and Butthead going through G-force training, meaning being placed in a centrifuge which simulates the 9G forces pilots would encounter while flying is beyond commonplace in these scenerios. 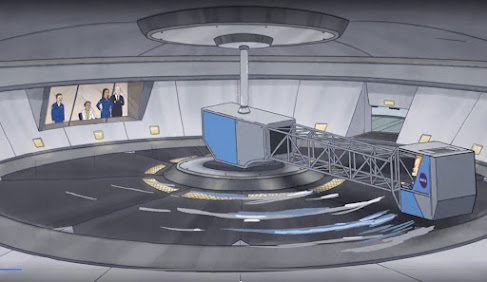 So this process, which is to prevent G-induced loss of consciousness, and extend G-tolerance in astronauts and pilots, has been often used as a delivery device for face-stretching sight gags like we see once more with our dumbass heroes. 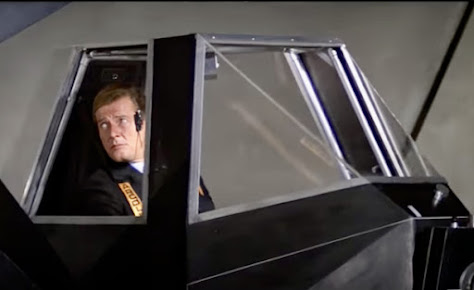 Centrifuge G-force training widely became a popular training procedure in the ‘70s, in which it scored some big screen action in Lewis Gilbert’s MOONRAKER (1979). This was the James Bond entry in the great STAR WARS sweepstakes of the era, so there’s a scene early in the film where Roger Moore’s 007 takes a centrifuge ride in a chamber at the villain’s space industries compound. Being Bond, his spin is sabotaged by one a henchman, and the speed dangerously increases so he has to use a gadget (a watch with a dart gun) to escape. 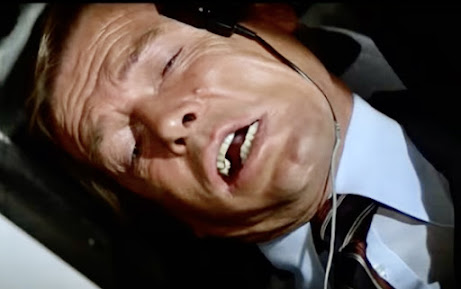 This scene is played for suspense, and drama – it’s actually one of the few times in the series where Moore’s Bond appears vulnerable, actually shaken and stirred – but it introduces the comic premise that’s been previously identified as “centrifugal farce.”

This comic concept is described by tvtropes.com as being when, “characters subjected to the centrifuge will appear to be traveling at ludicrous speed, complete with comically flapping cheeks, eyeballs bugged out, and squashed faces.”
John Landis’ SPIES LIKE US (1985) contains a definitive example of centrifugal farce involving facial foolishness from the likes of Dan Aykroyd and Chevy Chase: 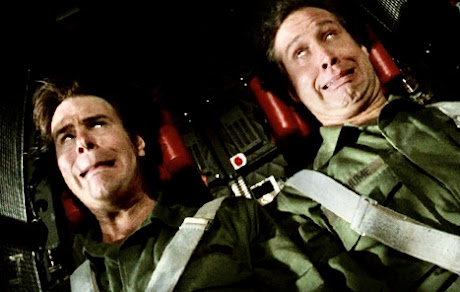 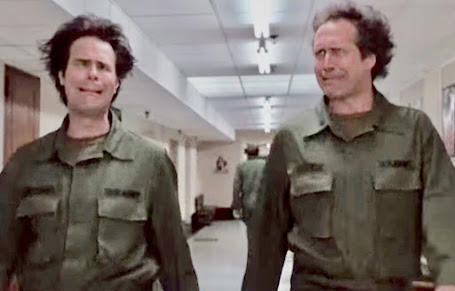 In 1995, the ginormous event of Homer Simpson flying to the stars in the season five Simpsons episode, “Deep Space Homer,” was also accompanied by some centrifugal farce. Unfortunately it makes for a rather poor sight gag in which Homer’s face becomes like Popeye’s – a gag that the DVD commentary revealed was not a favorite of Simpsons creator, Matt Groening’s.

And this one from Clint Eastwood’s SPACE COWBOYS:

Okay, so that’s centrifugal farce. You can now go about your day.