That Time The Clash Did A Diss Track On Roger Moore 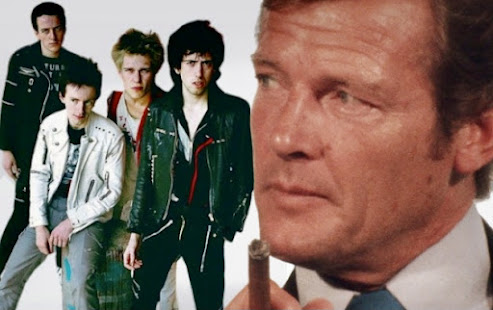 While many of the songs in the all-too brief repertoire of the punk icons, The Clash, are rock classics, there are a handful of lesser known tunes by the British band that are really worth seeking out. One such is a non-album track that only appears on the 1991 box set, The Clash on Broadway, entitled “One Emotion.” It’s an outtake from their second album, Give ‘Em Enough Rope (1978), and it’s a pleasingly punchy number that was amusingly inspired by the acting styling (that’s right, one styling) of Roger Moore.

Moore famously portrayed the legendary secret service agent James Bond in seven films from 1973-1985, but there is some dispute by the song’s writers, Joe Strummer and Mick Jones, about whether it was Bond or Moore’s earlier role as Simon Templar in the TV series, The Saint(1962-69), that sparked the song into existence.
In excerpts from the booklet for the Clash on Broadway box, Strummer recalls, “The phrase ‘One Emotion’ came when we were watching Roger Moore. I think it might have been reruns of The Saint, it struck us how one dimensional he was. Then we wrote a more serious song around it, trying to jib our way out of a hole.”But Jones offers alternate facts: “We used to nip in the cinema just to catch a film in our spare time. I think it was Roger Moore in a really bad James Bond film.”At the time of the Clash’s recording of “One Emotion” in 1978, the most likely Bond movie to be playing in British cinemas was 1977’s THE SPY WHO LOVED ME, which wasn’t a really bad Bond film in my, and many critics and fans’ minds (it’s even Moore’s personal favorite of the 007 films he made), but still may have been seen as establishment dreck by Strummer, Jones, and their bandmates, Paul Simonon, and Nicky “Topper” Headon. But reruns of The Saint were possibly prevalent during that period as well, so it’s plausible that it was a combination of these influences that gave the song its title and hook. A promotional disc for the Clash on Broadway collection featured a soundbite of Strummer talking about the song, but this time he said it was from the gang watching a James Bond movie on television, and that it was Jones that exclaimed, “This guy’s only got one emotion!”
The song is worth YouTubing as, aside from the Moore takedown, it’s an infectious performance that captures the early Clash sound in all its edgy punk pop purity.
Check it out:
One of the first concerts I ever attended was the Clash at Carmichael Auditorium on the UNC campus in my hometown of Chapel Hill, N.C. on April 6, 1984 (tickets were $11.50!). Now this was the band on their last legs as Jones, and Headon had left, and Strummer and Simonon were joined by hired hands Pete Howard, Nick Sheppard, and Vince White, but it was still The Clash, and therefore a rousing, thrilling experience for my 13-year old existence.

I vividly recall was that there was a wall of television sets on the stage behind the band that were all showing news clips of war footage, and other violent events to punctuate the power of the Clash’s performance. A bit of film that repeatedly appeared interspliced into the mix of vicious visuals was a moment from the 1965 James Bond smash, GOLDFINGER, in which Sean Connery is engaged in a fight with the villain’s henchman, Odd Job in the vault at Fort Knox.

I think that makes it pretty damn obvious which Bond the Clash really preferred.
More later...
Copyright 2004-2018 Daniel Cook Johnson at 12:21 AM