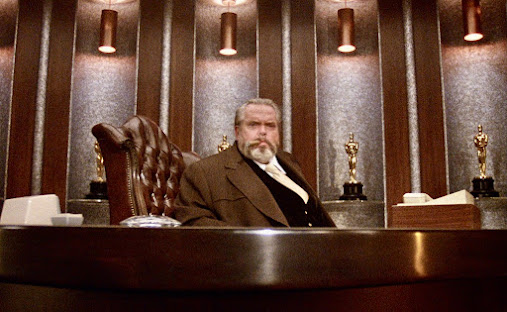 Today, Film Babble Blog is celebrating the posthumous Birthday of one of the all-time greats, Orson Welles, who was born on this date in 1915.
So I’m going to pay homage in this post by looking at one of his less celebrated, but still mighty worthy, moments: Welles’ cameo in James Frawley’s 1979 family comedy classic, THE MUPPET MOVIE.
Since his passing in 1985, the legendary status of the writer/director/actor/ producer has grown into mythic proportions. This is largely due to the insurmountable acclaim that his 1941 masterpiece, CITIZEN KANE, has never stopped accumulating, despite the fact that there are, and have been many younger generations that have questioned its regular placing as the greatest film in movie history. Those fools.
But before I knew any of this, my first introduction to the larger than life icon came when I was an eight-year old kid when my grandmother took me to see THE MUPPET MOVIE in the summer of ‘79. The film, the Muppets’ first feature, was an origin story that told how Kermit the Frog journeyed across country from a Florida swamp to Hollywood to seek fame and fortune, while forming major bonds with such felt friends as Fozzie Bear, Gonzo The Great, Rowlf the Dog, the Electric Mayhem, and, of course, Kermit’s blustery love interest Mrs. Piggy.
The Variety ad that Kermit was answering actually stated “World Wide Studios announces open auditions for frogs wishing to become rich and famous.” So the talented banjo-playing frog, figuring if they need frogs, they must need bears, pigs, dogs, etc. (which is sound logic), after wacky road trip adventures, shows up at the office of studio head, Lew Lord portrayed by a 63-year old, bearded, cigar-chomping, and very intimidating Orson Welles.
Watch the scene:
After regaining his composure from Lord’s initial harsh, and judgemental expression upon the Muppets’ entrance into his opulent office, Kermit says, “Please Sir, my name is Kermit the Frog, and we read your ad, and we’ve come to be rich and famous.”
After removing his cigar from his mouth, and giving the situation a hard, deep, yet comically brief pondering, Welles' Lord intercoms his secretary, “Miss Tracy, prepare the standard ‘Rich and Famous’ contract for Kermit the Frog and company.”
Kermit and company didn’t even have to audition at all to get green-lit by Lord and World Wide Studios, which, I guess, proves the adage “90% of success is just showing up.”
Welles’ powerful studio chief character was based by screenwriters Jerry Juhl, and Jack Burns, on British media mogul Sir Lew Grade, who gave Jim Henson, and The Muppet Show a big break in real life. The role was also notably empowering for Welles as he had spent the ‘70s (and much of his life after KANE) as an outcast from, and yet still inside Hollywood, hustling for financing for various dream projects, surviving by doing wine commercials and other cameos, while being ridiculed as a one of the industry's most notorious has-beens.
To see what Welles would’ve looked like as a towering titan of Tinseltown in his MUPPET MOVIE cameo is a beautiful thing. I, for one, want to live in that alternate universe where Welles had a colossal career in which he never had to fight for final cut, and was able to produce a rich filmography instead of the meager dozen or so movies he directed in our universe. 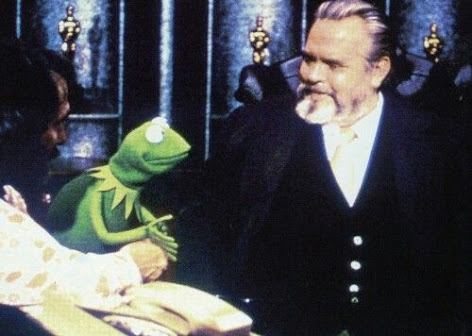 Welles’ love for the Muppets extended to a pilot episode of a never aired 1979 TV talk program, The Orson Welles Show, in which he interviewed Henson, Frank Oz, and the main Muppets. The footage from the show wasn’t available for decades, but due to the magic of YouTube, you can watch an excerpt of it here.
One of the wonderful benefits of seeing THE MUPPET MOVIE with my Grandmother was that she clued me into who the old stars putting in the cameos were like Bob Hope, Edgar Bergen (and Charlie McCarthy for that matter), Milton Berle, and Mel Brooks. But Welles made the biggest impression, maybe because he was literally the largest performer involved, but more the stature, and gravitas in how they presented him.
I had never laid eyes on Welles before his crucial scene in THE MUPPET MOVIE, but my eight-year old mind immediately knew that this was *somebody* incredibly important, and that I should take note. It was the beginning of my fandom for the man, and his movies, and, looking back, I can’t think of a better introduction for a kid poised for a life of loving film.
Happy Birthday in the afterlife, Mr. Welles. Maybe you didn’t reach the height of running a major film studio with the power to make a frog, and his buddies the biggest stars in the world, but for a brief, shining instance it looked, and felt like you did, and that’s how I choose to remember you.
More later...
Copyright 2004-2018 Daniel Cook Johnson at 5:46 PM