DOCTOR STRANGE 2: With Sam Raimi At The Helm, I Expected More MADNESS

Now playing at a multiplex in a multiverse near you:

DOCTOR STRANGE IN THE MULTIVERSE OF MADNESS 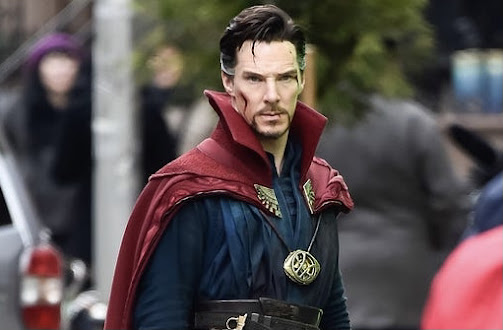 It’s not surprising to me that my first press screening since The Before Times would be for a Marvel movie.

That’s obviously because there’s so damn many of them – case in point, this Doctor Strange sequel is the 28th film in the MCU (Marvel Cinematic Universe). It’s also the sixth time that Benedict Cumberbatch has portrayed the titular master mystic as, apart from his 2016 stand-alone adventure, he has appeared in two AVENGERS movies, one THOR entry, and only several months ago was a major player in the super successful SPIDER-MAN: NO WAY HOME.

So why does the character still not feel fully fleshed out to me? Cumberbatch brings the wit, and all the clever charisma he can muster, but his Dr. Stephen Strange still seems to stiffly be going through the Marvel movie motions in yet another overly familiar formula film. But what’s most surprising here is that this is the return of comic horror filmmaker extraordinaire Sam Raimi. Since Raimi’s last movie, 2013’s OZ THE GREAT AND POWERFUL, wasn’t that great and/or powerful, I was both hoping for a big comeback, one that would re-establish the man’s credentials for batshit-crazy cinema, but alas the supposed madness that the title boasts is severely muted due to the lack of pure oomph in the project.

It was difficult for me to care much for the plot that somehow involves a new, well, new-to-me character, America Chavez (Xochitl Gomez) whose power of being able to travel through the multiverse is being sought by Wanda Maximoff (Elizabeth Olsen) so this keys into last year’s Marvel TV series WandaVision. It’s one of the film’s only inspired moves to make Olsen’s Scarlett Witch into the villain here, but her motivation – i.e. needing to stay with her kids in their universe at all costs – doesn’t make for really riveting stakes.

Like in the first DOCTOR STRANGE, there are a variety of arresting visuals, and a lot of immersive imagery, courtesy of literally thousands of digital artists whose names you’ll have to wait for to get to the obligatory post credits stinger, but in our current world of blockbusters, where even many bad films are graced with stunning effects, those descriptors mean less and less as accolades.

Cumberbatch does an admirable job pulling triple duty as he plays alternate universe versions of Dr. Strange: Defender Strange, Zombie Strange, and Strange Supreme, but the character himself is strangely lackluster overall. The supporting cast, well, supports adequately with turns by returning cast members Chiwetel Ejiofor as Karl Mordo, and Rachel McAdams as lost love interest Christine Palmer being the stand-outs.I just wish Raimi had thrown the superhero conventions out the window, and did a deep dive into the possibilities of loco landscapes, infinities of insanity, and nutso narratives. Has his younger self’s go-for-broke hunger that resulted in the over-the-top EVIL DEAD series really been completely satiated? If it doesn’t rear its head in a movie so calling for some “next level shit” ambition, when will it get another chance to thrive?

But while it consists of more exposition than explosions, DR. STRANGE IN THE MULTIVERSE OF MADNESS is a serviceable vehicle in the franchise, but maybe it would’ve been better broken down, and embellished into another streaming Marvel television show. It simply doesn’t fare any better or worse than what Disney+ has been serving up on that front recently.

Raimi’s workmanlike DOCTOR STRANGE sequel will unlikely be remembered much by me or many other movie-goers in the future except as just another chapter in the never-ending MCU. Perhaps the most telling factor is in a previously reliable element that Raimi fans will be anxiously awaiting upon viewing this movie – the Bruce Campbell cameo. That even that moment doesn’t truly deliver sadly says it all about Marvel Movie #28.