ROGUE ONE: A STAR WARS STORY Is EPISODE 3½: AN OLD HOPE

Opening this week at every multiplex from here to a galaxy far, far away:

ROGUE ONE: A STAR WARS STORY 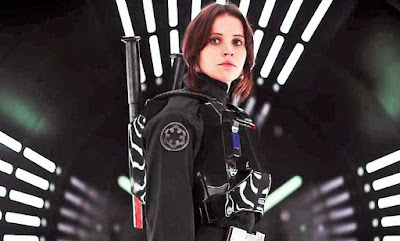 This is the first live action STAR WARS movie to not have a crawl, you know, the expository yellow text that ascends to a vanishing point in space, at the beginning.

That is pretty fitting because this film is based on part of the crawl from the original 1977 STAR WARS (still not calling it A NEW HOPE, dammit!), which stated: “Rebel spaceships, striking from a hidden base, have won their first victory against the evil Galactic Empire. During the battle, Rebel spies managed to steal secret plans to the Empire’s ultimate weapon, the DEATH STAR…”

So it would seem weird to have text giving us any more background to this STAR WARS STORY, a denotation that means this is a stand-alone tale set in the same galaxy far, far away, but not part of the “Skywalker Saga” – i.e. the biggest sci-fi franchise in the history of cinema that I'm betting you've heard of.

Still, ROGUE ONE may be touted as a stand-alone story, but it’s entirely tied to the events in the first film with tons of call backs (call forwards?), reprised characters, and familiar elements that show that director Edwards and his crew know the “Star Wars: The Complete Visual Dictionary” from front to back and beyond.

This entry is set between the end of the prequels and the beginning of the original, and I mean the very beginning of the original as it ends mere moments before Episode IV begins. I won’t spoil it, but the very last shot of this film is going to be put through the ringer by fans – forget the iconic shot of Luke Skywalker at the end of THE FORCE AWAKENS, this moment will be the stuff of a million memes.

But let’s go back to the start of this film, which opens with a stellar scene involving a family of farmers living on yet another desert planet (there are captions stating the names of a bunch of planets throughout the movie, but I have forgotten all of them). We learn that farmer Galen Erso (Mads Mikkelsen) used to work for the Empire as a scientist who helped design the Death Star, but was conflicted about it so he deserted the project.

An Imperior Officer named Orson Krennic played with terrific Australian smarm by Ben Mendelsohn shows up with a squad of Death Troopers to try to coax Galen back to work, but he refuses so they kill his wife Lyra (Valene Kane), while his daughter Jyn (Beau Gadsdon) goes into hiding.

Jyn, who grows up to be Felicity Jones, is the heroine here who gets arrested by the Rebel Alliance because of her father’s crimes, and is forced to track down her former mentor/father figure Saw Gerrera (Forest Whitaker). She learns from Gerrera, via a hologram of her father that he deliberately placed a flaw in the Death Star * so that it could be easily blown up (that explains that!), but she can’t convince the Rebellion to go after the plans.

Jyn rebels against the Rebellion with a team made up of Diego Luna as the rebel captain Cassian Andor, a wise-cracking robot named K-2SO (voiced by Alan Tudyk, who seems to be the film's sole source of comic relief), a Force believing warrior named Chirrut Îmwe played by Donnie Yen, and Jiang Wen as Chirrut’s partner, the heavily armed assassin Baze Malbus to travel to the tropical planet Scarif (okay, I had to look that one up), where the Death Star was constructed, and steal the movie’s MacGuffin.

Of course, the adventure is augmented with the expected blaster battles that result in piles of dead Stormtroopers, dogfights between old school X-Wings and Tie Fighters, and the sure to be fanboy-gasm inducing return of the AT-AT Walkers, you know – the giant four-legged combat vehicles from THE EMPIRE STRIKES BACK.

Jones carries the caper with a strong determined performance, and she has chemistry with her co-star Luna, but I really didn't connect with them or any of the other characters enough to be genuinely invested in their fates. They were mainly just pretty, young cogs caught up in story mechanics that I watched like I'd watch avatars in a video game that someone else was playing.

One of the most surprising choices made here is that they brought Peter Cushing back from the dead through CGI to once again embody the villainous Grand Moff Tarkin with his voice provided by a superb sound alike. This digital effects works in brief instances, but they rely on it a bit too much in this film so there are glaring moments in which it looks like grotesque animation instead of a convincing Cushing.

They should of stayed more with Mendelsohn, who really sinks his teeth into his role, being the central villain of the piece with Tarkin sparingly hovering in the background.

But despite that and a few other distractions, overall the visuals in this film are largely eye-poppingly spectacular particularly in the climax which juggles a few scenerios deftly without clutter. There are some brilliant moments in which the vast ILM computer graphics department succeed in making mass destruction cinematically poetic. Star destroyers crash together in a more realistic looking way these days too.

On another spoilery front, folks wanting to spend a little time with Darth Vader (thankfully again voiced by James Earl Jones) will likely be satisfied with his appearance as well.

I enjoyed large chunks of ROGUE ONE, but I didn’t have as much fun with it as I did THE FORCE AWAKENS. Sure, many validly dissed Episode VII for being little more than a loving retread of the original ’77 formula, but it had such a great gusto going in bringing back the tone, and ole timey space opera magic that was severely lacking in the prequels (plus I loved running around with Han Solo through Imperior corridors one last time).

This prequel though is a lot better than any of the trilogy of prequels that George Lucas made (and it's a lot better than Edwards' GODZILLA), owing to it having much sharper writing (courtesy of Chris Weitz and Tony Gilroy who wrote ABOUT A BOY, and MICHAEL CLAYTON), and it’s a fine sci-fi action film in most regards, but I can’t really say that it contains a story that was necessary to tell.

A lot of critics don’t feel that most sequels or prequels are necessary at all, but there can be worthy ones (the aforementioned THE EMPIRE STRIKES BACK immediately comes to mind as it’s considered by many people, myself included, to be the best in the series), so I still go into just about every new entry, episode, or chapter of just about every movie series with hope.

But with how overwhelmingly devoted to every pre-existing detail this film is, I bet in the future I'll think of this STAR WARS STORY as nothing more than EPISODE 3½: AN OLD HOPE.

* So if this explains the original Death Star’s weakness – i.e. why it had a flaw in which one torpedo in the small thermal exhaust port hole would cause the whole station to explode – what explains why the super-sized Death Star, Starkiller Base, in THE FORCE AWAKENS was built with the same flaw? (Han Solo: “Okay, how do we blow it up? There’s always a way to do that”).