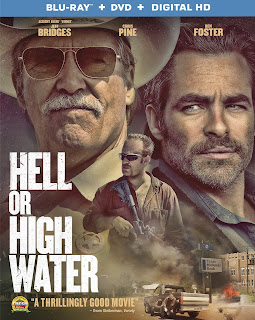 
I saw this movie during its theatrical run earlier this year, but never got around to blogging about it. I figured that it’s is a good time to catch up with it now because (1) it was recently released on Blu ray and DVD (2) it’s the #1 top grossing independent film of 2016 (3) it’s an excellent film that’s one of the year’s best.

With the theme of robbing-the-banks-because-they’re-robbing-us, Director David Mackenzie’s film posits Chris Pine and Ben Foster as Texas brothers who carry off a crime spree that involves them hitting a bunch of branches of the fictitious Texas Midlands Bank that’s set to foreclose on their recently deceased mother’s property by the end of the week.

The plan is the brainchild of Pine’s Toby Howard, a divorced father who can’t stand the idea that will soon own his family’s long-held land due to a reverse mortgage. Toby’s brother Tanner (Foster) was just released from prison, and is more than happy to go along with Toby’ Robin Hood-esque scheme simply because he’s a born outlaw.

On the boys’ trail is a Jeff Bridges as Texas Ranger Marcus Hamilton, who is, of course, on the verge of retirement with this being most likely his last case. Bridges’ gruff yet extremely laid back Hamilton is what you may call jokingly racist, as he constantly makes cracks about his partner, Alberto Parker (Gil Birmingham), being of Mexican Indian descent, but you can tell he’s just playfully riffing on stereotypes when he says “I’m lucky, I got a half-breed by my side to avenge me – if you can stay sober long enough, knowing how you injuns like the bottle.”

Hamilton deduces that the armed, masked men who are robbing Texas Midlands are trying to raise money for something, and he and his partner stake out a branch in a small town that seems likely to be hit next.

Except for a sequence involving Tanner and Toby taking their stolen loot to be laundered at an Indian casino in Oklahoma, we spend nearly equal time with the cops and the robbers.

We learn that Tanner had gone to jail for killing their abusive father, and that Toby has an angry ex-wife (Marin Ireland) and two sons that he’s determine to provide for. On the law enforcement side, Hamilton is a widower who’s not looking forward to his retirement, while Parker is a family man who dreams about moving to Galveston for a life spent fishing.

There are traces of the Coen brothers’ seminal modern western masterpiece NO COUNTRY FOR OLD MEN in this movie’s blood, but it’s a quieter, more restrained narrative without the Coens’ trademark dark humor edge.

Although there is a element of the Coens’ cynicism in such scenes as when the brothers’ helpful lawyer (Kevin Rankin) says “To see you boys pay those bastards back with their own money? If that’s not Texan I don’t know what is.”

As clichéd as these characters and their environs might sound, SICARIO screenwriter Taylor Sheridan unpretentiously fleshes out these people’s scenerios, giving every speaking part believability. Despite the tension in the robbery scenes, and the shoot-out in the hills climax, there’s a low-key tone that’s reflected in the convincingly lived-in performances.

The effectively eerie piano and violin score by Nick Cave and Warren Ellis, along with a well chosen collection of country songs by such artists as Townes van Zandt, Gillian Welch, Waylon Jennings, and Billy Joe Shaver scattered throughout the soundtrack, fit the film perfectly. Ray Wylie Hubbard’s over 20-year old dirge “Dust of the Chase” in particular sounds like it was written for the film with its line: “lost in the dust of the chase that my life brings.”

All of these delightful details come together to make a truly poetic film about poetic justice.

The on-point, socially conscious piece of modern western work that is HELL OR HIGH WATER definitely deserves some award season action – I’d love to see Bridges score another Oscar or at least a nomination – and its place on many critics’ year end “best of” lists (it’ll be on mine).

In a fairly lackluster year for film, Mackenzie’s exceptionally well made movie really stands out. Here’s hoping it gains traction as more folks see it and find it as satisfying as I did.

Special Features: The featurettes “Enemies Forever: The Characters of HELL OR HIGH WATER,” “Visualizing the Heart of America,” and “Damaged Heroes: The Performance of HELL OR HIGH WATER,”; a brief segment of the Red Carpet Premiere in Austin, Texas, and a 30-minute Filmmaker Q & A filmed at a Los Angeles screening hosted by Time Magazine’s Sam Lansky featuring Mackenzie, Bridges, Pine and Birmingham.