Casey Affleck Carefully Carries The Moving MANCHESTER BY THE SEA


Now playing at an art house or multiplex that's probably in your vicinity:


MANCHESTER BY THE SEA 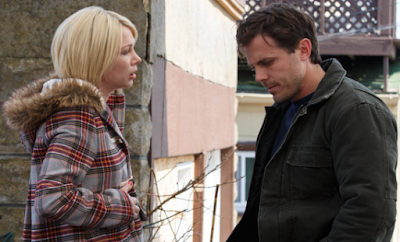 Honestly, Casey Affleck never really made much of an impression on me before. He’s done some solid work in a bunch of films, especially as the lead in his brother Ben’s GONE BABY GONE, but I never really thought of him as one of the better actors of his generation or anything.

His impressive performance in writer/director Kenneth Lonergan’s third film, MANCHESTER BY THE SEA, definitely changes that, and helps me to understand fully why there’s major Oscar buzz brewing.

Affleck plays Lee Chandler, a sullen janitor for an apartment complex in Quincy, Massachusetts, who we meet as he does his rounds. We get his daily routine – he takes shit from tenants, he gets shit about his attitude from his boss, and he ends the day getting shit-faced and starting fights at his neighborhood dive bar.

Then one day, Lee gets a call that his older brother Joe (Kyle Chandler, playing a guy with his same last name - deal with it) had a heart attack and is in the hospital, and he immediately jumps in his truck and travels to Manchester by the Sea, the small seaside town where Lee previously lived we learn from flashbacks.

Lee gets to the hospital to find that his brother has died, and that he needs to see about taking care of arrangements which includes looking after his 16-year old nephew Patrick (Lucas Hedges).

At a meeting with his brother’s lawyer (Josh Hamilton) about the will, Lee is stunned to find out that he’s been made Patrick’s legal guardian, and we are even more stunned to see Lee’s flashbacks to the tragic incident that killed his two daughters, and destroyed his marriage to his devastated wife, Randi (Michelle Williams).

This, the film’s central sequence, is heart wrenching to endure, but extremely necessary as afterwards the strong sense of what tortures Lee can be felt in every Affleck affectation. Lee’s reluctance, or fear, to be a father figure to Patrick makes for some awkward moments between them, but they are real feeling portrayals of tension between family members dealing with a difficult transition.

As Affleck’s Lee is the dominating protagonist, Williams’ Randi gets a lot less screen-time, but the actress does a lot with it. Randi, now remarried and pregnant, calls Lee to ask if it’s okay if she goes to Joe’s funeral. Lee says it’s fine, and they hug when they encounter each other at the ceremony. They also run into each other later, but it would be a Spoiler to touch on that any further.

Anyway, Lee and Patrick argue over where they’re going to live as Lee doesn’t like the idea of relocating from Quincy so the film last act deals with how these people come up with a plan to go forward.

At one point, Patrick wants to go live with his mother (Gretchen Mol), a recovering alcoholic gone devout Christian who’s now living in the suburbs with new hubby Rodney (Matthew Broderick), but after an uncomfortable dinner scene, that doesn’t seem to be an option.

The unpretentious, and moving MANCHESTER BY THE SEA takes its time getting to its moments of insight, but it’s never boring along the way. It’s a well paced, lovingly detailed portrait of people trying to move forward even when they have no clue as to how.

Affleck’s carefully measured performance is indeed Oscar worthy. I may be realizing now that what he does may be so subtle that I’ve just never seen it before.

Williams also inhabits her part with conviction and the appropriate pathos. It may be a glorified sideline role, but I wouldn’t be surprised if she scored a Supporting Actress nomination as other brief but potent performances have garnered the same (see Beatrice Straight in NETWORK, and Viola Davis in DOUBT).

In addition, Hedges succeeds in being a not too self conscious representation of a modern teenager - which is no mean feat.

In general, the excellent work that Lonergan, the cast, cinematographer Jody Lee Lipes, and composer Lesley Barber have all done here deserves all the accolades and Academy Awards it will likely get.

Now, I must note that there’s controversy surrounding a sexual harassment case against Affleck over alleged behavior on the set of I’M NOT HERE, his odd 2010 mockumentary with Joaquin Phoenix, that threatens to derail his Oscar chances.

Since it’s been settled, I doubt this film will have the same sad fate as BIRTH OF A NATION, because Affleck’s offences are less extreme than Nate Parker’s, and because the idea that Affleck’s character here is a damaged soul plodding forward after a horrible mistake is what makes this the intensely relatable, realistic experience that it is.