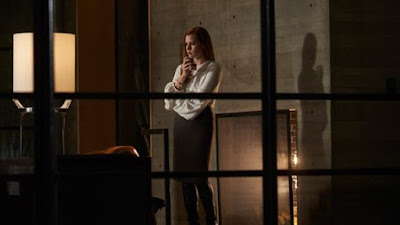 The opening credits sequence for this film may be considered one of the most challenging bits of cinema this year. It contains a montage of a burlesque line of full frontal nude plus-size models, dancing amid firecrackers and American flags.

I don’t want to body shame anybody, but it was difficult to watch despite how uninhibited and happy these women appeared. I found myself focusing on the names in the credits as these unabashedly naked ladies were grinding behind them onscreen.

Turns out that this bold display of flesh is part of a modern art installation at a Los Angeles gallery owned and run by unhappy socialite Susan Morrow (Amy Adams), who later calls the exhibit “junk.”

Susan is living a posh existence with a handsome husband (Armie Hammer) in a lavish steel and glass house, but she’s unhappy because her life feels empty. Also her husband cheats on her so there’s that.

Susan receives in the mail a manuscript of a novel written by her first husband, Edward Sheffield (Jake Gyllenhaal) that’s dedicated to her and named “Nocturnal Animals” – something he used to call her because she rarely sleeps.

When Susan starts reading the manuscript she imagines Gyllenhaal’s Edward as the protagonist, Tony Hastings, but Isla Fisher stands in for Adams, and Ellie Bamber plays their teenage daughter. This is the film inside the film of sorts as we are taken to a West Texas desert in the middle of the night where Tony and his family get run off the road by three rowdy, scary rednecks (Aaron Taylor-Johnson, Karl Glusman, and Robert Aramayo).

Led by Taylor-Johnson, the trio of troublemakers terrorize Tony and kidnap his screaming wife and daughter leaving Tony stranded in the desert. By morning, Tony makes his way to the nearest town and goes to the police, but they are too late to save his loved ones as they find them raped, and murdered lying together, arranged like an art exhibit, on a red velvet sofa in the broken down remains of a building out in the middle of nowhere.

This is shown in sections as the film cuts back to Susan in the real world when she stops reading after a particularly harrowing passage. The dark content of her ex-husband’s book makes her have flashbacks to when they first met and fell in live, with Susan re-living how they fell apart because she found him too sensitive and weak. Susan breaks Edward’s heart for good when she aborts their baby, and runs off with successful heart surgeon Arnold (Hammer) resulting in her current unsatisfied existence.

Obviously, the guy’s book is making a symbolic statement about their relationship, but it may be hard to decipher beyond its themes about murder and revenge.

Susan reads on and we see Tony, with the help of deputy/detective Bobby Andes (the always excellent Michael Shannon in his tenth movie this year – no joke), try to avenge his wife and daughter’s deaths by tracking down the psychopath perpetrators (two of them at least, as one was killed) and taking them to the shack where they committed the crime. Taylor-Johnson is so effectively sleazy in this part that I was hoping that they'd just hurry up and off him.

Despite some of its perplexing motivations, Ford’s follow-up to his acclaimed debut, A SINGLE MAN, is stylish and thoroughly compelling exercise, or triplet of exercises. It’s based on Austin Wright’s 1993 novel “Tony and Susan,” and from descriptions I’ve read it seems to be very faithful adaptation. Not sure if the overweight nude dancing ladies were in the book though.

I may be to prudish to appreciate that aforementioned opening, but the film's well crafted and exquisitely shot (by ace cinematographer Seamus McGarvey) textures took me into the worlds of Adams’ lush life, her imagined scenes from the novel, and her remembrances of her younger self’s choices. Adams does a great job subtly fleshing out the role of Susan, but it’s Gyllenhaal’s performance that really got under my skin. 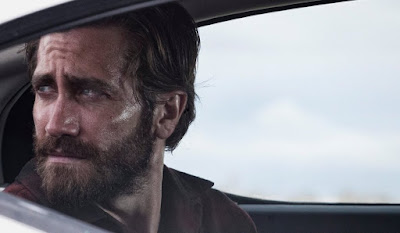 Gyllenhaal’s exasperated everyman Tony whose weakness goes on trial is one of his finest portrayals to date. His character is a surrogate for anyone who’s ever wished that they could go back to a crucial time where they faltered and man up.

What Edward is trying to get across to his ex-wife Susan in the book “Nocturnal Animals” is something to be debated, but damn if it isn’t provocative enough to keep moviegoers processing it for weeks. I speak from experience as I saw it a month ago and I’m still working on what it means.

The ambiguous ending left me hanging a bit too. So I’m betting that the beginning and the end of NOCTURNAL ANIMALS will turn off a lot of folks. But with hope, maybe they’ll get something seemingly profound from the middle. I know I did. I think.