At Best, The Crude, Cute KEANU Is A Mild Chucklefest 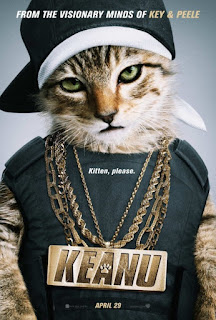 If you’ve been to the multiplex lately you may have seen a poster for a movie named KEANU featuring a cat wearing a baseball cap sideways, a do-rag, and chains over what looks like a bullet-proof vest.

But comedy duo Keegan-Michael Key and Jordan Peele’s first feature film after wrapping up their Comedy Central show Key & Peele after five seasons isn’t really about a hip hop gangsta cat – no, that’s just a selling point. The most dolled up that the cat gets in it is in do-rag and chains.

It’s really about two nerdy friends, cousins actually who live in the suburbs, who have to affect tough thug-like personas in order to infiltrate the Los Angeles criminal underworld to get back their kidnapped kitten. 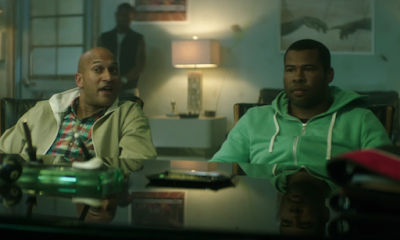 The kitten named Keanu - reportedly they were working on the screenplay around the time that JOHN WICK came out - was found by Rell (Peele) on his doorstep right after he was dumped by his girlfriend, so he immediately falls in love with the brown tabby.

A few weeks later, when Rell and his cousin Clarence (Key) are out at the movies, Rell’s apartment gets broken into and they come home to find that Keanu is missing. Rell freaks out, calls the police, then figures that his pot dealer Hulka (Will Forte in cornrows) who lives next door might know something about the break-in.

Hulka points Rell and Clarence in the direction of “the 17th St. “Blips,” a supergang comprised of Bloods and Crips, that use a topless bar called Hot Party Vixens as their headquarters. That’s where they have to do some heavy code switching to get to the Blips’ leader, Cheddar (Method Man), who has Keanu in his possession and has named him New Jack.

Cheddar mistakes Rell and Clarence for The Allentown Brothers, a pair of psychopathic gunmen (also played by Key and Peele), and makes a deal with them that if they make a delivery of his new drug called “Holy Shit” they can have the cat.

Rell and Clarence, or TekTonic and Sharktank as they’ve started calling themselves, meet up with Cheddar’s crew: Hi-C (Tiffany Haddish), Bud (Jason Mitchell, Trunk (Darrel Britt-Gibson), and Stitches (Jamar Malachi Neighbors), and proceed to fake their way through a series of shoot-outs set-pieces which get a bit tiresome.

It feels weird to say that an R-rated comic action movie that drops the f-bomb and n-word seemingly every minute is a light comedy, but the shoe fits as I think I mainly giggled mildly under my breath throughout. Peele and co-screenwriter Alex Rubens are obviously going for a PINEAPPLE EXPESS-esque takedown of action movie tropes, in which our heroes actually get bullet injuries and many people get killed, but these types of '80s-style scenarios that always seem to climax with a mansion shoot-out have simply been satirized to death.

Key and Peele’s characters would be funnier if they were fleshed out more - I can’t even remember what jobs they were supposed to have – and a sideline subplot about Clarence’s wife (Gabrielle Union), who’s away on a weekend trip with their daughter and a friend (Rob Huebel) and his daughter, saying on the phone to Clarence that Huebel has been inappropriate seems like it’s a small bit from a sequence that had been largely cut (I bet that there’s a deleted scene from it on the upcoming Blu ray/DVD).

However, I did adore the setup, including the opening church massacre scene, that’s shot a la John Woo in stylish slow motion, as much as I adored Keanu the kitten (or the seven kittens that played Keanu), and was amused by random moments like Key smoking some “Holy Shit” and hallucinating that he’s in a George Michael video (there’s a running gag that Key is a big fan).

I kept waiting for big laughs that never came, so the best I can say is that the cute, crude KEANU is a mild chucklefest. Even if you’re a hardcore fan of Key and Peele (or cats), you may want to consider a matinee.