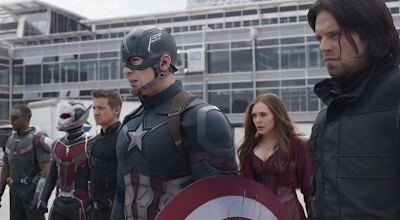 Now here’s the third CAPTAIN AMERICA movie, which is so packed with Marvel superheroes that it could easily be mistaken for the third AVENGERS movie.

For Chris Evans, once again donning the red, white, and blue uniform and shield as the title character, is joined by Robert Downey Jr. reprising his iconic role as Iron Man/Tony Stark for the seventh time, Scarlett Johansson for her fifth go around as Natasha Romanoff / Black Widow, Anthony Mackie for the fourth time as Sam Wilson/Falcon, Don Cheadle, also four timing it, as James “Rhodey” Rhodes /War Machine; Jeremy Renner as Clint Barton/Hawkeye (another four timer), Elizabeth Olsen for her second appearance as Wanda Maximoff /Scarlet Witch, Paul Bettany as Vision (likewise), and Paul Rudd, also back for seconds, as Scott Lang/Ant-Man.

And that’s only half the cast because Sebastian Stan is back again as Bucky Barnes aka Winter Soldier from the CAPTAIN AMERICA sequel of the same name, Chadwick Boseman is on hand to introduce the character of T’Challa /Black Panther to the MCU, Daniel Brühl does a slimy turn as Slovakian terrorist Helmut Zemo, Frank Grillo (also from the CAPTAIN AMERICA sequel) puts in some more tough guy time as Brock Rumlow/Crossbones, William Hurt is back from the THE INCREDIBLE HULK (though the Hulk isn’t) as General Thaddeus “Thunderbolt” Ross, and Captain America’s returning love interest Sharon Carter /Agent 13 again played by Emily VanCamp.

Whew! I knew I’d spend half the review just listing who’s in this movie, and I haven’t even gotten to what’s probably the most hyped factor: the introduction of the brand new Spider-Man to the MCU, now played by Tom Holland in a warm up for SPIDER-MAN: HOMECOMING, due for summer 2017.

CIVIL WAR involves the Avengers being divided over signing the Sokovia Accords, a 117-country treaty that would give the United Nations jurisdiction over the superhero team because of the massive death and destruction that went down in AGE OF ULTRON. Iron Man is for signing the agreement, feeling that the Avengers should be kept in check, but Captain America disagrees, feeling that the regulations will run them the risk of being used as weapons by corrupt forces in the government.

Captain America’s discord with the Accords has to do with his protection of the Winter Soldier from Iron Man, as the brainwashed Bucky Barnes was responsible for the automobile accident that killed Stark’s parents. 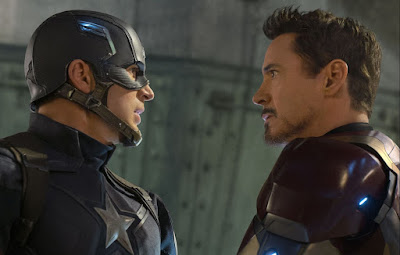 While the film is obviously all about a big showdown between Team Captain America, who has Falcon, Winter Soldier, Hawkeye, Scarlet Witch, and Ant-Man on his side; and Team Iron Man, who has Vision, Black Panther, WarMachine, and Spider-Man on his side, there is a framework of dramatic scenes interwoven with action set pieces leading up to it that make the film a lot more than one big blow-out battle.

Christopher Markus and Stephen McFeely, who wrote the previous Captain America films, expertly weave together all these characters and story elements into a ensemble epic that’s one of the strongest, richest, and rewarding of the Marvel movies. There’s not a wasted moment or misstep in the film breezy 146 minute running time.

The Russo brothers have topped their previous CAPTAIN AMERICA entries and Joss Whedon’s last AVENGERS film by maximizing on the human approach to these characters. We’re not watching unrelatable dark dull demigods fighting it out like in the disastrous BATMAN Vs. SUPERMAN, we’re engaged with flawed, funny friends with opposing principles putting their powers on the line. The powers that be at DC really ought to be taking notes.

CIVIL WAR’s climax, the aforementioned Avengers on Avengers battle at Leipzig/Halle Airport in Germany doesn’t disappoint. It’s a rousingly exciting and wholeheartedly hilarious sequence of spectacle that’s as packed with thrills as it is one-liners. Every Avenger gets a chance to shine, but Rudd’s Ant-Man, who enlarges himself to be a towering giant at a crucial moment, steals the sequence – or at least, scores the most laughs.

Another Avenger who steals their screen-time is Johansson with her impeccably choreographed hand-to-hand fight scenes being the best I’ve seen since THE RAID 2. As much as I enjoyed Holland’s fresh, frisky take on Spider-Man, Johansson’s moments made more of an impression on me. Where’s her stand-alone movie?

But everybody here is at the top of their game. Evans is the best he's ever been as Cap, Downey Jr. acts again like he was born to play Iron Man/Stark, and there's not a dud to be found in the vast cast.

CAPTAIN AMERICA: CIVIL WAR is a stupendous success of a super-sized superhero mash-up; a well-oiled machine of a crowd-pleasing blockbuster that fan boys won’t be able to get enough of. As somebody who’s been more satisfied than disappointed by the offerings of the MCU, consider me among them.

Oh, and as always - stay for the post credits stingers.