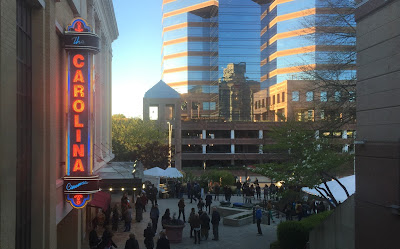 Despite the sunniness, it felt like the last gasp of winter on Saturday and Sunday with very chilly winds flowing through the buildings of downtown Durham. There was even a freeze warning on Saturday night. But why am I talking about the weather when I was warm and cozy inside the Carolina Theatre on both days watching what I could of the Full Frame Documentary Film Festival roster? I'm not sure so let's just get to the docs. 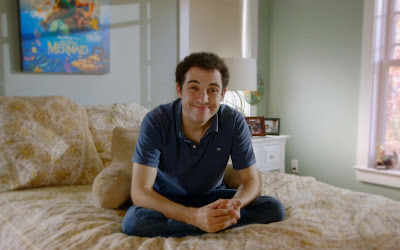 Owen was diagnosed at age 3 with regressive autism and started speaking only in gibberish but over the years of watching every animated Disney film repeatedly, he began to communicate with his family through the dialogue from those classic cartoons. Williams, who won an Oscar for Best Documentary Short Subject for his film MUSIC BY PRUDENCE, filmed Owen as he graduated school and moved out of his parents’ house to live on his own for the first time. Owen’s father, Ron, mother Cornelia, and brother Walt appear to provide their insights, while animation by Mac Guff brings to life both the families’ memories, and Owen’s own original story “The Land of the Lost Sidekicks” (there's also lots of clips from the over 40 classic Disney films that Owen has memorized).

Based on father Suskind’s 2014 book “Life, Animated: A Story of Sidekicks, Heroes, and Autism,” Williams’ film is a heartwarming, inspiring work that I could tell greatly touched the audience at Fletcher Hall on Saturday afternoon. That was strongly evident when Owen took the stage, with the filmmakers and members of his family, for a Q & A after the screening. Owen delighted everyone with his impressions of Disney characters, and his short to the point answers. Anybody who’s cynical about what effect Disney has on the world should see this film – it’ll make them change their tune for sure. 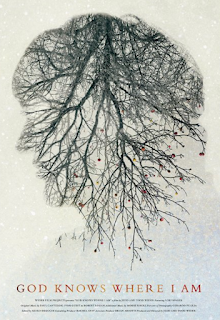 Following that was Jedd and Todd Wider’s GOD KNOWS WHERE I AM, about the troubling life of a mysterious woman whose body was found in an abandoned New Hampshire farmhouse. Next to her was a diary in which she documented her starvation and loss of sanity. The woman was identified as Linda Bishop, who had been in and out of psychiatric hospitals and served time in jail. Bishop's sister, Joan; and daughter, Caitlin Murtagh, alongside testimony from various therapists and social workers, appear to help tell her story, but its the voice-over readings from Linda's diary by actress Lori Singer (probably best known as the female lead of the 1984 hit FOOTLOOSE) that are most affecting.

GOD KNOWS WHERE I AM is a chilling, dark doc debut from the Wider brothers, who have learned well from producing several of ace documentarian Alex Gibney's project. I know that Linda's sad, haunting story will stay with me for some time. 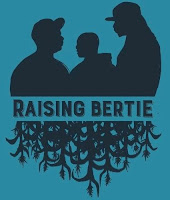 Another promising doc debut I saw on Saturday was Margaret Byrne's RAISING BERTIE, which follows three young African American men - Reginald “Junior” Askew, David “Bud” Perry, and Davonte “Dada” - over the course of five years as they grow into adulthood in the rural county of Bertie, here in North Carolina. The trio attended The Hive, a school for at-risk students, together before striking out on their own, but when the alternative school closes , they have to return to the system that originally failed them.

Byrne's camera captures some intimate moments with these men as they struggle to find their place in adulthood in this unpretentiously framed narrative. There's a fly-on-the-wall feel to the proceedings as we witness such events as Davonte attending his senior prom, and Reginald visiting his biological father in jail. As RAISING BERTIE concentrates on the coming-of-age arc of its subjects, it raises some vital questions about what options and opportunities exist for young people in rural America. It doesn't have any answers to these questions but, through these men, it stirringly taps into the power of individual perserverance.

Saturday night, I took in Ido Haar's PRESENTING PRINCESS SHAW, which was part of this year's Center Frame series. Having been previously clueless to its content, I was very taken by the tale of how its star, Princess Shaw (real name: Samantha Montgomery), became a viral sensation when a Israeli musician, Kutiman (real name: Ophir Kutiel) used her vocals in a mix with other “found” musical elements to make this striking song:

The doc follows Princess Shaw, who by day works as a nurse in New Orleans, as she finds out (and freaks out) about her internet stardom and travels to Tel Aviv to meet and collaborate further with Kutiman. Originally, Haar's project was supposed to be about the culture of YouTubers in general, but came to center around the infectious, bouyant personality and sympathetic backstory of Princess Shaw. It was a wonderful choice, as the film is quite possibly not just the most joyous doc of this year's fest, but the most joyous doc I've seen at Full Frame ever.

Princess Shaw herself appeared during the end credits to rapturous applause, and went on to give us a live performance of her signature song:

In the Q & A, our lady of honor revealed that she is soon to be working on a proper album for release later this year, stressed that she's not a star yet as she's still working her nurse job, and repeatedly shared what was apparently her new favorite expression of excitement: “rock sausages!” Many complain of cyber disconnection in our modern times, but strong, passionate, and (again) joyous stories like this show that the digital age can bring people together. Rock sausages indeed. 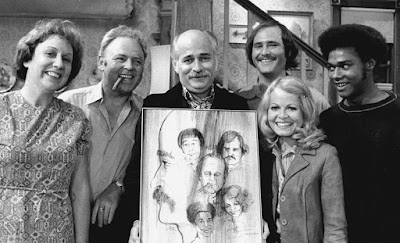 This biodoc of one of the most successful independent TV producers of time (at one point he had five different televsion shows in the top ten in the Nielsen ratings) ought to be mandatory viewing for Millienials so that they can get some understanding of how influential and game changing such sitcoms as All in the Family, The Jeffersons, Good Times, and Maude were in the '70s.

The 93-year old Lear appears in insightful interview segments (which somewhat resemble the ones in BY SIDNEY LUMET but that's a doc given), alongside and overlapping with clips from his classic shows, while family members, friends and collaborators such as George Clooney, John Amos, Louise Lasser, Rob Reiner, and son Ben Lear appear to sing his praises. As a fan of the man who grew up on his shows (I really felt Jon Stewart when he said “you raised me!” to Lear backstage before a guest appearance on The Daily Show), I didn't learn much new, but still highly enjoyed the ride through Lear's rich career. But I had forgotten some of the juicy details about his fighting the Moral Majority in the '80s so the refresher there was very appreciative.

Lear's legacy is so considerable that, unless one didn't have access to footage from his TV library, it would be hard to make a bad doc about the man, but Ewing and Grady (makers of such fine docs as THE BOYS OF BARAKA, JESUS CAMP, and DETROPIA) have assembled an affectionate tribute that made me tear up throughout. Now I want to watch the entire run of All in the Family again.

Okay! So that's Full Frame 2016. Thanks for reading and stay tuned to this space for more Film Babble Blog Fun.