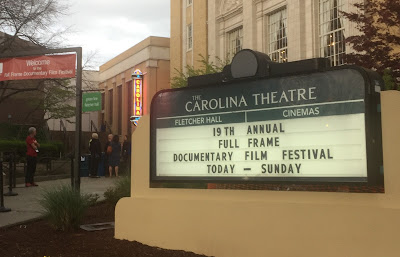 It's that time of year again - time to head to downtown Durham, N.C. for a four-day slew of new docs to view as the 19th Annual Full Frame Documentary Film Festival is underway at the Carolina Theatre and the Marriott Convention Center.

The first film I attended was BY SYDNEY LUMET, directed by Full Frame founder Nancy Buirski (THE LOVING STORY). 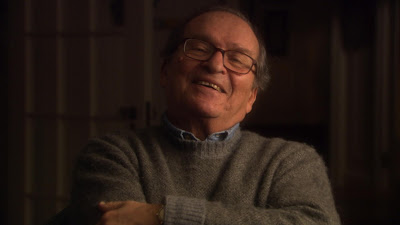 The film is a portrait of the late filmmaker consisting of interview segments from an 18-hour session filmed in 2008 by documentarian Daniel Anker (who passed in 2011), which are edited together with footage from many of Lumet's 44 films. In close-ups so tight that we get intimate with his nose hairs, Lumet points out the thematic connections between such notable works as 12 ANGRY MEN, LONG DAY'S JOURNEY INTO NIGHT, SERPICO, DOG DAY AFTERNOON, NETWORK, THE VERDICT and many others while well chosen clips enhance his recollections.

It's an insightful and at times emotional look at an impressive body of work. Lumet's method has been considered workmanlike by many critics, but Buirski, through the man's own words, makes the case for the vitality of his craft that shines through. Buirski's film is so successful in this thesis that there was an audible gasp by the audience when text told us at the end that Lumet never won a Best Directing Oscar. But he did receive an Honorary Academy Award in 2005 so there's that at least. BY SIDNEY LUMET is a sheer delight of a biodoc that makes me want to see every Lumet movie (I've only seen a third of his output so far). 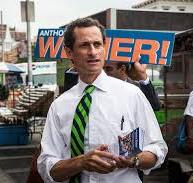 The Opening Night Film for the festival was a real doozy: Josh Kriegman and Elyse Steinberg's WEINER, about former Congressman Anthony Weiner, who you probably know from the dick picks that derailed his candidacy for Mayor of New York. The film begins with a quote from Marshall McLuhan: “The name of a man is a numbing blow from which he never recovers,” and the laughs keep coming after that so much so that WEINER is funnier than just about any recent comedy.

For their feature length doc debut, Kriegman and Steinberg follow Weiner around on his 2013 campaign as the politician tries to rise above the scandal and put forth his ideas, but stern shots of his suffering wife, Huma Abedin (currently vice chairwoman of Hillary Clinton's 2016 campaign for President) tell us that this isn't so easily swept under the rug. Especially when a second scandal, involving explicit pics sent to a young woman, hits the candidate hard. Kriegman and Steinberg know that this is a story best enchanced by the satirical news commentary of Jon Stewart's The Daily Show, Stephen Colbert's The Colbert Report, and various late night monologue jokes than straight news coverage so there's plenty of hilarious punctualizing from those sources throughout.

The guy brought it on himself obviously, but I did feel some sympathy for him in the film's quieter moments. Particularly one towards the end when at an sad, awkward pause at Weiner's posh apartment, Kriegman actually asks “Why have you let me film this?” Weiner just stares blankly back at the camera before it cuts. WEINER, which could just as well be subtitled “The Adventures of Carlos Danger,” has as much to say about ambition as it does delusion. It's up to the viewer as to which one wins out. 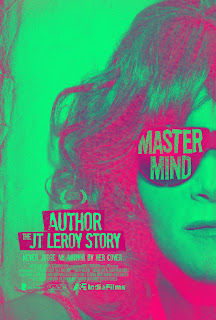 My final doc for the first day of Full Frame, Jeff Feuerzeig's AUTHOR: THE JT LEROY STORY, may have been the most fascinating of the films I've seen so far, as it's about a subject that I knew the least about. It concerns the litery persona of Jeremiah “Terminator” LeRoy, which was created by writer Laura Albert. LeRoy became a sensation and a media darling for the celebrated novels “Sarah,” and “Harold’s End,” and the short-story collection “The Heart is Deceitful Above All,” in the '90s, but few knew at the time that Albert's sister-in-law Savannah Knoop played the part for public appearances.

Celebrities such as Courtney Love, actor Michael Pitt, and The Smashing Pumpkins' Billy Corgan get caught up in the androgynous LeRoy's orbit, as does filmmaker Gus Van Sant who uses some of his/her idea's in his 2003 film ELEPHANT, which credits LeRoy as Associate Producer, before the author is exposed by the New York Times in 2006.

Feuerzeig, who made one of my rock doc favorites THE DEVIL AND DANIEL JOHNSTON, tells Albert/LeRoy's tale though a well blended mix of footage, photos, and, most effectively, audio from scores of Albert's telephone answering machine tapes (a call from Tom Waits is priceless). Albert provides at times poetic interview commentary about how it felt to watch her creation from the sidelines, and by the end we have a full, and thoroughly entertaining picture of how this absurd series of situations revolving around a fabricated identity went down. AUTHOR is for certain a biodoc with a real difference.

Okay! So that wraps up day 1 of Full Frame 2016. Check back tomorrow for coverage of Day Two, and for live tweeting of the event follow @filmbabble.