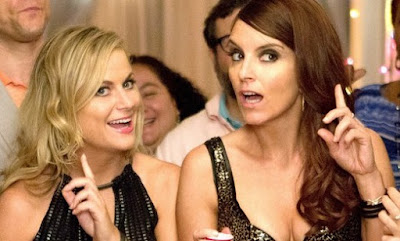 So, aided by PITCH PERFECT director Jason Moore helming a screenplay by their fellow SNL writer alum Paula Pell, Fey, and Poehler do just that, and it results in their silliest, sloppiest, and, sadly, least substantial project of either of their careers.

That’s not to say it doesn’t have a lot of funny moments though.

Fey, as an irresponsible, unemployable mother very much the opposite of her signature role as workaholic neurotic Liz Lemon on the former NBC sitcom 30 Rock; and Poehler, as the control freak nurse who shares little in common with her signature role as Lesley Knope on the former NBC sitcom Parks and Recreation, slip easily into their roles here as siblings Kate and Maura.

When the two sisters learn that their parents (James Brolin and Diane Wiest) are selling their beloved childhood home in Orlando, Florida, they decide to have one last blow-out party there and, wouldn’t you know it, outrageous hi-jinks ensue.

On the sisters’ guest list is The Mindy Project’s Ike Barinholtz as a neighbor that Poehler’s Maura is crushing on; John Leguizamo as a sketchy alcoholic druggie who’s crushing on Kate; SNL pals (Kate McKinnon, Rachel Dratch, and Bobby Moynihan), Samantha Bee as a married mom looking to get her freak on, and several other recognizable funny faces.

Another SNL alum of Fey and Poehler’s, Maya Rudolph plays would could be considered the movie’s villain, the snooty Brinda, who tries to crash the party but gets thrown out so she continuously attempts to shut the shindig down. Rudolph’s part is probably the most contrived and least amusing element on display, but she still made me laugh (or at least snicker) particularly when seen dancing outside the window.

As a stoic drug dealer, John Cena, in his third comic film appearance of the year (TRAINWRECK and DADDY’S HOME are the other two) also warrants some laughs (stay through the end credits for his best moments).

Just about everything you’d expect happens – massive property damage, somebody accidentally gets fucked up and wrecks havoc (Bobby Moynihan mistakes cocaine for Splenda when doing a Scarface impression), farcical sex scenes, and, of course, epiphanies about the sisters’ unhappy stations in life.

SISTERS is a throwaway comedy that may only be good for a matinee or a half-hearted rental months later, but because Fey and Poehler are two of the funniest people on the planet, it contains a high volume of jokes that land, even if you may not remember them later.

This weekend, it certainly serves as wacky counter programming to the new STAR WARS (as in if you can’t get into that, maybe consider this), but I bet Fey and Poehler’s stint co-hosting SNL the day after the film’s opening (with music guest Bruce Springsteen and the E Street Band!) will be a much funnier must see.

I heard that this movie was very funny