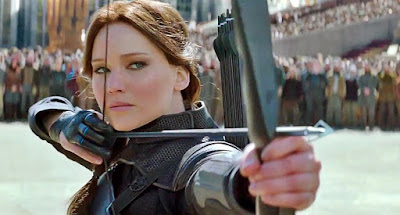 So many movies, so little time.

With a few exceptions, I’ve found it to be a fine fall for film. The movies that have stood out to me include THE MARTIAN, BRIDGE OF SPIES, STEVE JOBS, SICARIO, ROOM, SPOTLIGHT, and CREED (click on the titles to read my reviews), but there are many more that I have seen over the last few months but haven’t blogged about yet. So I thought I’d take a look back, and clean out my notebook in the process, especially because a bunch more movies are coming fast. 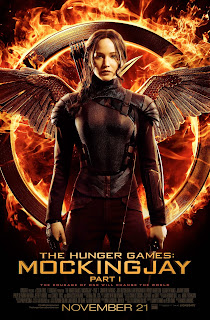 I’ll start with what’s currently #1 at the box office, Francis Lawrence’s THE HUNGER GAMES: MOCKINGJAY - PART 2, the fourth and final film in the popular franchise. I enjoyed the first two entries in the series, but haven’t been into either half of MOCKINGJAY. PART 2 is a washed out slog through bleak terrain with very little action (certainly not of the fiery kind that the poster implies) or emotional connection. Jennifer Lawrence and the rest of the cast make the most out of the murk, which has to do with our arrow-shooting heroine, Katniss Everdeen, and crew taking down the evil Capitol or some such, but I was so ready for it to end way before it did. The most notable, and maybe the most depressing, part is that it contains the last film work of Philip Seymour Hoffman, whose loss can really be felt in a concluding scene in which a letter from his character to Katniss has to stand in for him. 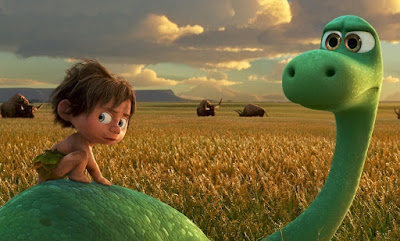 Next up, a few weeks back I had the choice between an advance screening of CREED and the new Pixar movie, Peter Sohn’s THE GOOD DINOSAUR. Because of their track record, I went with Pixar. I chose…poorly. The obvious upside is that the film, set in a world in which dinosaurs never went extinct, is gorgeously animated with stunning photo-realistic landscapes and vibrant colors that really pop in 3D. The downside is that, after half a decade of development hell with changes in director and voice cast, the resulting film’s story, about Arlo the Apatosaurus’ adventure accompanied by a feral caveboy, is probably Pixar’s least substantial. After the screening, I joked with friend, and fellow blogger, William Fonvielle of Filmvielle, that it needed a MacGuffin, but it probably really needed a few more re-writes. 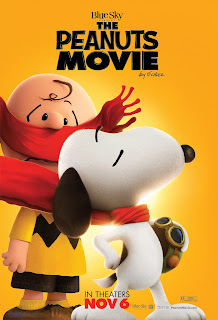 A much better animated feature this season, is Steve Martino’s THE PEANUTS MOVIE, the first “Peanuts” film in 35 years (the last one, BON VOYAGE, CHARLIE BROWN (AND DON’T COME BACK!), I saw as a kid at the theater – I’m old). It’s apparent that the filmmakers, including Peanuts creator Charles M. Schultz’s son Craig, and grandson Bryan, who co-wrote and co-produced, took a lot of care in paying proper tribute to the style, tone, and sentiment of the original strip (and the TV specials and movies), right down to every character’s expression.

The premise, involving Charlie Brown trying to impress the ever elusive Little Red-Haired Girl, is full of humorous and heartfelt moments, and Snoopy’s subplot, involving his imaginary WWI air battles with the Red Baron, is pretty entertaining too. The animation may be a little too fancy - such intricately applied shadows and lighting on these kids’ faces seem a bit much at times – and I could’ve done without the pop song concessions, but this enjoyable update acutely captures Schultz’s ‘loser who wins’ spirit. 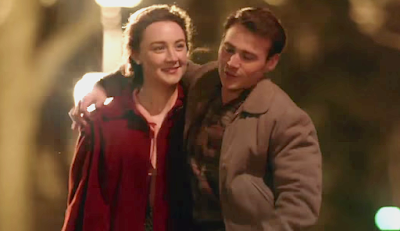 On the indie front, there’s John Crowley’s BROOKLYN which has been getting well deserved buzz and is currently #9 at the box office. It’s a very pretty period piece, based on Colm Tóibín’s acclaimed 2009 novel, that boasts a strong performance by Saoirse Ronan as Eilis, a shy Irish immigrant struggling to adapt to her new life in 1950s Brooklyn. In yet another likable turn, Jim Broadbent plays a kindly priest who helps Eilis get a job working a cosmetics counter in a department store, where she’s watched over by Jessica Paré (Mad Men) as the head clerk. Eilis finds love in the form of Emory Cohen as Tony, a charming Italian-American who scopes her out at a dance because he “likes Irish Girls.”

Eillis’ learns that her sister Rose (Fiona Glascott) back home in Ireland has died and she decides to return home, but before she goes, she and Tony get secretly married at City Hall. Once back home she finds herself with a new suitor (Domhnall Gleeson) while letters from Tony stack up unopened. So our heroine, who grows more and more confident as the film progresses, has to make a choice between the two vastly different lifes.

The screenplay, adapted by Nick Hornby (HIGH FIDELITY, AN EDUCATION), is tenderly written, giving Eilis’ story a lot of resonance, and it’s a handsome looking film, warmly shot by cinematographer Yves Bélanger (WILD, DALLAS BUYER’S CLUB). Although there’s another ‘50s-set drama (hint: it stars Cate Blanchett) soon to release that’s far superior, BROOKLYN is a beautifully drawn drama that is sure to get plenty of awards season action.