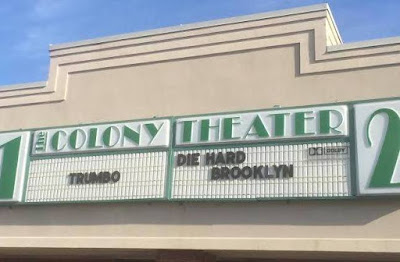 After tomorrow night’s showings of BROOKLYN (at 7:15 and 9:20) and TRUMBO (7 and 9:30), the Colony Theater in Raleigh will be ceasing operations. Tonight's showing of the 1988 action classic DIE HARD, which I wrote about in the N & O last Friday, will be the last Cool Classics screening at the theater (the series moves to the Rialto in January).

A couple of months back after it was announced that the theater was closing, I posted asking local folks to send in their stories about their experiences with the venue, but I only posted a few of them for a few reasons.

First, there were pesky rumors that the rent might be re-negotiated or that new owners would swoop in and continue its long run as an indie theater. I didn’t really believe they were true, but I still had some small hope that the Colony could be saved.

Second, I didn’t get that many stories. My friend, Anthony Rhodes, who worked there several years ago shared several entertaining ones, and there was a funny anecdote that Brian Hill shared about going to see PULP FICTION there with a girl who was tripping on mushrooms, but mostly I got folks emailing that they were sorry that the theater was closing, and that they went to many movies there.

So, in one last ditch effort to try to job folks’ memories I posted this on Facebook today:

The Last Days of The Colony Theater Thread: I was hoping I could get folks to share their favorite movie experience at the Colony as they are closing tomorrow. I’ll start: Three or four years ago, I attended the Colony’s Cool Classics screening of Ridley Scott’s sci-fi horror classic ALIEN.

I sat up close and got more engrossed in the film than any other time I had seen it. Of course, this was largely because I had never seen it on the big screen before, but it was different this time because this time I felt like I was watching the movie back in 1979 when it first came out.

That’s right, I seriously felt transported into not just the world of the movie but the world of the theater that had probably shown the movie back then. Those who are well acquainted with the décor of the shag carpeting on the walls can probably imagine the feeling somewhat as the theater never lost its ‘70s looks. This vivid memory of that ALIEN screening is one I’ll never forget - when the Colony became a time machine.

Anybody else got a favorite movie experience at the Colony story?

Here are some responses:

Matt Pennachi (Former Cinema Overdrive Series curator): I'm not sure how to craft it into a story that is actually interesting to read, but having a chance to run SLAP SHOT on 35mm was a real thrill to me. In particular, having the opportunity to run the National Film Board of Canada cartoon of "The Sweater" (which was a childhood favorite of mine) before the film was awesome.....particularly when I had to manually chance the masking from scope to flat as we transitioned from the cartoon to the feature.

Jennifer Love (Rialto Theater Manager): When Ambassador first bought the Colony, I remember being there when the new floor carpeting was being installed and helping paint the restrooms. Someone had decided to be creative on the stalls and go for that speckled look. We had old toothbrushes and dipped them in white paint and splattered spots onto the stall walls. That's how we did it and why there are so many different sizes of spots. I think I had more white paint splatters on me than the stalls!

I also worked matinees back when Colony ran them everyday. Food lion was being constructed next door at that time. Clif and I worked the unexpected hit, LIFE IS BEAUTIFUL and a sold out show around the holidays (can't remember which) of SHAKESPEARE IN LOVE. just the 2 of us! I still don't know how we did that. My favorite memories are of the midnight late shows. They played in house one: THE ABYSS, HEAVY METAL, THE SHINING and so many more. I know everyone will continue to love the Colony and all the memories made there. Good times.

Daniel Matti (Schoolkids Records Manager): I saw 13 ASSASSINS twice there. The only Takashi Miike film I've seen in theaters. I will miss the Colony.

Joel Frady (Fellow Film Critic): REQUIEM FOR A DREAM in 2000 - there must have been 50 or so people in the right theater, and when the credits rolled not a single person moved. Then, when the lights came up everyone slowly exited - but nobody said a word. We were almost back to NC State when I finally broke the silence with “Who wants a fucking Dairy Queen Blizzard?”

Joe Corey (Cinema Overdrive host): Fond memory of going over for a midnight screening of FASTER PUSSYCAT KILL! KILL! for the projectionist inspection. Also the joy of attending my first Cinema Overdrive and feeling at home. It was good to attend a program where I had utter trust in whatever Adam (Hulin) and Matt (Pennachi) programmed. Was so grateful for the months that I hosted the series while Adam was away.