F*** The Haters, Tarantino’s THE HATEFUL EIGHT Is F***-in’ Great 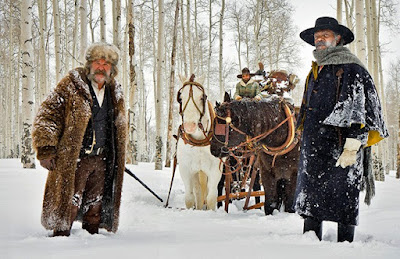 Before “The Eighth Film by Quentin Tarantino,” as it’s identified in the opening credits (what other filmmaker does that?) properly begins, there’s a title card reading “Overture” accompanying an image of a silhouette of a stagecoach pulled by a team of horses, with snow-covered mountains in the background.

As composer Ennio Morricone’s intense minor melody slowly built, I found myself staring into the graphic until the shadows on the mountains became more and more ominous. One even started to resemble a lurching figure with a knife drawn, others looked like pools of blood, winding snakes, etc. This perfectly set the sinister tone for the three hour film following.

Tarantino’s Western opus, which is now playing exclusively in a limited Super CinemaScope 70mm Roadshow release (it begins a regular theatrical release in digital on January 8th, 2016), also features a 12-minute intermission, so it’s obvious that the filmmaker is reveling in giving us an old school cinema experience.

But, being Tarantino, it’s still sprinkled with his distinctive post-modernist stylings, meaning that it’s profane as f***, ultra gorey, and brimming with racially-fueled attitude.

Set in Wyoming, several years after the Civil War, THE HATEFUL EIGHT is broken up into a handful of chapters, recalling PULP FICTION except that there’s no prologue or epilogue.

In the first chapter, “Last Stage to Red Rock,” we are introduced to Tarantino regular Samuel L. Jackson as Major Marquis Warren aka “The Bounty Hunter,” Kurt Russell, who previously starred in Tarantino’s GRINDHOUSE half DEATH PROOF, as John Ruth, who is another bounty hunter dubbed “The Hangman” because he doesn’t kill his captures (he prefers to watch them get hanged after handing them over), and Jennifer Jason Leigh as Daisy Domergue aka “The Prisoner,” a wanted fugitive in Ruth’s custody.

Jackson’s Major Warren, who’s transporting the bodies of three of his bounties, hitches a ride with Russell’s Ruth on his stagecoach as it turns out that the two men had met before. Ruth recalls that Warren has a letter from President Lincoln in his possession, and asks to read it again, but Leigh’s uncouth, rednecky Domergue spits on it, causing Warren to slug her and she and Ruth tumble out of the stagecoach as they are handcuffed together.

Chapter Two, “Son of a Gun,” introduces Walton Goggins (The Shield, Justified, DJANGO UNCHAINED) as Chris Mannix of the infamous Mannix Marauders as Ruth tells us, who also hitches a ride with the crew, who claims, to Ruth’s disbelief, that he’s travelling to Red Rock to be appointed the town’s new sheriff. We get more inklings of back stories as the slickly racist Mannix tells Ruth a tale about how, after the war ended, Warren burned down a Confederate prisoner-of-war camp in a prison escape (Warren: “The whole place was made of kindling…so I burnt it down”) killing 47 men which caused the South to put a reward on his head.

So there, we have half of the eight, and what Tarantino deems relevant info about their reputations, and Chapter Three, “Minnie's Haberdashery,” rounds out the rest - Demián Bichir as Bob (“The Mexican”), Bruce Dern as General Sandy Smithers (“The Confederate”), and a couple of RESERVOIR DOGS, Tim Roth and Michael Madsen, as Oswald Mobray (“The Little Man”), and Joe Gage (“The Cow Puncher”), respectively. 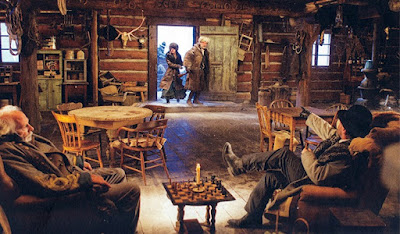 Ruth, Warren, Domerque, and Mannix arrive at the chapter’s title stagecoach stop to find that Bichir’s Bob is looking after the place while Minnie is visiting her mother – or so he says.

The rest of the movie takes place in the log cabin interior of Minnie’s with the most elaborate Mexican standoff that Tarantino has ever mounted. When we come back from the intermission, there’s suddenly a narrator (an uncredited Tarantino) who tells us that during the last scene, somebody seen only by Domergue poisons the coffee (Chapter title: “Domergue Has a Secret”), so we’ve got that mystery to chew on (along with the puzzle of who’s in secret cahoots with who), and we get one of the writer/director’s patented time juggling so we get to see what was happening during the same time as the setup.

In a flashback chapter, “The Four Passengers,” that would be too spoilery to describe, we have a few moments with the only other women in this brutal boy’s club: Tarantino’s trusty stuntwoman Zoë Bell, the motherly Dana Gourrier (as Minnie), and the lovely Belinda Owino. This segment also prominently features Channing Tatum, but damn if I’m gonna tell you how his character factors in.

I won’t go into the particulars of the big ass finale, “Black Man, White Hell,” but will say that it sure packs a bloody wallop.

Leigh’s Domergue, who gets her face bashed in so much throughout the film by Russell’s Ruth that she’s a disgusting, blood-soaked mess (with convincingly broken teeth too) way before the end, can be difficult to look at in ginormous, 70mm close-ups, but the actress owns the role with such intensity that I could never look away.

It’s cool that this is the second ultra violent Western that Russell has starred in this year - the great BONE TOMAHAWK being the other. The guy seems at confident ease with this sort of material (having the classic ‘90s Western TOMBSTONE in his background surely helps) and really rocks the thick, gray handlebar mustache.

And, in his 6th Tarantino film, Jackson stands out yet again. With his sharp, smart delivery, Jackson's Major Warren has many of the film's most amusing lines and moments, and was one of the only characters I cared about getting out of the cabin alive.

It’s fitting that Madsen and Roth are on hand as the Tarantino joint this most echoes is RESERVOIR DOGS with its one-setting, and aforementioned Mexican standoff scenario. I wouldn’t put this in the same class with that outstanding debut or its classic follow-up PULP FICTION, but I enjoyed it more than his last few films, INGLORIOUS BASTERDS and DJANGO UNCHAINED, and I liked those films quite a bit.

It already appears that THE HATEFUL EIGHT may be Tarantino’s most divisive movie yet. I’ve seen critic friends post that they thought it was a cinematic masterpiece, and seen others declare that it’s one of the year’s worst movies.

But I was intensely entertained throughout its three hour running time – I can understand folks thinking that it’s way too long and talky, but I found the dialogue, deliciously laced with evil undercurrent, to be consistently involving (as well as funny as f***), and I devoured how Tarantino through the sharp lens of cinematographer Robert Richardson made the spare scenery so immersive.

I also don’t agree about the charges of misogyny that have been leveled at it. Like almost all the men here, Leigh’s Daisy Domergue is a scary, murderous outlaw, and the actress nailed it in a recent Q & A when she said “She’s a killer. She’s gutsy and her whole identity is, ‘Yeah, give me what you’ve got, it doesn’t mean anything to me. Hit me again, I don’t give a f**king sh*t.’”