Visiting The New Varsity Theater On The Verge Of Its Reopening 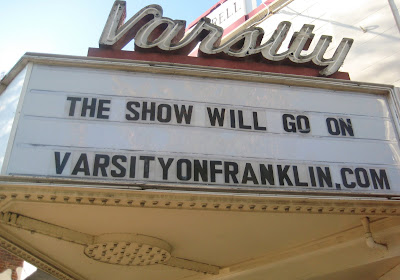 This Friday, the 27th, the Varsity Theater in downtown Chapel Hill is officially reopening (there was a sneak preview showing of THE WIZARD OF OZ on Sunday night, the 22nd). The theater, which closed last June, has been undergoing heavy renovations so I thought I'd visit and check out just what the new owners - Paul and Susan Shareshian - are doing to restore the theater to its former movie-house glory.

Last Friday, Susan Shareshian showed me around as the carpet was being installed and we talked a bit about the changes they've made and their plans for the theater's future. 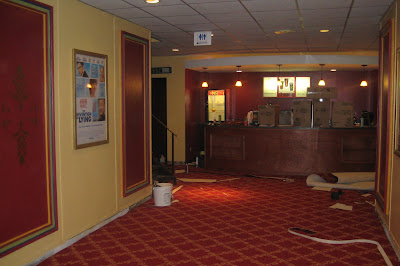 Dan: Well, I’m really impressed with the place. It’s got the old fashioned theater look going in the nicest way.

Susan Shareshian: Thanks - we had UNC art students paint those murals on the panels.

D: Those look incredible and the whole place looks so clean.

D: So what are the Holiday movies you’re going to be showing in December and are they going to be 35 millimeter prints? 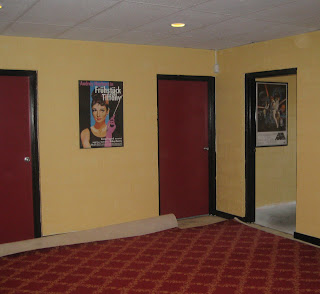 SS: They are all going to be original prints. We have “A Christmas Story”, “Polar Express”, “Miracle On 34th Street”, and “Christmas Vacation.”

D: So I see the birthday room is that going to be where the office was before – have you had bookings for that yet?

SS: We do have bookings for not only birthdays but we have bookings for holiday parties – not just for kids but for adults. We also have some private screenings for people who have made films and want a place to show it. At this point, it’s been about a month, it couldn’t be better.

People are very very excited about it. We’re thrilled. This is all very grass roots, it’s really just Paul and I and our friends and family that are helping us. The goal is on the site to have the calendar so you see what’s coming, also to do advance purchase for tickets.

D: In the theaters how much work has been done?

SS: They are all being re-carpeted too. The chairs are the same, the carpet’s changing, the curtains are new, the moldings are new, and that’s about it. So far. And then in the red theater, the big theater…Paul wants to name them but he can’t come up with good names…

D: So you’ll show the older films in the small theater?

SS: Probably. It depends, “The Wizard Of Oz” we’re going to show in the big theater.

D: When did you decide to take on the theater and make a go of it? Was it right when you heard the theater was going to close?

SS: Yep, and then we had to be really thorough about understanding about how to run a successful theater and what that means. What the distribution companies want and how they work and all that stuff.

Then if we pick some that are my favorites we probably won’t be as busy but that’s okay! We’re also going to do some other cool stuff like Wednesday afternoons we’re going to have foreign films for seniors. We’re going to work out deals with senior communities to have them bused here so they can be dropped off. Things like that. 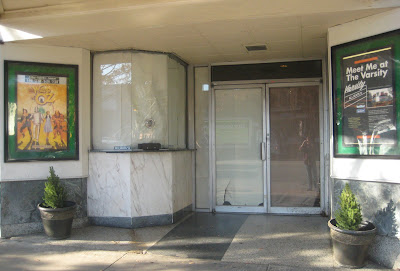 SS: Good! We’re going to do pre-sales starting on Monday. We’ll be here at the ticket window – I’m going to take the paper off the windows on Monday but leave the paper on the doors until Friday.

D: So you’ll be set up for credit cards?

SS: Yep. Mastercard, Visa, and debit but no American Express.
D: Will there be any differences with concessions?

SS: We're working something out with Sugarland across the street to have desserts and we've been also talking about bringing in a gelato machine. But other than that it will be pretty traditional movie theater candies.

I was sorry to miss the sneak preview last night which I heard was a rousing success but, like I said, I'll be there this Friday for the Grand re-opening. It's great to see the theater in such great shape and here's hoping that Paul and Susan Shareshian's enthusiasm and drive will help the Varsity thrive for a long time.

It looks lovely! Thanks for the scoop, Dan!

This is a really great interview great stuff! Glad to know there are still cinema owners out there who care this much. (and bloggers too)