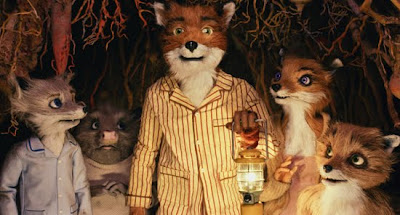 The highly detailed microcosms that Wes Anderson crafts (think the theatrical productions of Max Fischer in RUSHMORE, the family townhouse in THE ROYAL TENENBAUMS, the cross section of Steve Zissou’s research submarine “The Belafonte” in THE LIFE AQUATIC, et al) fit perfectly into the storybook world of Roald Dahl in this film that more than does its title justice. The stop motion technique may at first glance strike one as primitive in these days of CGI saturation but the results aren't disjointed they're jaunty and full of life.

A slick, quick talking George Clooney voices Mr. Fox, a chicken thief turned newspaper columnist, who secretly returns to a life of crime defying a promise he made to his wife (Meryl Streep). Mr. Fox targets farmers Boggis, Bunce, and Bean: “One short, one fat, one lean. These horrible crooks, so different in looks, were nonetheless equally mean” as Dahl described and the film quotes in its opening. Mr. Fox’s son, voiced by Anderson regular Jason Schwartzman, is struggling to be noticed at school when he finds himself in the shadow of his visiting cousin Kristofferson (Eric Chase Anderson) but they bond when getting wind of Fox’s 3 phase heist plan.

With the aid of a wacky opossum named Kylie (Wally Wolodarsky), Mr. Fox pulls off his thieving schemes evoking the murderous wrath of the furious farmers who destroy his tree home forcing Fox and family to plough deep into the earth’s surface to escape. Fox’s tail gets shot off in the initial attack but it does little to discourage his plucky determination and cunning charm.

Anderson’s knack for setting the beats and tone with an eclectic blend of music from American standards to British rock ‘n roll pays off grandly here with composer Alexandre Desplat’s fine score filling in the rest. The Beach Boys “Heroes and Villains” (from “Smiley Smile” not Brian Wilson’s recent re-recording of “Smile”) works wonderfully in the punchy title sequence as does The Rolling Stones’ immortal “Street Fighting Man” in a chase scene set piece.

FANTASTIC MR. FOX is a clever, funny, and fiercely intelligent film. With endearing style and grace it successfully welds the warmth of an old-school children's book sensibility with the hip humor of new-school speaking rhythms. It's the least pretentious and possibly the most accessible of Anderson's ouvre but it's so much more than that; Wes's witty and wise Fox concoction is an instant classic.

Agreed. I'm sad to see that this isn't at the top of the box office returns for the weekend, but I suppose a charming instant classic is still no match for sexy vampires.

i'm gonna make my own blog

Hi everyone! I'm originally from London but am living in Berlin at the moment.
Gotta love this place!