PRECIOUS: BASED ON THE BOOK PUSH BY SAPPHIRE
(Dir. Lee Daniels, 2009) 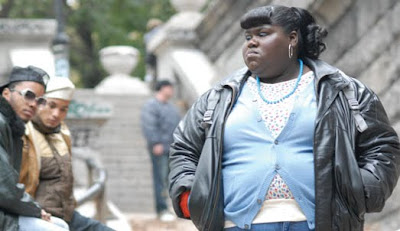 The title may be as hard to swallow as some of the harrowing events on display in this movie, but apparently the film makers thought it was a necessity to avoid confusion with another film titled PUSH that came out last year.

Claireece "Precious" Jones (Gabourey Sidibe) is the name of an overweight illiterate 16 year old living in the Harlem slums of 1987. She is pregnant for the second time by her abusive father and her even more abusive mother (Mo'Nique) also beats her regularly. Precious's only escape from her living Hell of a life is through extreme flights of her imagination.

She fantasizes about being a famous celebrity attending gala premieres and photo-shoots. At one point she looks in the mirror she sees a thin white blonde girl. Fortunately for the film these flashy moments of surrealism are used sparingly as the nitty gritty of reality is where she'll have to learn to survive.

After being expelled for her pregnancy, Precious is sent to an alternate school where she struggles through her everyday existence. She doesn't even know what an alternate school is, she tells us in her sometimes poetic narration, but she gives it a go though intimidated by her teacher, played by the almost too perfect looking for her part Paula Patton, and her new schoolmates.

In terms of performances, PRECIOUS is a powerhouse. Sidibe has presense and poise in the most unpleasant of situations, and this movie is full of intensely unpleasant situations. Mo'Nique, who I've never really seen act before this, is incredible as the broken down beast of a Mother especially in a tear jerking concluding scene.

An Oscar nomination is inevitable for that scene alone.

I have to admit that I did not recognize Mariah Carey in a small but crucial part in this film. As de-glamorized as possible Carey was surprisingly solid as an actress in her role as concerned social worker. 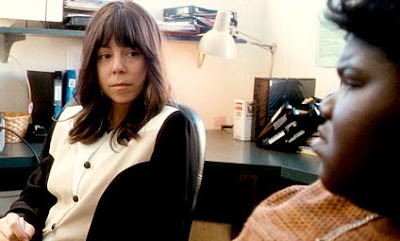 In a film as dark and startling as many thrillers, we feel for Sidibe but that subsides a bit as the structure of the second half of the film is a bit off with some misplaced humor (though I did like somebody mentioning that they just saw BARFLY - "piece of shit"), and ersatz elements like Lenny Kravitz as a male nurse lounging around for no reason.

I predict that PRECIOUS will certainly find an audience as a heartfelt production with controversial content but the acting will be what it's most remembered for. The powerfully touching performances elevate the film far above the middlebrow milieu of most dramas and save it from being another glorified afternoon special. Just barely.

As much as I hate movies that are designed to make you cry and generally feel bad, I will see this one. The performances look amazing.

This looks quite interesting, but sounds really sad. Will be have a look. Thanks for the the heads up in a post.

The nuances in the film such as the poster in the background of the play--For Colored Girls Who Have considered Suicide when Rainbow is Enuf--were not missed. The realistic, painful truths of poverty, teenage motherhood and abuse were portrayed beautifully in this art form of film that should become a classic. Bravo.