Christopher Nolan: The Man and His Motifs Part 2 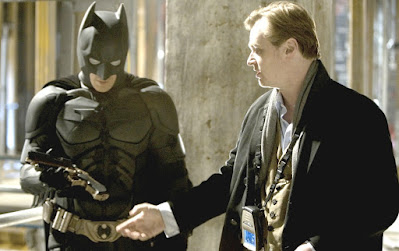 Preceding my viewing of  TENET for the first time - something I’ve been waiting to do since its release last summer (I chickened out going to the theater), I thought I’d revisit this article I wrote about its Director, Christopher Nolan, for the Chinese magazine Front Vision in 2017. As the magazine is aimed towards young people, my style is a bit different from my usual babble. This is the sequel to Part 1, which you can check out here.

But it was the stunning imagery, via Director of Photography Wally Pfister, that often overshadowed the actors. Garnering a well deserved nomination for Best Cinematography, BATMAN BEGINS not only successfully rebooted the series, it joined Sam Raimi’s SPIDER-MAN series in opening the floodgates for a gigantic wave of comic book based franchises that endures to this day.

Nolan followed up BATMAN BEGINS with another screenplay collaboration with his brother, Jonathan, an adaption of Christopher Priest’s 1995 novel THE PRESTIGE, about rival magicians played by Bale and Hugh Jackman in 1890s London. It was another acclaimed non linear opus, marred only by some glaring convolutions, which received a nomination for Best Cinematography, but didn’t win.

The sequel to BATMAN BEGINS, THE DARK KNIGHT (2008) IS arguably the peak of the filmmaker’s career - had more luck in the Oscar department, as it won for the late Heath Ledger’s tour de force performance as The Joker, and for Sound Editing.

Nolan again wrote his brother, Jonathan, and they capped off the trilogy four years later with the equally acclaimed THE DARK KNIGHT RISES (2012), but in between these immensely profitable BATMAN adventures, he constructed his most ambitious and surreal cinematic puzzle yet.

Nolan had previously touched upon the fantastical, but INCEPTION (2010) is more mind-blowing than anything he’s attempted before or since.

Leo DiCaprio stars as a dream extractor who deals in the manipulation of men’s minds when they are asleep. The film contains endlessly inventive dream inside of a dream scenarios which are spell binding, and genuinely scary at times, with overwhelmingly beautiful and towering worlds of CGI-crafted dream set pieces. 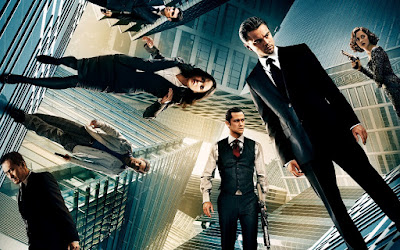 Pfister finally won an Oscar for Best Cinematography for INCEPTION, and the film also won Academy Awards for Sound Mixing, Sound Editing, and Visual Effects. These accolades are well deserved, but the film’s theme of choosing life over illusion or vice versa is what’s most impactful. When it ends, one isn’t sure if DiCaprio’s character is in reality or a dream, and the last shot lingers hauntingly – another Nolan trademark.
2014’s INTERSTELLAR, Nolan’s space epic follow-up after concluding THE DARK KNIGHT trilogy, wasn’t as successful as the former film in the sci-fi department as it tried too hard to be the modern day equivalent to 2001: A SPACE ODYSSEY. But the film, which concerns Matthew McConaughey as an astronaut traveling through time and space to save the world, did do good business and won an Oscar for Best Visual Effects. For the first time since FOLLOWING, Pfister wasn’t on board, and the film was shot by cinematographer Hoyte van Hoytema.

Nolan’s next film, the WW II epic DUNKIRK, arrived during the overstuffed summer of 2017, and held its own at the box office with the help of rave reviews, many of which praised it as being his best film. 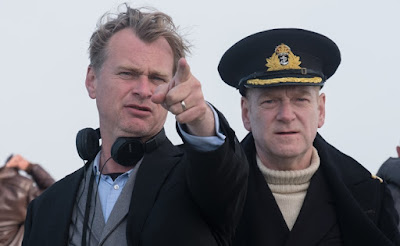 The director’s attention to detail in recreating the Dunkirk evacuation of 1940 is immaculate via the usage of restored boats and planes from the actual event, practical effects, and a minimum of CGI. The non linear Nolan is on display in the three intertwined threads involving the soldiers, a rescue boat, and the air force. The vast visuals provided by the returning Hoytema are immersive enough to make one feel like they’re right there in the middle of the action.

As of this writing, Nolan hasn’t announced what his next project will be. After the exhausting, and emotionally draining production of DUNKIRK, it would be understandable that he may take some time off. The abundance of rich imagery contained in his canon makes it hard to believe that he’s only made 10 movies for there’s more visual power in them than in the entire filmographies of many directors. And as Nolan’s not even 50 years of age yet, he’s likely going to contribute a lot more eye-popping movie magic in the decades to come.
More later...
Copyright 2004-2018 Daniel Cook Johnson at 1:57 PM