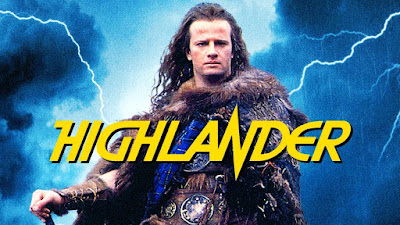 For the last 34 years, I’ve been asked by numerous people (mainly because I’ve worked in video stores and theaters) if I’ve ever seen HIGHLANDER. Obviously I hadn’t, and I would say something like “I’ll get to it someday.” Well, someday came a few weeks back when I got a copy from Netlflix (yes, I still get discs delivered), and got onto my exercise bike to pedal my way through Russell Mulcahy’s 1986 cult fantasy favorite.
My belated viewing of the movie was inspired by the death of the great Sean Connery earlier this fall. I figured that as I’ve seen most of the man’s major work, I should finally tackle this beloved ‘80s epic. Connery’s voice is the first thing heard in HIGHLANDER, as he recites the red text that sets the tone with such high falutin prose as “From the dawn of time we came, movie silently down through the centuries.”

Queen, who, along with Michael Kamen, provides the film’s soundtrack, takes us through the credits and drops us into a wrestling match at Madison Square Garden in 1985 where we meet protagonist Conner MacLeod (Christopher Lambert). When McLeod has flashbacks to a battle in the Scottish Highlands in 1536, I realized that for years, decades really, that I didn’t know the movie’s real premise. I had thought it was about someone from the present (well, mid ‘80s that is) who was somehow thrown back in time to the medieval age and trained by old sage Connery in the ways of sorcery and swordfighting.

I was unaware that HIGHLANDER largely deals with immortality, and that its hero has lived for hundreds of years. MacLeod is being pursued by other immortals, one of which he beheads in a sword fight in a parking garage (parking garage scenes were big in the ‘80s). You see, beheading is the only way to permanently kills an immortal – I did not know that. 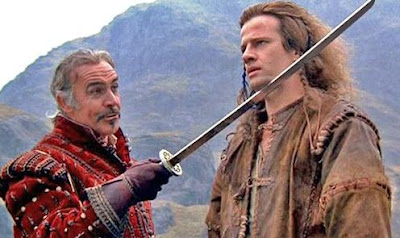 The film bounces back and forth from the gritty Scotland of the 1500s, where we get MacLeod’s backstory as a blacksmith to the gritty New York of the 1980s, where we learn that the man is an antique dealer, which, of course, is fitting. The only part that I got somewhat right is that MacLeod is trained in olden times by Connery’s character, Juan Sánchez-Villalobos Ramírez. There’s love interests in forensics specialist Brenda Wyatt (Roxanne Hart), and McLeod’s past wife Heather (Beatie Edney), but they are little more than requisite damsels in distress, but Hart and Edney both make the most of their underwritten roles (underwritten roles for women in movies like this were big in the ‘80s). 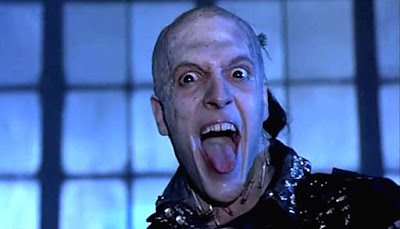 An element I didn’t care for was the villain, named The Kurgan, portrayed by a scenery-chewing Clancy Brown. I’ve seen Brown in other films, and he is nowhere near as overwrought as here so maybe he got lost in the ridiculously over the top character.

So I finally saw HIGHLANDER. For the most part, I enjoyed it for its cheesy ‘80s fantasy feel, and the Queen tunes. But I couldn’t really see that special thing that would make it somebody’s favorite film. Also, why didn't anybody tell me that Sean Connery’s role was only 20 minutes long?!!?

Connery does return for HIGHLANDER II: THE QUICKENING, but I’ve been advised not to go there. Also I’ve been told not to watch the other sequels (there are four!), which honestly I was unaware of. I had heard of the TV series (1992-1998), but like the original film, I never saw any of it. I also didn’t know that there are novels, comics (sorry, graphic novels), an animated series, and video games. Jeez – how was I so oblivious to the vast extended HIGHLANDER-verse?

I’ll most likely heed the warnings especially when they are stated like this: “DO. NOT. WATCH. THE. SEQUELS” – that came from the comments on a Facebook post I made when I announced I was finally watching the first flick.

I suppose that the movie’s most famous line, and tagline, “There can be only one” is right. On that note, I’ll leave you with this: 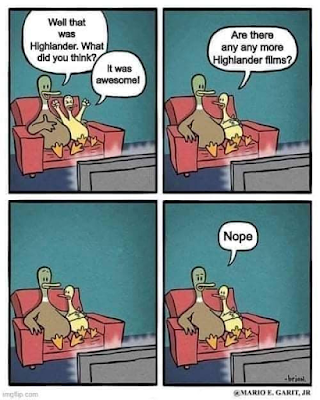