I originally wanted to see this film on the big screen months ago, but, you know, with the pandemic and all, I chickened out more than once. With its home video release earlier this month, I caught up with it. So let’s get to it: 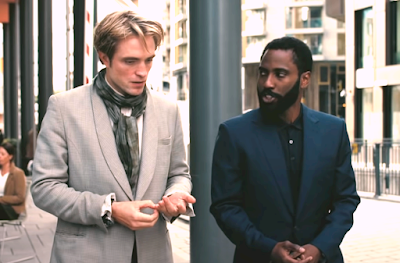 Christopher Nolan’s 11th film was an unfortunate victim of bad timing as it was scheduled for release in July, one of the worst months of the pandemic. TENET was delayed three times until its release in September when it was declared a flop. Although it definitely underperformed, largely due to its ginormous budget, the movie did make enough to make the top #4 on the top grossing films of 2020 worldwide, but of course, that’s because of its lack of competition.

But enough about how much money it made, let’s get to the question - is it a worthwile watch? Well, I would say for the most part it is, but parts were confusing as Hell, and many times throughout I was thinking that I didn’t know WTF was going on. On its simplest level, TENET is a sci-fi tinged spy thriller. At its most complex, it’s an overly cerebral action picture that relies on a high falutin concept as a means to an end.

It’s gonna be hard as hell to describe this film, but I’ll try to work it out. The protagonist, a CIA agent strongly portrayed by John David Washington (BLACKKKLANSMAN), is actually credited as “The Protagonist” (that’s right, and people actually address him that way), is recruited by an organization named Tenet to track down where inverted bullets from the future came from so that World War III can be inverted.

“Inverted bullets,” you may ask? Well, the most important word in the movie (even more than its title) is inversion is when the entropy of a person, or item, is reversed so that they move backwards in time. This is explained over and over, but still never seems to grab hold as an accessible concept.
At one point, our hero asks what’s going on, and someone says “they’re running a temporal pincer movement.” Well, that clears that all up!

Anyway, Washington’s Protagonist is paired with an operative named Neil (a yet again solid Robert Pattinson), who knows more than he’s letting on about their mission. They literally bungee-jump into the world of arms dealing, and forged paintings, and encounter Kenneth Branaugh as Sater, a menacing Russian antagonist (though he’s not named Antogonist), and his abused wife, Kat played by Elizabeth Debicki, who The Protagonist becomes sweet on.

There are several big action sequences in which planes, boats, cars, and explosions run backwards - the best involving a convoy being ambushed in Tallinn, Estonia – but they are stitched together by countless scenes of exposition. One bit was so full of tedious talking bits that I was unsure what was going on in the scene following involving setting up the crash of a 747 aircraft. Why are they doing this again?

One character, a scientist played by Clémence Poésy, even says “Don’t try to understand it,” early on.

Branaugh (in his second Nolan film after DUNKIRK) as Sater is a pretty clichéd sadistic bad guy character with his clichéd Russian accent, yet he has a few moments of effective villainy. Giving a greater sense of gravitas is Hindu star Dimple Kapadia, but she is saddled with perplexingly cryptic dialogue. But then, seemingly everyone else is too. In his eight appearance in a Nolan film, Michael Caine avoids this trap, but that’s probably because he was one scene, which, of course, he nails.

The majority of Nolan’s films have been mind-boggling, but TENET is more mind-baffling. By the end, which involves inverted and non-inverted armies battling each other in the rubble of a destroyed city in Siberia, I think I could follow things better than before, but the inscrutable plot points that got me there were still getting in the way of having fun with this maze-like material.

I would only really recommend this bloated epic (2 and half hours!) to hardcore Christopher Nolan-heads, or folks that love complex sci-fi. Otherwise you may wind up as confused and mind-baffled as I was after a viewing. A repeated line in the film, said by Washington and Pattinson to each other is “What happened, happened.” That’s the only thing I can be sure of - TENET happened.