The 25th Annual Full Frame Documentary Film Festival is now underway (April 7-10), and like last year, the event is entirely virtual. This is the second year of the fest being an only online affair – 2020 was cancelled all together is it fell right when COVID-19 was beginning to hit big.

Obviously, the fest, hosted in the Before Times at the Carolina Theater in Durham, and the Marriott Convention Center, is being held this way because we’re still in a pandemic, and I get that and all, but damn, do I miss driving to Durham, N.C., and doing up four days of premium infotainment! So, while I have a bunch of streamable docs locked and loaded, I thought I’d wax nostalgic about some of the things I really miss that have decorated Full Frame over the years.

Of course, the documentaries are a given. Sure, it’s not the same without seeing them on the big screen, and there are a lot fewer films available than in the Before Times, but there’s still a rich roster of feature and short form docs to choose from. What I’m talking about is the packaging around all the special screenings that I’ve enjoyed covering the sacred event as a very thankful member of the press such as:

1. The marquee (at the top of this post), all the spiffy signage, and, of course, the wonderful staff 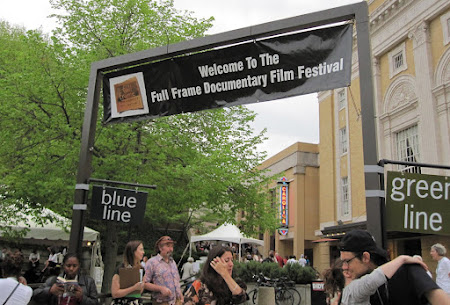 It’s such a nice feeling to walk through the entryway into this doc lover’s heaven each morning of the fest, and be welcomed by the Full Frame brand in full effect, as well as the fine staff, who are always friendly people who clearly really enjoy working the event. 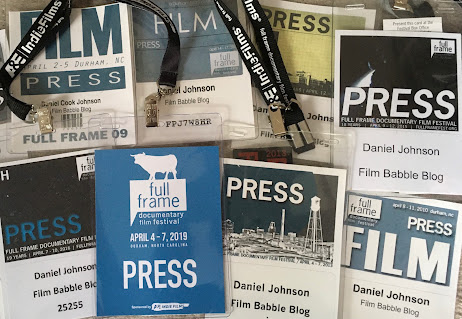 When I got my first press pass lanyard, it felt like the film festival equivalent to having my name up in lights! Well, not really. People rarely looked at mine, so my dreams of spreading the word of Film Babble Blog to the masses never materialized. Still, the lanyards are a nice keepsake for me to hang from doorknobs around my home. 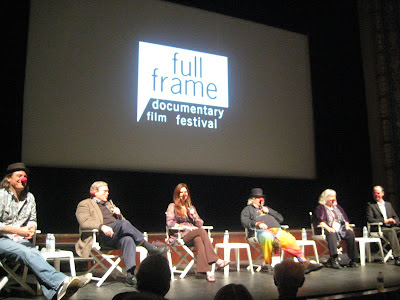 Look at this panel for SAINT MISBEHAVIN’: THE WAVY GRAVY MOVIE from 2009. There’s cinematographer Daniel B. Gold, documentarian God D.A. Pennebaker, Director Michelle Esrick, Wavy Gravy, his wife (Jahanara Romney), and composer Daniel B. Gold onstage at Fletcher Hall at the Carolina Theater. I’ve seen many great panels throughout my adventures at Full Frame, but this one really stands out in my mind. They gave out red clown noses to the audience too. I still have mine.

4. The bustling crowds buzzing about the docs they are about to see or just have seen 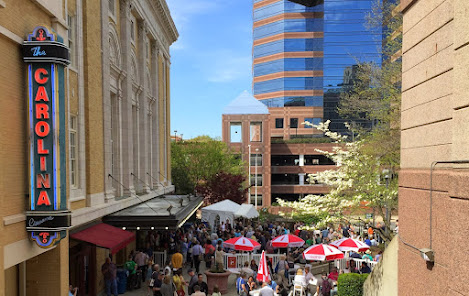 Many a time I have sat people-watching on the outside stairs to the second level of the Carolina Theater eating a meal from George Bakatsias’ great Greek grill in the fancy tent in the venue’s courtyard. The high level of doc excitement contained in the plaza was always powerfully palpable. 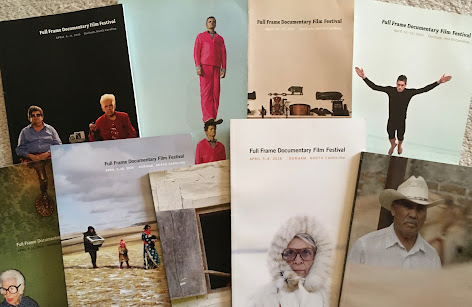 Ah, the programs. They are usually 100-130 pages thick with lotsa pretty pics decorating each doc entry, and handy schedules, filmmaker interviews, and other informative features. I implore festival planners or whoever deals with these things, I know they’re expensive to produce, but please don’t let this be a casualty of the pandemic! When Full Frame comes back next year (I’m not saying “if”), I want to see a brand new 2023 program for festival #26 or, uh, I’ll be sad. 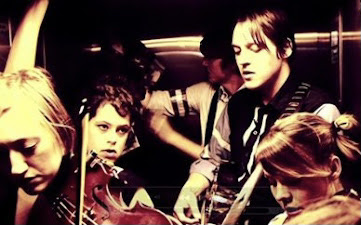 Many of the years that I’ve attended and covered have had one of the offerings on a late Saturday evening to be rockumentaries about such luminaries as Arcade Fire, The Magnetic Fields, Nick Cave, The National, the Avett Brothers, and even Pussy Riot. These tuneful treatments always hit the sweet weekend spot, and I wish I could replicate that feeling at home this go round, but, unless I missed it, there aren’t any music-themed doc options in this year’s line-up.

Okay, enough of my lamenting about the past. It’s time to dive deep into the docs of Full Frame 2022. I’ll be posting as I go so stay tuned to this space, and follow @filmbabble on Twitter.

It sounds like another of fun! I really hope you get to go back next year.

Maybe some year I'll take a roadtrip and get to attend one, too!