Oscars 2022 Recap With The Most WTF Oscar Moment Ever 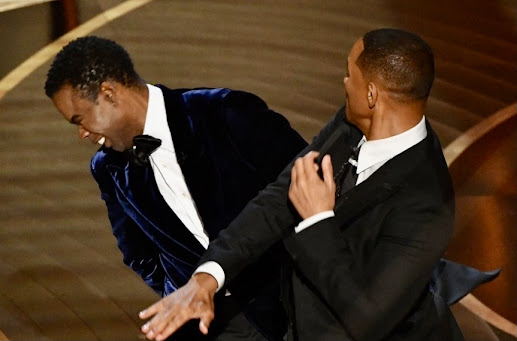 Last night, Rian Heder’s CODA won the Best Picture Oscar beating out THE POWER OF THE DOG, which I had predicted would win. But that wasn’t a surprise as CODA was exactly the kind of feel-good drama that the Academy of Motion Picture Arts and Sciences has rewarded many times over edgier, artsier fare. None of the other wins were surprises either as everyone, myself included, forsaw that Will Smith (KING RICHARD), Jessica Chastain (THE EYES OF TAMMY FAYE), Troy Kutsur (CODA), and Ariana DeBose (WEST SIDE STORY) would take home the gold; and that DUNE would have a tech Oscar sweep.

But what was a surprise, maybe even a shock, is the moment that everyone is talking about now, and has already entered into the realm of legend. You know what I’m talking about – Will Smith slapping Chris Rock because of a joke made at the expense of Smith’s wife, Jada Pinkett Smith. Pinkett Smith was sporting a shaved head due to her struggle with alopecia, an autoimmune disorder that leads to hair loss, and Rock, appearing as a presenter for the Best Documentary feature attempted to make light of this by quipping, “Jada, I love ya. GI Jane 2, can’t wait to see it!”

When Rock cracked this joke, the camera cut to this shot of Smith Laughing. 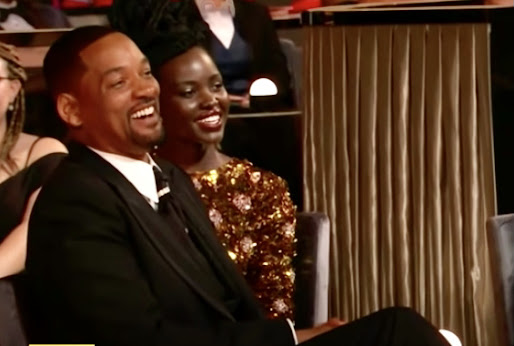 Then the camera cut back to Rock, who was trying to move on in his intro, but had to react (“Uh oh!”) to something we, the home viewers, couldn’t see yet. 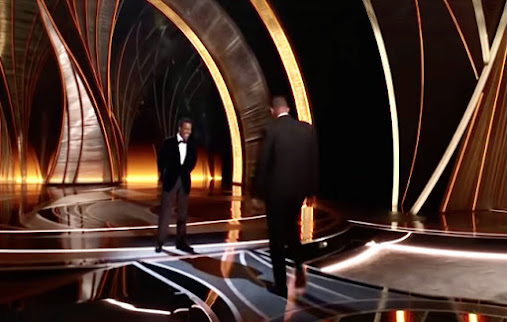 That would be Smith walking onstage towards Rock. It appeared that between the above shot of Smith’s initial laughter, and the long shot of his approaching the presenter, he had seen his wife’s disapproving face, and felt he had to handle the situation.

This is where the sound went off on the ABC broadcast, and I watched in WTF silence as Smith slapped Rock then walked back to his seat. In an exchange that I, and many viewers, didn’t hear until later, Rock, litterally trying to keep a good face, said, “Will Smith just smacked the shit out of me,” to which Smith yelled from his chair, “Keep my wife's name out of your f***ing mouth!”

Rock, keeping composure, said, “Wow, dude, it was a G.I. Jane joke.” Smith again raised his mouth and with more emphasis repeated, “Keep my wife's name out of your f***ing mouth.” This completely quieted the entire Dolby Theater. It was the moment that we all realized that this wasn’t a bit. Smith was completely serious. “I’m going to,” Rock replied, also as serious as a heart attack. The stunned silence remained until Rock did what he could to reclaim the stage, and the night, with a joke that acknowledged that this was sure to be a much remembered event: “That was, uh, greatest night in the history of television.”

A shaken Rock went forward with his presenting duties, and the show went on. Smith, when accepting the Best Actor award, also was a bit off, leaving one to wonder which parts of what he was saying were prepared or improvised. His apology to the Academy, and his fellow nominees appeared to be referring to the instance with Rock, as did his summation through tears: “love will make you do crazy things.” 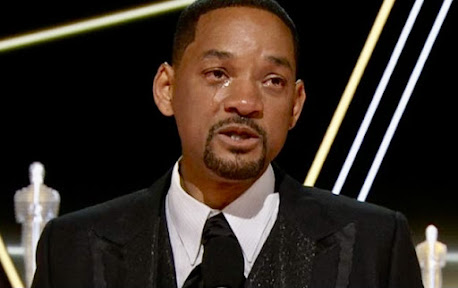 One could argue that Rock’s joke on Jada wasn’t really that offensive, especially in the context of the celebrity roast element of the proceedings. I mean, G.I. Jane is a strong female character, and there are tons of other bald targets that would’ve been more insulting, but in the big public arena that is the Oscars, it was calling attention to the actresses’ appearance in a cheap way, and the audience’s reaction was that it was a cruel jab at Jada.

"There’s like, a different vibe in here...," co-host Amy Schumer remarked later in the evening. This line was funnier than most of the material during the broadcast as so many scripted lines fell flat, and prepared bits such as co-hosts Wanda Sykes, Regina Hall, and Schumer dressing up as coach Richard Williams, televangelist Tammy Faye Bakker, and Spider-Man were just the epitome of lame award show fodder.

One of the only clever moments for me was the PULP FICTION reveal of the Best Actor envelope. 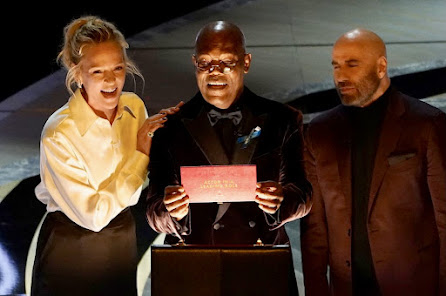 But despite a few funny lines (I loved Schumer’s DON’T LOOK UP diss: “I guess the Academy members don’t look up … reviews!”), some genuinely touching acceptance speeches (Troy Kutsur, and Questlove’s particularly), and the cool James Bond 60th retrospective video set to “Live and Let Die,” this was one of the lamest Oscars ever.

For example, the In Memorium was mishandled with a choir (singing such appropriate numbers as “Spirit in the Sky”), and dancers drawing attention away from the faces and names of those in the industry who have passed in the last year. There was the nice touch of having tributes presented by Bill Murray for director Ivan Reitman, and Jamie Lee Curtis for Betty White, but there was an awkward air surrounding the segment that felt creepy to watch. And, of course, there were ommisions (Bob Saget, Norm Macdonald, Ed Asner, Robert Downey Sr. to name several). 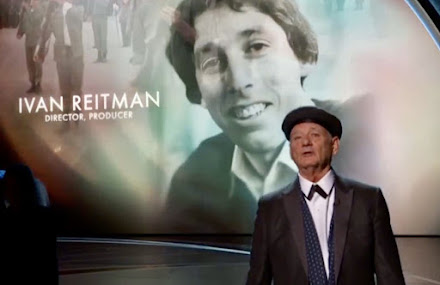 Honestly, creepy would be a good word to describe the whole event. The Oscars have often been a cringe-fest, but this time the dials were going crazy into the red warning danger-danger zone over and over.
The Rock/Smith altercation did bring attention to the event - something the Academy (and ABC) was desperate for after years of bad ratings, and audience indifference - but I doubt it will translate into future relevance.

The 94th Academy Awards ceremony will go down in history for Smith’s shocking, awful reaction to Rock’s hosting duty diss. It sure livened up the show, but in such an unnecessary, and unfortunate way. Like everyone I see on social media who is debating about the moment right, I’m still processing what went down. Even after writing this, all I can think of is what Rock said right after the smackdown landed: “Oh, wow…WOW!”

So it was the most WTF moments in Oscar history on one of the lamest, most cringe-festiest Oscars ceremony ever. Yeah, years and years from now, we’ll all still look back at this one and wince.