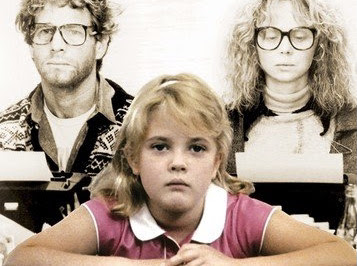 Sophisticated cinema connoisseur and dapper director Peter Bogdanavich, who passed away this week, inspired indie filmmakers, like Wes Anderson and Noah Baumbach; the many movie critics who dream and have dreamed of making movies themselves, and folks who wear a bandana around their neck like it’s an ascot.

But a 1984 rom com, IRRECONCIBLE DIFFERENCES, starring Ryan ‘O Neal, Shelly Long, and Drew Barrymore, then a hot commodity because of E.T., used more than an outline of Bogdanovich’s scandalous love life in the ‘70s to beef up the backgrounds of a fame-seeking married couple who are getting sued for divorce by their daughter. 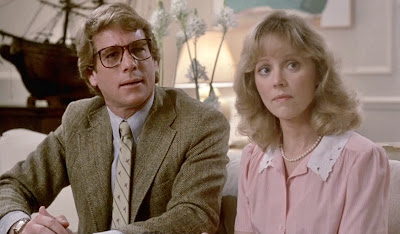 Let’s start with ‘O Neal in the Bogdanovich role. This makes some sort of sense, as O’Neal starred in three of Bogdanovich’s films. O’Neal’s character, Albert Brodsky, earned a Doctorate of cinema at NYU, then had a thesis published which led to an offer for a professorship at UCLA. O’Neal, who plays the part perfectly with crack comic timing and a palpable on-point pathos, his Brodsky hits the road to Los Angeles to accept the job, and pursue his dream of becoming a director.

Bogdanovich also started in New York, working as a programmer of films at the Modern Museum of Art, and writing movie criticism for Esquire. In the mid ‘60s, Bogdanovich and his wife, Polly Platt (1939-2011), moved to LA to pursue his dream of becoming a director. Both film historians, Bogdanovich and Brodsky meet an influential grey-haired director/producer – in Bogdanovich’s case, cult legend Roger Corman; in Brodsky’s case, David Kessler (Sam Wanamaker) - through which they get their first big breaks.

Alongside Brodsky is Long as Lucy Van Patten, an aspiring children-books writer. While her husband is struggling with a screenplay, she works on getting her real estate license, but she quits that to help with screenplay and becomes its co-writer.

Except for the c0writing, Bogdanovich’s spouse, Platt, has little in common with her big screen counterpart. While a hitch-hiking Allen met Lucy on a muddy road out in the middle of Indiana, Peter met Polly in summer stock in New York, but they did drive across country together to the same destination.

As Peter (I’ve decided to go with the principals’ first names from here on), learned the ropes as an auteur, Polly became a highly acclaimed production designer, and worked on four of her husband’s films.

Which brings us to the filmographies of Albert and Peter. We’ll start with the fictional one, Albert. With the help of his wife, Albert’s debut, An American Romance, is a big hit, which puts him on the movie map, while Lucy is left out of the lime light. Their next film, Gabrielle, also connects with audiences, but signals the end of Albert and Lucy’s marriage when Albert falls for the actress cast in the lead. That would be Sharon Stone, in one of her first films, as the gold-digging damsel, Blake Chandler.

The third time isn’t the charm for Albert, whose bloated GONE IN THE WIND-esque “Atlanta” movie-musical project flops big time, and Blake leaves him for the limo driver. 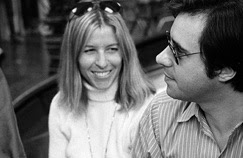 Back in the real world, Peter made double the amount of movies than Albert, but he had to wait until his fourth film for his scandal. A true classic, THE LAST PICTURE SHOW, won two Oscars, and slew of other awards, and it won Peter the heart of budding starlet, Cybill Shepherd. Polly left Peter, though she still worked on a few of his films, and Peter and Cybill went on to make two huge financial duds, DAISY MILLER and AT LONG LAST LOVE. Elements of these films are parodied in Albert’s “Atlanta,” and another similarity is that after these failures, Cybill left Peter for an auto parts dealer.

Returning to the world of make believe, Lucy’s arc involves having a best-selling book which seemingly tells all about her and Albert’s relationship, something Polly didn’t do (though there’s supposed to be her unpublished memoir that will maybe one day see the light), but she has appeared in numerous documentaries like EASY RIDERS, RAGING BULL, and DECADE UNDER THE INFLUENCE, giving insights into her days with Peter. 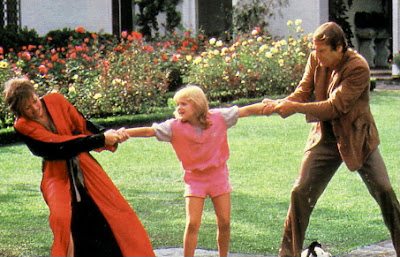 Putting aside the comparisons between Peter Bogdanovich and Albert Brodsky, IRRECONCILABLE DIFFERENCES holds up as a witty look at divorce among the ups and downs of show biz. It was an interesting idea for them, that being rom com writer gurus Nancy Myers, and Charles Shyer, to fashion much of the plot around the tabloid details of a famous director’s dalliances. More than interesting is that it largely works.