Opening today exclusively in the Triangle at the Rialto Theater in Raleigh: 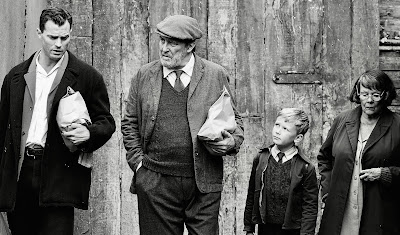 Kenneth Branagh’s 19th film as Director, but only second as writer, is one of his best films.
Set in Belfast, Northern Ireland in 1969, the story concerns life in the time of “The Troubles,” a long-running conflict that pitted the Catholics against the Protestants. The riots that result, as well as the reactions of the townspeople are seen through the eyes of Buddy (Jude Hill), a 9-year old who witnesses a violent mob infiltrating his neighborhood in the film’s opening sequence.

Buddy’s Pa (Jamie Dornan), and Ma (Caitríona Balfe), have friction over whether they should relocate, as Pa commutes to England for work and wants his family with him. Ma doesn’t want to leave because she’s emotionally attached to her home since birth. More interesting is Buddy’s grandparents, Granny (Judi Dench), and Pop (Ciarán Hinds). Pop’s love advice to Buddy, harboring a crush on a classmate (Olive Tennant), oozes with wisdom and charm. I wish Dench were given more to do, but her dour appearance fits in authentically with the material.
Buddy falls into a bad crowd, well, mainly one member of a bad crowd really, Moira (Lara McDonnell) who tries to train him how to shoplift. This makes for an amusing scene in a local shop in which a frantic Buddy steals Turkish Delight, which he doesn’t even like. Dornan’s Pa has his neck breathed down heavily by the sinister Protestant rioter Billy Clanton (a perfectly cast, and effective Colin Morgan), who wants Pa (really, that’s how he’s credited) to join and be loyal to the cause.
Watching Buddy amble around his historically bleak environs may strike some as reminiscent of JOJO RABBIT, but, while there is a good deal of humor in BELFAST, it’s more grounded and less goofy. Completely different in its sentimental tone as well.
Although BELFAST is a black and white picture, it’s a nice touch that when the family goes to the movies, the scenes we see from CHITTY CHITTY BANG BANG, AND ONE MILLION YEARS B.C. are in color. There are other color moments as well.
The film is appropriately awash in mostly classic tracks by Irish singer-songwriter Van Morrison, including a new song, “Down to Joy.” The new tune is being talked about as a possible Oscar nominee, despite that it dates back to the early ‘70s. I guess because it was unreleased, re-recorded for the movie, and its title is slightly re-worded, it qualifies.
Even with feel-good contrivances such as how a confrontation with Clanton is thwarted, and Dornan’s rendition of the pop standard “Everlasting Love,” which I thought had to be someone else’s singing, but I was wrong), BELFAST is a modestly moving movie that’s optimistic about peace, families sticking together, and how childhood is a precursor to a complicated life. All of the cast are exceptional, but Hill as the conflicted kid in the middle of it all, puts in a convincing performance that provides the film with its heart. He's one to look out for.
Brangh, who considers this his most personal work, has produced a touching, loosely autobiographical period piece that ought to satisfy independent film audiences, and simply entertain whomever it happens upon. Expect BELFAST to get lots of awards season action (in fact, it already has).