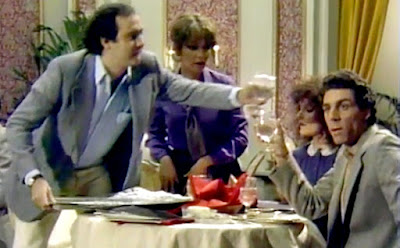 Five years into the run of the vastly successful NBC comedy/music show, Saturday Night Live, a competitor came along. It was called Fridays and it featured a cast of comic actors, hip rock artists, and just like SNL it was live, and late night.
As you may have quessed, Fridays, was a blatant effort to completely copy SNL with sex, drugs, and rock n’ roll being the shared themes. However, later Seinfeld stars Michael Richards (Kramer!), and Larry David got their start there, and the show had tons of great musical guests including The Clash, Devo, Rockpile, Stevie Wonder, Rockpile, and the Pretenders.
One of the most notorious sketches in Fridays’ three season history, has to be what has been labeled “The Marijuana Sketch/Onstage Fight-cum-Prank.” It involved two couples at a restaurant, and unbeknownst to each of them is that they have individually smoke a joint in the restroom. This premise is actually explained to the audience by a cast member at the start of it, something SNL never did.
The dinner party consists of Michael Richards, Brandis Kemp, Maryedith Burrell, and Kaufman, the only one who doesn’t want to go along with the comic conceit. When it’s his turn to go to the restroom then come back stoned, something feels off. Kaufman sits down and spaces on what his next. After a long awkward pause, he offers up that he “can’t play stoned,” and that “he feels stupid.”
Kaufman’s fellow actors are visibly annoyed by his behavior, or lack of behavior, with Chartoff saying, “you feel stupid?” amid nervous giggling. Then, a remarkable thing happens. A frustrated Richards gets up from the table and walks off camera. “Where are you going?” Kaufman asks even though he doesn’t act like he cares for the answer. 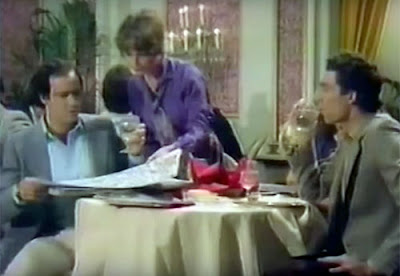 Seconds later, Richards reappears holding a stack of cue cards that he abruptly drops down in front of Kaufman. Our abstract genius retaliates by throwing his glass of white (probably water as Richards. A skirmish in which Richards looks like he’s going to come to blows is quickly abandoned as the players announce “Hey, it’s all in fun.” After some playful shenanigans, the show fades to commercial. Watch it below:

So that’s how it went down on February 20, 1981, but how does it compare to the movie version. I’m talking about Milos Forman’s 1999 biopic MAN ON THE MOON, which told the story of the surreal comic artist Andy Kaufman as portrayed by the then hot Jim Carrey. The film was full of recreations of Kaufman’s bits, with Carrey being aided by a huge roster of actors playing themselves including most of the cast of the hit sitcom Taxi, David Letterman, and Andy’s wrestling nemesis, Jerry Lawler.

But when it came to the “The Marijuana Sketch/Onstage Fight-cum-Prank” sketch, nobody was acted by the original actors. Now, Chartoff and Burrell at the time were appearing in many TV shows and films (Chartoff voiced a character in a string of RUGRATS movies), so I hope that they were at least asked. Richards was on top of the world in the late ‘90s because of his run as Kramer on the ratings blockbuster Seinfeld, but that had ended by the time MAN ON THE MOON went into production. I wonder if he was ever considered for the role of, uh, himself. 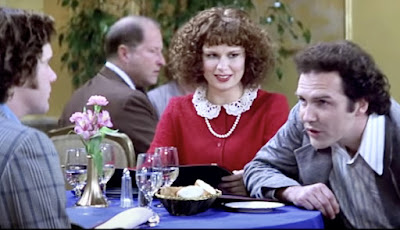 So who did get the part? That would be legendary comedian Norm MacDonald, who sadly passed away last week. MacDonald had previously appeared in Forman’s THE PEOPLE VS. LARRY FLYNT so apparently the director appreciated MacDonald and cast him in another small role in another biopic. MacDonald’s character name in the uncredited role was unsurprisingly named “Michael.”

The other dinner guests were filled by Caroline Rhea (as Melanie) and Mary Lynn Rajskub (credited as “Mary”) who acted as they were offended by Carrey’s Kaufman (which they may have been). Rhea had the added tag to “You feel stupid?” – “What about us?” Shots of uncomfortable, shocked people in the audience are sprinkled throughout this scene, as well as cuts to Vincent Schiavelli as an ABC Executive, who laughs conspiratorially at the players’ every utterance. 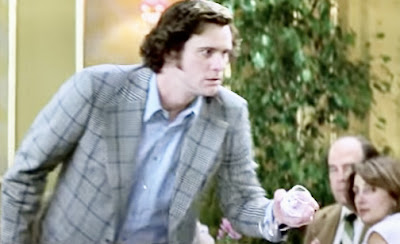 The big finale of the sketch takes some big liberties. MacDonald yells “Cut it out!” at Carrey, which Richards didn’t say, and after the kerfuffle, comedian/writer Jack Burns (played by Kaufman collaborator Bob Zmuda) comes out to tell Kaufman to “Get off my stage.” This also didn’t happen, but Burns and Kaufman (but Andy’s and Jim’s) do scuffle for a matter of moments. Then Schiavelli’s ABC Exec announces to everyone that this was a “happening,” and we see the audience delighted that they’ve been pranked. As this took place during a commercial, it could’ve happened but I doubt it.

Schiavelli has Carrey’s Kaufman address the camera when they start back to tell them it was all staged, but as expected Andy wants to again subvert the script. In a tight close-up, Kaufman starts off calmly explaining the situation, but ends up ranting about it being a “lie,” and a “cover-up” to the Exec’s chagrin. Now, this didn’t happen that night, but the moment is somewhat based on Andy’s appearance on the next episode of Fridays, though he made no such paranoid claims there.

This is a minor incident in this business we call show, but it’s a fascinating one (at least to me) that captures a weird, experimental era in sketch comedy in which audiences were taxed to figure out what was real or not. Like “The Marijuana Sketch/Onstage Fight-cum-Prank,” many examples of this aren’t very successful. And the movie recreation failed, as it’s too strained and self conscious in tone to really tap into the odd vibe of the Fridays exercise. The original was more interesting than entertaining, but it still had an edge that is impossible to convincingly imitate. 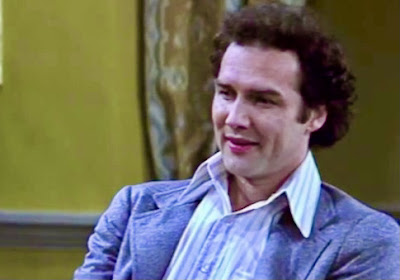 It was still fun to see Forman and the cast try in MAN ON THE MOON. Even if they couldn’t quite pull it off, I’ll give them a high mark for plopping Norm MacDonald down into the middle of this attempt to conjure up some magical Kaufman chaos.