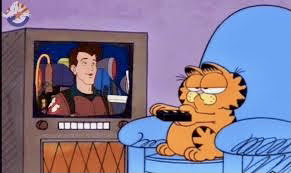 If you were around in 1984, you surely were aware of the smash hit sci-fi comedy, GHOSTBUSTERS. The Bill Murray/Dan Aykroyd/Harold Ramis ensemble vehicle,  was the second biggest grossing movie of 1984 (right behind BEVERLY HILLS COP), and with cereals, action figures, a best selling soundtrack, etc., the Ivan Reitman directed blockbuster was a true phenomenon.

During the same flashy ‘80s era, another comic phenomenon was making a splash in the funny pages, and a series of successful books. That would be Garfield, the orange tabby cat that loves lasagna, hates Mondays, and makes his owner’s life a living hell. Created by cartoonist Jim Davis, Garfield made his newspaper debut in the strip, Jon (named after the cat’s owner), in 1976, but became kind of a big deal in 1978, when the cartoon went into national syndication.

In 1980, Garfield made his television debut in a Special entitled The Fantastic Funnies. In the fat feline’s segment, actor Scott Beach provided his voice. Following that, actor/writer/voice actor Lorenzo Music voiced Garfield for a series of specials, video games, ads, etc. 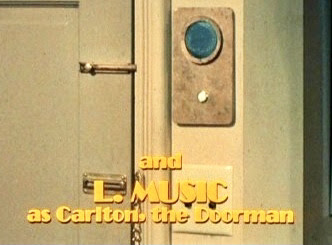 Music was best known for his never seen character Carlton the Doorman on the popular sitcom Rhoda, which ran from 1974-1978. The perpetually drunk Carlton, speaking through an intercom, had a droll, laconic delivery that was a reliable laugh getter. There was even an animated Carlton pilot, but it wasn’t picked up for a series.

It was just as well as Garfield’s cartoon adventures were loved by viewers throughout the ‘80s. But after the huge hit that was GHOSTBUSTERS, an animated series based on the film was rushed into production, and who did the producers look to fill the shoes of Bill Murray’s Peter Venkman? Garfield’s Lorenzo Music, that’s who! 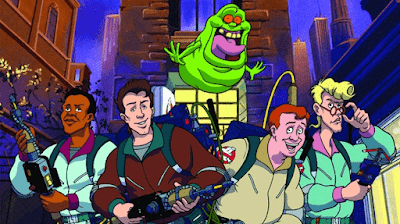 So at the same time that Music was churning out Garfield specials, he spent two seasons aping Murray’s slyly sarcastic persona on The Real Ghostbusters (so named because of some legal whatnot with another show by the same name).

Years later, in 2004, GARFIELD: THE MOVIE, a big budget revamp was released to ginormous box office. Music passed away in 2001, so Garfield’s voice was taken over by, you guessed it, Murray. Despite the background, I doubt Murray referred to Music’s work, as he seems like an actor who has no interest in character research. 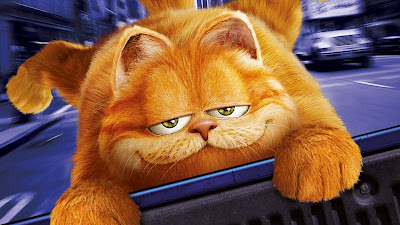 Murray later revealed that he took the GARFIELD gig, which included a sequel, GARFIELD: A TALE OF TWO KITTIES, because he thought that the first film was written by Joel Coen, of the Coen brothers, but it turned out to be Joel Cohen, who was quite a different style of scribe. Although he participated in the sequel, Murray expressed regret of doing the films. This was summed up in his cameo in ZOMBIELAND in which he was asked while dying if he had any regrets. “Well, maybe Garfield.”

While there hasn’t been a third GARFIELD to complete the trilogy, in the ZOMBIELAND sequel, Murray puts in another cameo in a flashback in which he is doing promotion for the fictional third entry entitled GARFIELD: FLABBY TABBY. That way Murray can have his cake and eat it too. 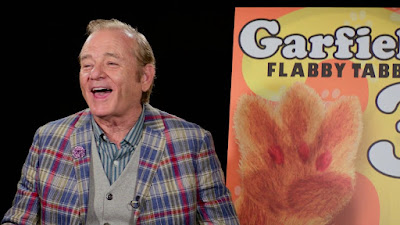 It’s interesting to note that the sequels to GHOSTBUSTERS and GARFIELD are the only sequels Murray has made (I’m not counting the ZOMBIELAND movies as those are cameos). It’s funny that these guys are forever linked. I can’t think of a similar situation with such symmetry between two actors. If you can, do tell – in the comments section below.