A Lot Of A GHOST, Not Much STORY

Opening today at a few theaters near me: 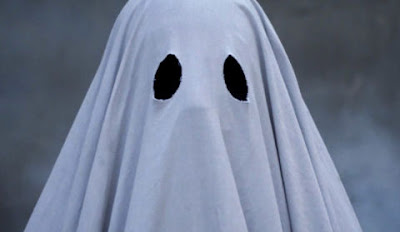 I walked out of this extremely weird movie in a daze. I wasn’t sure what the hell it was that I just watched. I mean it’s a movie about a ghost who appears as a guy in a children’s Halloween costume - that is, seriously, a white bed sheet with eye holes.

Let me backtrack - the film begins with Casey Affleck and Rooney Mara as a couple living in a house in semi-rural Texas who appear to be preparing to move. Affleck gets killed in an automobile accident and we cut to Mara identifying his body at the hospital. After she places the sheet back over his head and leaves, Affleck sits up and then walks through the building’s halls unseen by anybody because, you know, he’s a ghost now.

He makes the journey back to their house and stands there motionless watching Mara as she mourns. He watches her eat a pie. A whole pie. This scene feels like it goes on forever. Mara eats until she goes to the bathroom to throw up in the background.

Time passes and the ghost stands motionless watching Mara pack up and move away. A new family made up of a single mother and her two kids move in and he watches them. One night in a fit of anger (I guess) he throws and smashes dishes in the kitchen which scares them and they move out shortly after.

Then the house appears to be taken over by hipsters who have impromptu parties with pretentious discussions. Singer/songwriter, and friend of director Lowery, Will Oldham delivers a speech about mortality and the futility of time (I think) that perhaps spells out the movie’s meaning but I dunno.

At some point, the ghost waves to another ghost (identical bed sheet situation) through the window of the house next door and they speak in subtitles with no sound (the ghosts get subtitles but the Spanish-speaking mother and her kids don’t). The other ghost says he’s waiting for someone, but he forgets who. All through this, Affleck’s ghost scratches at one of the walls trying to retrieve a tiny note that Mara’s character wrote and left in a crack.

More time passes, and the house gets demolished by bulldozers, and a shiny, modern building is built in its place where the ghost stalks the glass halls. Then we go back in time two hundred years to when European settlers were taking over the land. He stands and watches as history repeats and ends up watching Affleck and Mara again, then he watches as Affleck becomes a ghost, who he watches from behind.

I wonder how much Affleck actually visited the set because for the bulk of the movie it could’ve been anybody under that sheet. Especially since you can’t see eyes behind the holes – just darkness.

The self conscious artsiness of this film, which is all told in long, stationary shots in a square aspect ratio, makes me think that Lowery is trying to get as far away from the commerciality of his last project, PETE’S DRAGON, as he possibly can. Horror fans will likely be baffled by it because, except for the moment the bulldozer comes crashing through the wall, it’s not a scary experience. Haunting is more what Lowery was going for, but while it does indeed have some effective eeriness, it just goes on and on without a truly meaningful point to be made.

There’s maybe a good 20-minute or so short film that could’ve been made with these elements that would spare us all the existential tedium. The only story here is the passing of time, and that wasn’t enough to keep me engaged.

But it is a gutsy move for A24 to release a film such as A GHOST STORY during the overcrowded dog days of summer - I admire that - but I can only recommend this picture to people who like being weirded out – very slowly.