THE BIG SICK: A Delight Through And Through

Now playing at many indie art houses, and opens wide Friday at many multiplexes: 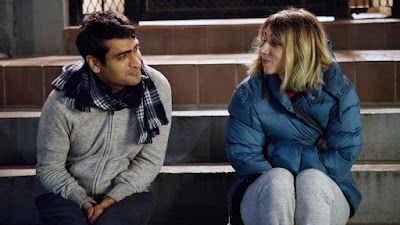 This is one of the most buzzed about independent movies this summer, and it’s for good reason because it’s a real charmer.

It’s not your typical rom com as it’s a love story with an autobiographical bent, and it mixes in a considerable amount of emotional drama between its abundance of laughs.

The film concerns Pakistani Kumail Nanjiani, best known for his role as acerbic programmer Dinesh on HBO’s Silicon Valley, as a stand-up comedian/Uber driver who falls for Zoe Kazan as a woman based on Nanjiani’s wife, Emily V. Gordon.

Gordon, who hails from Winton Salem in my home state, North Carolina, and Nanjiani co-wrote the screenplay which depicts their early relationship when begins when Kazan’s Emily heckles Kumail during his act at a small Chicago comedy club. Actually she yells “Whoo!” but, as Kumail explains to her at the bar later, “heckling doesn’t have to be a negative.”

The two hit it off and hook up that night while watching THE NIGHT OF THE LIVING DEAD back at his place that he shares with fellow comedian Kurt Braunohler. Emily and Kumail, despite that she says she’s too busy studying to be a therapist, begin dating, while his parents (Anupam Kher and Zenobia Shroff) try to set him up in an arranged marriage.

Emily discovers this when she comes upon a cigar box of headshots of the many Muslim women that are vying for his hand (“Are you judging Pakistan’s ‘Next Hot Model?’), and after an emotional argument they break up.

Shorty after, Kumail learns that Emily is in the hospital and has to be put into a medically induced coma, and he waits with her parents (Holly Hunter and Ray Romano) who he’s never met before, and who know that the couple is broken up. Awkward!

Gradually Kumail and Emily’s folks bond with them even attending one of his stand-up slots. The scene turns ugly when a frat boy douche yells “go back to Isis” at Kumail, and Hunter’s character Beth goes off on him.

Since we know that in real life Emily came out of the coma, it’s no spoiler to say that that’s what happens here, but I’ll refrain from going further about the plot.

Nanjiani makes for a witty, likable lead who can hold his own in the well executed dramatic moments that dominate the second half of the film. Kazan is equally appealing, quickly quipping through the couple’s courting and effectively exhibiting more layers during her recovery. Although she spends the bulk of the film motionless in a hospital bed, Kazan shows in her awake scenes that she’s no “manic pixie dream girl” (Nathan Rabin™), and the chemistry between her and Nanjiani is palpable.

Hunter and Ramano nail their parts as Emily’s concerned parents, and there are short but sweet turns by the supporting cast including SNL’s Aidy Bryant, Bo Burnham, and Braunohler as Kumail’s fellow comedian friends, and Kher (a Bollywood legend who’s been in 500 films) Shroff, and Adeel Akhtar as Kumail’s brother.

THE BIG SICK is a very amusing and heartwarming love story that proves that there’s life left in rom coms. The genre appears to have died out at the multiplexes, but with help from producer Judd Apatow, this indie refreshens the formula. As I’ve written on this blog before, director Michael Showalter in such films as THE BAXTER and THEY CAME TOGETHER, seems to have a thing about deconstructing rom com tropes, but it appears that he’s best here and in his last film, HELLO, MY NAME IS DORIS, when he keeps the narrative grounded in relatable reality.

This is Showalter’s best film, the best comedy I’ve seen this year, and a winner all around for Nanjiani and Gordon and everyone involved. It’s a big success at my local indie art house, the Rialto, where I work part time, as I’ve heard a lot of loud laughter from the crowded theater every time it screens. A delight through and through.