Notes On DUNKIRK (Three Weeks Into Its Run) 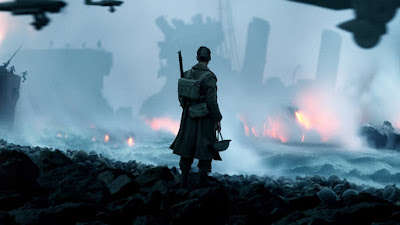 It’s been three weeks since I first saw Christopher Nolan’s WWII epic DUNKIRK, but I wasn’t in a good headspace then. My wife and I were having some major work done on our house involving installing hardwood floors so I was exhausted from moving tons of books, CDs, DVDs, records, etc.

I had mixed feelings about the movie, but I recognized some greatness there so I decided to see it a second time. But this time was in the way Nolan intended it to be seen - in IMAX 70 mm. The visuals were indeed impressive and the story threads came together better than my previous viewing, but I still felt a disconnect.

Nolan’s attention to detail in recreating the Dunkirk evacuation of 1940 is immaculate via the usage of restored boats and planes from the actual event, practical effects, and a minimum of CGI.

I’ve heard many folks complain that in the “The Mole” storyline the characters are hard to tell apart. Fionn Whitehead as a private named Tommy, who is pretty much the protagonist of the thread, and a fellow soldier played by pop singer Harry Styles do blend in with the masses on the docks, but perhaps that’s the point.

“The Air” narrative which has Tom Hardy, and Jack Lowden on a mission to take down German dive bombers over the infinite ocean may be the most exciting of the three intertwined scenarios, but several times Nolan cuts away right as the scenes are getting the most compelling. Lowden almost drowning because he can’t get his cockpit open after crash landing in the sea deserves to be seen in full, but Nolan can’t help but dive back into another thread, and the momentum gets lost.

The most emotionally grounded storyline is “The Sea” as a stoic Rylance holds steady to his goal to save as many men as possible, even when a shell-shocked soldier played by Cillian Murphy that his boat picks up violently tries to get him to turn his boat around. Murphy, a veteran of a few Nolan films (BATMAN BEGINS, INCEPTION), is only credited as “shivering soldier,” and that about sums up his role.

Kenneth Branagh, as a British Naval Commander, brings a touch of dignified gravitas to his part, but mainly just stands around on the pier watching what’s happening around him.

So basically, don’t go in expecting fully fleshed out characters. There may be precious little dialogue, but there’s plenty of genuine suspense, gripping action, and incredibly vivid cinematography (thanks to Hoyte van Hoytema’s 54-Pound IMAX Camera) to make up for it, and to make up for the failings of Nolan’s previous film, INTERSTELLAR.

DUNKIRK is engaging to a considerable degree, but not as immersive an experience as it could’ve been as its fractured narratives bog it down. Hans Zimmer’s intense score, which at times beautifully blends with the scary sound of attacking dive bombers, does a lot to tie together the three strands, but they still clash in ways that was at times frustrating.

I still would recommend Nolan’s work here because there is a lot of power in the imagery and the depiction of touching humanity, which, as I said before, is most present in Rylance’s storyline.

It may fall short of being a masterpiece, but it comes close – especially when seeing it a second time in IMAX 70 mm. Maybe the third time will be the charm?