Now playing at both multiplexes and indie art houses: 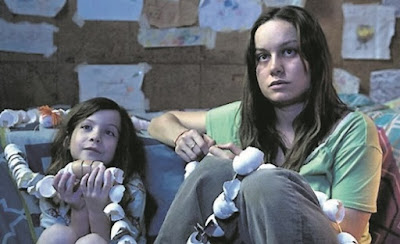 Brie Larson’s sturdy performance in SHORT TERM 12 is considered by critics to be her breakthrough, but it’s her powerful work in ROOM, Lenny Abrahamson’s adaptation of Emma Donoghue’s award-winning 2010 novel, that should make the actress a household name.

Larson plays Joy Newsome, a young woman living under horrifying conditions. For the last seven years Joy has been trapped in a sound-proofed, concrete garden shed in the backyard of the house of her abductor only known as Old Nick (Sean Bridges).

With Joy is her son, five-year-old Jack (first-time child actor Jacob Tremblay), the result of one of many rapes that Joy has suffered over the years. To Jack, the small, filthy space they live in is their entire world. Joy has maintained this illusion by telling Jack that there is nothing beyond the four walls of “room” except outer space, and that what he sees on their crappy beat-up TV is make believe.

However, the day has come for Joy to tell Jack the truth, because she’s devised a desperate plan for escape. Joy fakes Jack’s death, and rolls him up in a rug for Old Nick to take away in his pick-up truck. Joy instructs Jack to wriggle out, jump from the bed of the truck and run for help.

The plan is successful and Jack is able to direct the police to the shed, and mother and son are finally free. Jack is astounded at how big and limitless the real world outside the room is, while Joy struggles with rehabilitation.

Joy discovers that her parents (Joan Allen and William H. Macy) have divorced, and that her mother has a new boyfriend (Tom McCamus). Without spelling it out, Macy conveys how uncomfortable he is with having a grandson who is a product of rape.

Needing financial help, Joy agrees to do a prime time interview, but it doesn’t go well because of the glibly insensitive questions posed by the show’s host (Wendy Crewson).

This leads to Joy spiraling down into depression, and attempting suicide. Jack, still wide-eyed at his surroundings, gets his long hair, which he calls his “strong,” cut by his grandmother, and sends his ponytail to his mother in the hospital. This gesture helps in Joy’s recovery, and we see that once again Jack has saved his mother.

Abrahamson, whose film FRANK (the one with Michael Fassbender as a musician who wears a giant papier-mache head) was one of my favorite films of last year, handles this material with great poise. Every scene seems to have profound purpose, especially one late in the film where Joy and Jack revisit room for closure, though composer Stephen Rennick’s score lays it on a bit too thick at times.

I was incredibly moved by ROOM. It’s a durable drama that has moments of gripping suspense - i.e. the escape sequence – but it is its tender concern for its characters that will stay with me the most. It’s largely due to the stellar acting of the mother-son duo.

Tremblay puts in an impressive naturalistic performance for a 5-year old, although his voice-over narration, a totally unnecessary device here, gets a little icky.

Larson, who may be best known to mainstream movie-goers as Amy Schumer’s sister in TRAINWRECK, excels as Joy. One can feel her strained pain in her every expression, and all of her interactions with Tremblay shine with authenticity.

It’s flawless work, a career best, and if she doesn’t get nominated for a Best Actress Oscar, I’ll be very offended.

ROOM’s dark disturbing first half is exceedingly effective, but it’s the way that its second half earns its uplift that makes it a fully rounded, and satisfying emotional experience.