One Last Christmas Eve Blow-Out In THE NIGHT BEFORE 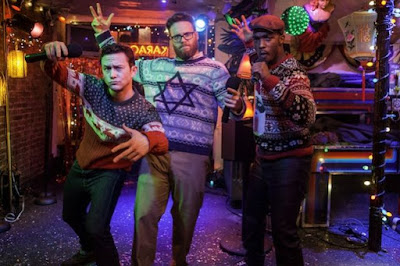 Sure, the premise of this Seth Rogen joint is pretty flimsy - i.e. three friends have one last Christmas Eve blow-out and farcical hilarity ensues - but after giving the silly stoner spin to such subjects as the apocalypse, cancer, and Kim Jong-un, I’m cool with that, as long as they keep the laughs coming.

And that they do, right from the get-go with a very welcome voice-over appearance by Tracy Morgan reciting rhyming lines in the familiar style of the classic Clement Clarke Moore poem from which the film derives its title. This gives us the set-up that back in 2001, Joseph Gordon-Levitt’s character Ethan lost his parents in an automobile accident, and in an effort to cheer him up, his friends Isaac (Rogen) and Chris (Anthony Mackie) initiate a hard partying holiday tradition that later comes to include an ongoing quest through the streets of New York City to find the elusive, mysterious Nutcracka Ball, considered “the Holy Grail of Christmas parties.”

In the present day, Isaac is a successful lawyer whose wife (Jillian Bell) is about to give birth to their first child, Chris is a pro football player who’s just started to get a taste of stardom, and Ethan is stuck in a rut as a struggling musician who has to take work that involves dressing as an elf and serving hors d’ourves at a corporate party on Christmas Eve.

The job is humiliating but things look up when while working coat-check Ethan happens upon 3 tickets to the Nutcracka Ball. Ethan gleefully steals them, quits his job, and runs off to find his friends. Meanwhile, in one of the movie’s most implausible moments (of which there are many), Isaac’s wife Betsy gifts him a neatly packaged box of hallucinogenic drugs and encourages him to go wild at his get-together. Yeah, sure.

So the fellows don tacky Cosby-style Christmas sweaters (Ethan’s has a standard line of red reindeer, while Isaac’s has a Star of David and Chris’s a black Santa – see above) and hit a karaoke bar, where they perform Run-DMC's “Christmas in Hollis,” and run into Ethan’s ex Diana (I forgot to mention that the guy is still reeling from a break-up) played by Lizzy Caplan.

Caplan, who, as a veteran of Party Down, THE INTERVIEW, HOT TUB TIME MACHINE, and going way back with these guys to the Freaks and Geeks days, is well acquainted with such sausage party shenanigans, is accompanied by Mindy Kaling (The Office U.S., The Mindy Project), who gets her phone mixed up with Isaac.

This leads to Isaac, who’s gone goofy by consuming most of the drugs in his gift box, getting dick pic texts and not knowing how to respond.

In true Seinfeldian-fashion, each character has their obsessive hang-up - Isaac’s is that he’s too fucked up to function, Chris is wanting to score weed for his team’s quarterback that he’s trying to impress (this is one of the film’s clunkiest scenerios, which involves Mackie chasing Broad City’s Ilana Glazer as an evil drug stealing freak), and Ethan’s is, of course, wanting to get back together with Diana.

And in a wonderfully unexpected appearance, a hilariously deadpan Michael Shannon shows up as the guy’s high-school pot dealer, Mr. Green. This marks the second time that Shannon has stolen a movie away from Gordon-Levitt (see: PREMIUM RUSH). Shannon kills it here – every line is a stone cold gem – so much so that he ought to have his own comedy vehicle some day.

The only thing that matters in a movie like this is if it’s funny, and THE NIGHT BEFORE has some of the funniest moments of any comedy I’ve seen this year, and it has a warm, fuzzy heart that conveys way more genuine Christmas spirit than, say, crap like the dysfunctional family comedy LOVE THE COOPERS (currently #3 at the box office).

THE NIGHT BEFORE is way better than THE INTERIEW, but a notch below THIS IS THE END on the scale of output of from the Apatow alma mater. It may have lazy plotting, some overly obvious set-ups, and much silliness just for silliness’ sake, but it brings so much in the way of laughter, likability, and an undoubtedly sincere theme of friendship, that it more than makes up for those faults.

It did make me wonder how much longer the 33-year old Rogen can make these man-child has to face growing up movies. He’ll probably yet again take a cue from Apatow, and do ‘em til the big 4-0. As long as he keeps bringing the funny, that’s fine by me.