Out today on Blu ray & DVD: 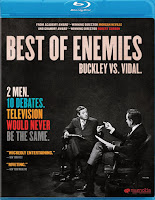 A documentary about a series of debates between two rival intellectuals largely made up of grainy archival footage from nearly half a century ago may sound like a snore, but Robert Gordon and Morgan Neville's BEST OF ENEMIES, a thorough breakdown of the televised feud between the conservative William F. Buckley and the liberal Gore Vidal in the late ‘60s is really intriguing, incendiary stuff.

Directors Morgan Neville (whose excellent 2013 doc 20 FEET FROM STARDOM won the Best Documentary Oscar) and Robert Gordon succinctly set the scene: in 1968, ABC, being the lowest rated of the three networks, decides to spice up what they were calling their “Unconventional Convention Coverage” of the Republican and Democratic national conventions by hiring Buckley and Vidal to do live commentary.

The background of both men was remarkedly similar as both had come from privileged upbringings, went to posh New England boarding schools, became acclaimed authors but failed politicians, had powerful political connections, and both spoke in haughty upper class accents, but their ideologies clashed like crazy.

Imagine two Frasier Cranes, one right-wing; one left-wing, pitted against each other, which shouldn’t be too hard as the filmmakers have Frasier himself, the conservative actor Kelsey Grammer, reading selected writings of Buckley’s (left-wing actor John Lithgow reads for Vidal) to fill in gaps in the presentation.

The debates themselves, which commence at the Republican National Convention in Miami in August ’68, are juicy, edgy affairs in which Buckley and Vidal viciously argue about the candidates, Vietnam, crime, poverty, and the civil rights movement among other incendiary issues.

For his part, Vidal gets in some quips such as that Buckley is “always to the right, I think, and almost always in the wrong,” and that he’s the “Mary Antoinette of the right wing.”

But it was the ninth debate in Chicago in which the two really came to a head.

In a heated discussion of the climate of the Democratic convention in which Buckley’s defense of the strong-arm tactics deployed by Mayor Richard Daley's police against anti-Vietnam War protestors causes Vidal to call him “crypto-Nazi.”

Buckley loses it: “Listen to me you queer, stop calling me a crypto-Nazi or I’ll sock you in the goddamn face and you’ll stay plastered!” 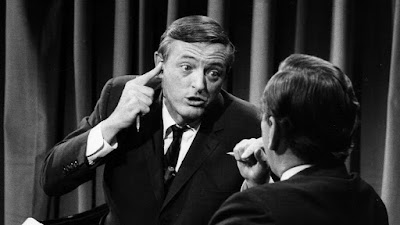 This shocking moment - these things were simply not said on TV at the time - was dissected in pieces written by both men for Esquire about the episode, which resulted in lawsuits (Buckley sued Vidal for his insinuation in his response article that Buckley was a closeted homosexual; Vidal countersued) that went on for years before being settled.

Buckley biographer, and interview subject, Sam Tanenhaus claims that Buckley “couldn’t let this thing go,” while Vidal’s close friend and editor Matt Tyrnauer talks about watching a VHS copy of the debates several times with Vidal until Tyrnauer felt like they were “edging into SUNSET BOULEVARD/Norma Desmond territory.”

Gordon and Neville convincingly posit that the Buckley/Vidal debates were the dawn of the era of pundit TV, in which corporate media entities like FOX News and MSNBC have taken those original commentators’ techniques to the bank, while no argument comes anywhere close to be resolved.

To further make their case, clips of talking heads shouting at each other conclude the film, including the now famous clip in which The Daily Show’s Jon Stewart goes on Fox News’ Crossfire knockoff Hannity & Colmes in 2003 and tells them that they’re “doing theater when you should be doing debate.”

It’s a great capper to this must see poli-doc that takes us back to when a couple of incredibly articulate men who as one of their debate moderator, ABC anchor Howard K. Smith, puts it “demonstrate how the English language ought to be used” - that is, before their intense hatred for one another got out of control.

That’s when it became the theater that Stewart bemoaned, but unfortunately that’s also when it was decided by the powers that be that it was good TV. The real takeaway here is that the Buckley/Vidal debates was the last and only time that that sort of theater was good TV.