Amy Winehouse’s Rise And Decline Makes For A Devastating Doc


Opening today at an indie art house near you (and a few multiplexes): 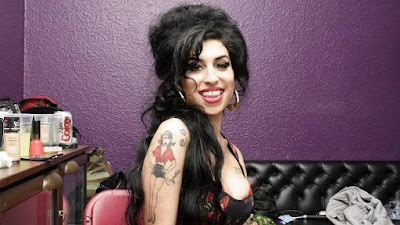 You will really get to know the face of the late, great jazz singer Amy Winehouse well before the end of this biodoc which details the rise and decline of the “little Jewish kid from North London with a big talent,” as her brother Alex described her.

Apparently from when she was a teenager to her tragic death at age 27 in 2011 from alcohol poisoning, somebody was filming her constantly. There’s so much in-her-face footage that at times it can make you feel like you’re in the chair across from her, hanging out.

This is ideal in the early stretches of the film, in which the bubbly, funny, and extremely talented performer is just starting out, poised on the verge of becoming a major top-charting, award-winning sensation. Of course, we get less face-time when the story grows dark as her battles with booze, drugs, mental health, and bulimia begin to overtake her musical career.

Throughout AMY there is a healthy, welcome amount of performance material. The songs we witness Winehouse singing live in clubs and working on in the recording studio are treated with great import via individual lyrics in handwritten fonts being superimposed on top of footage, and often nearly complete versions of key tracks.

One of the most endearing moments in the movie comes at the 2008 Grammys. Winehouse wasn’t at the event in L.A. but was going to perform on a live feed from Riverside Studios in London. Winehouse’s monster hit “Rehab” was up for Record of the Year, and we watch her listen to Tony Bennett (one of her idols), and Natalie Cole read the nominees for the category. When Justin Timberlake’s name and song is announced, Winehouse makes a face, and snarkily asks “His song is called ‘What Goes Around…Comes Around?” So great to get that little insight into what she thought about Timberlake, and to see her bug-eyed shock at winning the award seconds later is priceless as well.

Speaking of Bennett, there’s an affecting segment of the jazz legend working with Winehouse on the duet “Body and Soul.” Winehouse, in total hot mess mode, is having trouble getting her vocal right, but Bennett soothes the situation with understanding warmth. You completely believe Bennett when he says that she’s “one of the truest jazz singers I ever heard. Up there with Ella Fitzgerald and Billie Holiday.”

Winehouse’s ex-husband Blake Fielder-Civil sure comes off sketchy here – the guy introduced her to crack cocaine for Christ’s sake! Infamous photos of the couple covered all bloodied and bruised that appeared in tabloids in 2007 speak scary volumes.

Mitch Winehouse, Amy’s father, doesn’t come off much better; we see him in footage from 2005 say his daughter didn’t need to go to rehab, and then in 2009 he tried to cash in on her fame with a reality TV show – we see Amy get highly irritated that he invited a camera crew to follow them around when she was on vacation in St. Lucia. It’s no wonder Mitch is threatening to sue.

It’s devastating to see Winehouse losing the battle with her demons, while she was being ridiculed by the brutal British press and American late night comedians – we get a sampling of the jokes at the time by such luminaries as George Lopez and Jay Leno.

She may have had a look stolen from Ronnie Spector – down to the beehive hairdo and Cleopatra make-up – but Winehouse had an amazing voice that was all her own. That she only left us with a couple of records (2003’s “Frank” and 2006’s “Back To Black”), some random outtakes, guest appearances, and a smattering of live recordings, when there should’ve been decades of stellar work, is still hard to process, even four years after her death.

See this incredibly moving and illuminating biodoc, one of the best of its kind, and you’ll get a really good idea how seriously heartbreaking a loss this really is.

i heard her family doesnt want to take that doc bcs showing her addict.

good read. I jus heard about this on nor and I am interested in seeing if and hope it paints a better picture than the nina simone documentary. Amy sure had talent!