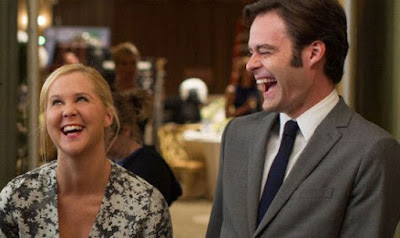 In his fifth feature, TRAINWRECK, Judd Apatow gives comedienne and Comedy Central star Amy Schumer her first starring role, and he let her write the movie too.

This is a first for Apatow as he wrote or co-wrote his previous films (THE 40-YEAR-OLD VIRGIN, KNOCKED UP, FUNNY PEOPLE, and THIS IS 40) but his confidence in Schumer’s filthy, feminist brand of comedy shines through, maybe a little too much, as like with all of his other movies, it could’ve been edited down considerably.

In a cold opening/flashback, we learn that Amy was taught by her father (longtime comic Colin Quinn in his best screen role) that “monogamy doesn’t work,” so we learn up front why her life consists of a series of one night stands. In her voice-over narration she tells us that she is actually seeing somebody – a lughead body builder played by WWE superstar John Cena – but, of course, not exclusively.

After getting dumped by Cena when he finds out, Amy surprises herself by developing actual feelings for a sports doctor (ex-Saturday Night Live cast member Bill Hader) she’s assigned to do a story on. However, initially she treats it like just another one night stand.

Hader, in one of his most grounded in reality roles, winningly keeps up with Schumer’s wisecracks. Their courtship is convincing, even when we can see the conflicts that will have them breaking up from a mile away.

The New York setting is another first for Apatow, but as expected he fills it with a bunch of recognizable faces like Dave Attell as a homeless guy that lives outside Amy’s apartment building, SNL’s Vanessa Bayer as one of her co-workers, current indie “it” girl Brie Larson as her settled down sister , Mike Birbiglia as Larson’s husband (Schumer was in comic Birbiglia’s SLEEPWALK WITH ME), and Ezra Miller (PERKS OF BEING A WALLFLOWER) as an eager young intern at the magazine.

But most notably there’s LeBron James as a version of himself, one of Hader’s patients, who does his amusingly droll spin on the advice giving best friend.

Schumer and Apatow embrace many rom com tropes here, mostly taken from the ANNIE HALL rulebook. The twist is that usually it’s the male who’s the commitment-phobe who has to make the climatic mad dash to win back their love when they finally realize what they want.

The answer is yes – there are a lot of genuinely funny moments throughout TRAINWRECK, but, as I mentioned before, it’s longer than it should be. It clocks in at just over 2 hours, when this material could’ve been shaped into a tidy 90 minutes – the ideal length for a comedy imho.

It’s like they couldn’t bear to cut anything that got a laugh out. In the aforementioned mad dash, they even work in a subway cameo by SNL’s Leslie Jones. It is funny, but it’s got “deleted scene” for a latter Blu ray/DVD release written all over it. So does a lot of shtick here (most of the Cena stuff should've been cut - no offense, Mr. Wrestling Champion).

But the best stuff is comedy gold, and there’s a warm and touching undercurrent to the proceedings. Schumer’s exchanges with Hader, Larson, and especially Quinn as her ailing father help flesh out that feeling.

TRAINWRECK will make Schumer fans happy (I'm one and I left the theater smiling), while turning a lot of newcomers into fans. It’s as flawed as its protagonist, but it brings the funny again and again and that’s way more important.