Pixar’s INSIDE OUT Pulls Every Heartstring There Is 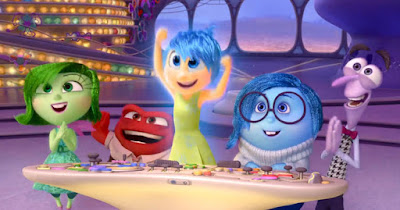 Pixar’s entry into this year’s summer event movie sweepstakes is one of the trusty animation studios’ most purely pleasurable productions.

Its strengths are many: it’s not another sequel, it has an incredibly solid comic cast headed by Amy Poehler, it’s a dazzling display of colorful concepts, it has the right amount of light, the right amount of darkness, it’s hilarious, it’s heartfelt, and it has a much better female-centric scenario than BRAVE.

Most of INSIDE OUT takes place inside the psyche of an 11-year old girl named Riley, voiced by Kaitlyn Dais. We learn right off the bat that there are five emotions behind the control panel of Riley’s mind: Joy, Sadness, Anger, Disgust, and Fear, which are respectively personified by Poehler, Phyllis Smith (best known as Phyllis from The Office), Lewis Black, Mindy Kaling (another Office alumni), and Bill Hader (Poehler’s former SNL co-star).

When Riley and her parents (voiced by Diane Lane and Kyle MacLachlan) move from Minnesota to San Francisco, Sadness starts to affect her core memories (represented by glowing orbs which are gathered on shelves in a vast long-term storage library). These core memories power personality islands – i.e. essential components of Riley’s identity – with names like Friendship Island, Hockey Island, Goofball Island, and Honesty Island, which are connected to the central control room via thin bridges.

Joy tries to stop a sad core memory of Riley crying in front of her class on the first day at her new school from becoming part of her being, but ends up getting sucked with Sadness, and other core memories, through a vacuum tube and deposited into the far reaches of the ever-growing more despondent girl’s mind.

So Joy and Sadness have to make their way back to headquarters, which is faltering due to Anger, Disgust, and Fear being in charge. Joy and Sadness journey through realms such as the Center for Abstract Thinking, Imagination Land, and Dream Production, but most significantly they encounter Riley’s long forgotten imaginary friend, Bing Bong, adorably voiced by Richard Kind.

Bing Bong, a hot pink hybrid of elephant, cat, and dolphin outfitted with a porkpie hat and bowtie, who cries hard candy, is eager to help the stranded emotions get back by way of the Train of Thought though Riley’s subconscious. Meanwhile, the identity islands are collapsing, and Anger plants the idea to have Riley run away back to Minnesota in a misguided attempt to fix things.

Poehler brings a can-do gusto to her lead role of Joy that would make her Parks and Recreation character Leslie Knope proud, while Smith’s Sadness gets to do more than just amusingly mope through – her developmental arc is key. The remaining emotions have their funny moments, especially Black’s red hot Anger, whose concern for learning curse words is a great running gag. I wouldn’t have minded more of Kaling and Hader’s takes on Disgust and Fear, but maybe less really is more.

As for the outside of Riley, Lane and MacLachlan provide a grounded parental presence – we get to see inside their heads in one of the film’s funniest scenes – that we see in flashes as being as stressed in adjusting to the move as their daughter. Dias does a good job as the everygirl Riley, wonderfully capturing the awkwardness, confusion, and pain that any kid and adult can relate to.

INSIDE OUT is on par with the best of Pixar. It maybe doesn’t scale the heights of Docter’s previous masterpiece UP, but that it gets so close is reason to rejoice. Its screenplay, courtesy of Docter, Josh Cooley, and Meg LeFauve, definitely re-establishes the studio's high standards of humor, invention, and emotional pull that had gotten a little misplaced in one too many sequels (that one being CARS 2).

As usual, the obligatory 3D presentation didn’t do much for me, but I was glad that I had the glasses on throughout as they helped to hide how much I kept tearing up. Consider every heartstring pulled.