Now playing at a monster-sized multiplex near you: 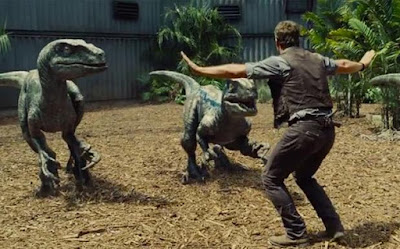 There are only two plot points in every JURASSIC PARK movie. They are as follows: #1. There are dinosaurs – that’s amazing! #2. We must now get the Hell away from them.

It’s been 22 years since the highly praised first film in the franchise which was based on the 1990 Michael Crichton bestseller, and 14 years since the heavily maligned third entry, but those same elements are strongly intact in this fourth installment.

They just added some new faces on top of the premise that we’re now dealing with a fully functioning theme park, and a new hybrid dinosaur designed to wow the kids because, as park operations manager Claire Dearing (Bryce Dallas Howard) puts it: “Let’s face it, no one’s impressed by a dinosaur anymore.”

This “new” adventure concerns Claire’s nephews (Nick Robinson and Ty Simpkins) coming to visit Jurassic World at the same time that the ginormous hybrid breaks free and, you know, starts killing people and other dinosaurs.

The idea to create this highly intelligent, extremely dangerous animal dubbed the Indominus rex for the purposes of marketing a new attraction is criticized by the park’s buff raptor wrangler Owen Grady (Chris Pratt), who leaves all his lovable Chris Pratt-isms (see Parks and Recreation, GUARDIANS OF THE GALAXY) behind to play a generic bad ass hero character complete with lame wise-cracks.

Meanwhile, the villain this time is the head of the park’s private security force portrayed by Vincent D’Onofrio, who wants to use the dinosaurs for military purposes. The moment he starts spouting out his evil disrespectful to nature rhetoric, we know we’re gonna see him getting eaten later.

There’s also the useless mystery of what dinosaurs the Indominus rex is a hybrid of. We are told that its base is a T-rex, but the rest is classified, so throughout the movie Pratt is trying to put together that puzzle.

But, of course, nobody cares about that flimsy connective tissue. What people are coming for is the mayhem with dinosaurs attacking tourists, kids narrowly escaping grisly deaths, and lots of CGI-ed spectacle, and it’s all here in set piece after set piece.

There are lots of call backs to the Steven Spielberg-directed original too, including an appearance by the old, crumbling Jurassic Park’s visitor’s center (complete with the same old jeep), holograms of the most memorable creatures such as the Dilophosaurus in the new fanged visitor’s center, and B.D. Wong, the only returning cast member from the first film, as Dr. Henry Wu, the chief geneticist, who could be seen as the film’s other villain.

There is some comic relief in the control room via Jake Johnson (New Girl) and Lauren Lapkus (Orange is the New Black) as frightened engineers, but very little of the film’s humor really takes hold.

JURASSIC WORLD is a fast paced ride, which will surely please hardcore fans of the franchise, and folks looking for a few hours of air-conditioning, but it’s just another pile of dinosaur shit, one that, at times, doesn’t look that different from last year’s GODZILLA reboot.

The monster mash-up that is the Indominus rex is just a much bigger T-rex, Pratt’s and Howard’s characters could have been played by anybody, and D’Onofrio's by-the-numbers bad guy is a crude bore (he's a much better villain on Netflix's Daredevil series).

And as much as composer Michael Giacchino cribs from John Williams’ original score to accompany sweeping shots of the island and theme park, that old Spielbergian sense of wonder just can’t quite be summoned.

I will say that the film does serve up a crowd pleasing climax, one that really roused the audience at the screening I attended, but that alone doesn’t elevate this tired material much.

That it took four screenwriters - Rick Jaffa, Amanda Silver, Derek Connolly, and director Trevorrow - to come up with this supersized retread may the only genuinely shocking and hair-raising thing about it.

Can't wait to watch this one! I totally enjoyed the first movie.