R.I.P. David L. Lander, Who Was So Much More Than Squiggy 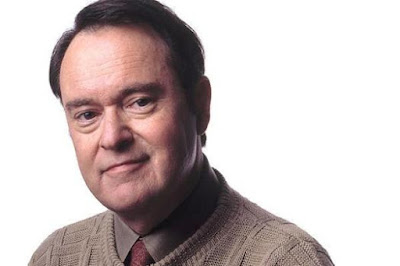 For some reason, I was hit by the death of comic actor David L. Lander just as hard as I have the recent passings of musical heroes, and other entertainment legends. It might be because I think I saw every episode of Laverne & Shirley when I was a kid, listened repeatedly to the album Lenny & Squiggy Present Lenny and the Squigtones (that’s its full title), and named the first cat I ever adopted and had for 16 years, Squiggy. One of those. All of them.

Although the title of this post declares that Lander was so much more than the character of Andrew “Squiggy” Squiggman, this is where we’ll begin as that’s how this performer is best known. Hell, the name Squiggy may likely be on Lander’s gravestone. 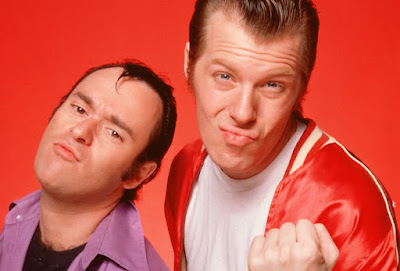 Lander portrayed the goofy greaser for eight seasons, encompassing 178 episodes from 1976-1983. Lander and his friend, Michael McKean, came up with the characters when they were college buddies at Carnegie Mellon University in Pittsburgh, then called Carnegie Tech. In 2007, Lander told Lanny Swerdlow of the Marijuana Anti-Prohibition Project that they created Lenny & Squiggy when they were high. Apart from entertaining friends with the improved antics of the duo at parties, Lander and McKean didn’t do much with them until 1975, when they were recruited by Penny Marshall, and her brother, producer Garry Marshall, to play Lenny & Squiggy on the sitcom, Laverne & Shirley. They were the upstairs neighbors to Marshall as Laverne and Cindy Williams as Shirley, and there was a running gag to their entrances long before Kramer made his boundryless bursts through Jerry’s door on Seinfeld in the ‘90s. You can get the idea from This YouTube montage of many of their entrances:
One of my favorite things that Lander and McKean did with the characters was the aforementioned album by Lenny & the Squigtones. The record features a live performance, recorded at the Roxy in LA in 1978, by the duo with a band (actually including Spinal Tap’s Nigel Tufnel). The songs are both hilarious and solid, and highly recommended - you can hear the whole album here.
Preceding Laverne & Shirley, both Lander and McKean were in the Los Angeles-based comedy group, The Credibility Gap. Lander joined the now little known outfit in 1969, followed by McKean in 1970. Harry Shearer, who would later go on to work with McKean in THIS IS SPINAL TAP, was also a major member, and through club appearances, radio appearances, and the making of several albums helped keep the project afloat until the late ‘70s. 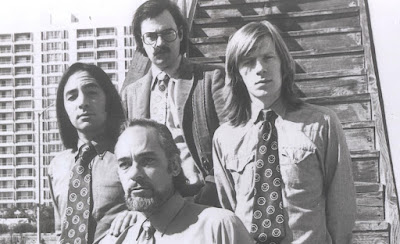 Their records are well worth seeking out as The Credibility Gap, seen above with Shearer, Lander, founder Richard Beebe, and McKean, really gave ‘70s era comedy competitors like Firesign Theater and National Lampoon a run for their money, and there’s a fair amount of their material on YouTube – maybe not enough for a rabbit hole deep dive though. This is one of my favorite bits – Lander and Shearer presenting a re-write/update of Abbott & Costello’s classic “Who’s on First” routine. Somehow the sketch makes more sense as it uses the real rock band names of The Who, Guess Who, and Yes for its premise:
For a while there, it looked like Lander and McKean were going to be inseparable comedy partners as they were in multiple movies together including CRACKING UP (Lander’s first film), 1941, and USED CARS. But in the early ‘80s they went their separate ways with McKean starring in a run of movies like SPINAL TAP, CLUE, EARTH GIRLS ARE EASY, and, one of my favorites, Christopher Guest’s first film as director, THE BIG PICTURE, while Lander became an ace voice actor for such animated projects as Galaxy High School, A Garfield Christmas Special (he was later on The Garfield Show), WHO FRAMED ROGER RABBIT, Johnny Bravo, A BUG’S LIFE, SpongeBob SquarePants, and too many more to mention. To cap off this look at Lander’s voice-over output, he re-united with McKean in cartoon form on the Nickelodeon show Oswald in the early 2000s. This is not to say Lander couldn’t be regularly seen in live action as he did guest spots on almost every TV show you can name from the ‘80s to the Aughts. He put in appearances on The Love Boat, Highway to Heaven, Matlock (yay, Matlock!), Simon & Simon, Married…with Children, Star Trek: The Next Generation, Head of the Class, Family Matters, The Nanny, Nash Bridges, Sabrina the Teenage Witch, and even a recurring role (well, three episodes) on Twin Peaks! 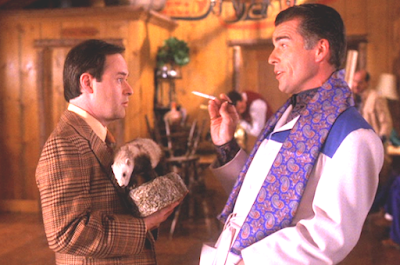 Lander contributed many memorable bit parts in movies, but his most notable is certainly his role as Radio Sportscaster in Penny Marshall’s 1992 hit, A LEAGUE OF THEIR OWN. The character was perfect for him as he was a huge baseball fan, and was later a talent scout for the Anaheim Angels, and the Seattle Mariners. 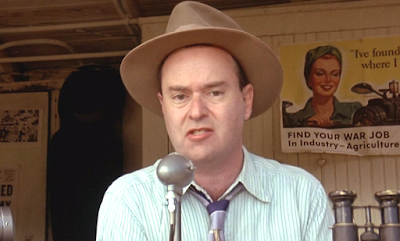 But it all comes back to Squiggy. I had long thought that his last portrayal of the iconic greaser weasel was a surprise cameo with McKean on Saturday Night Live in 1994. The occasion was a sketch entitled Quentin Tarantino’s Welcome Back Kotter, which took advantage of the show’s host John Travolta at the height of PULP FICTION popularity - hence the guns. 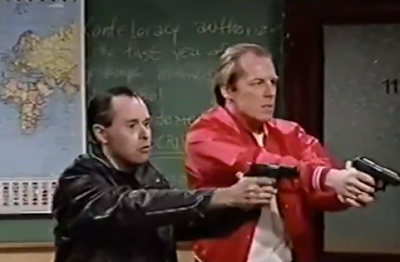 I was wrong about that being the guy’s finale as Lander reprised Squiggy in a 2002 episode of The Simpsons: 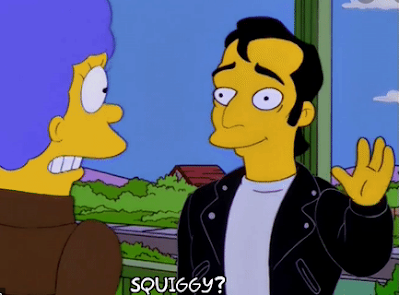 There’s also the fact that he played Principal Squiggy in SCARY MOVIE, but I’m not sure I want to count that. 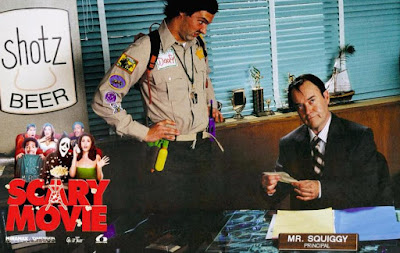 So Lander, who died at the age 73 from complications from multiple sclerosis, was a much loved comic actor who put an undeniable stamp on pop culture, though it’s one that will sadly fade as what kid is watching Laverne & Shirley these days? He’d definitely fit in with this blog’s Actors You Recognize, But Don’t Know Their Name series, as even those who grew up with him only know him as Squiggy. Maybe I shouldn’t have said that he “Was So Much More Than Squiggy” because he often referred to himself that way as in his 2002 book, Fall Down Laughing: How Squiggy Caught Multiple Sclerosis. Maybe I should have said he was “Squiggy & More.” As Lander said back in 2007, “Whatever happens, MS can't take it all.” R.I.P. David L. Lander
More later...
Copyright 2004-2018 Daniel Cook Johnson at 2:00 PM