GHOSTBUSTERS: AFTERLIFE - Not Afraid Of A Glorified Cameo!

Now playing at a haunted, slimy multiplex near you: 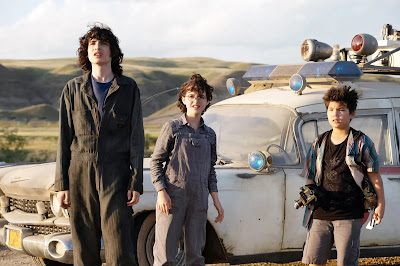 Since the 1989 release of GHOSTBUSTERS 2, there have been a head-spinning multitude of attempts to continue the series largely derailed by Bill Murray’s reluctance to revive his wise-cracking character of Dr. Peter Venkman. Yet, Murray did appear, in a different role, in Paul Feig’s 2016 female-led reboot, as did many members of the original cast despite it being a non canon entry.

But Feig’s film bombed, and angered fans, so we’re supposed to forget it exists, and embrace what’s being billed as an authentic GHOSTBUSTERS movie, one that exists in the same universe as the first two films, is filled with musical ques from Elmer Bernstein’s iconic score (now rendered by composer Rob Simonsen), is littered with callbacks to the 1984 classic including the reappearance of the Ectomobile (Ecto-1), and, most importantly, re-unites our proton pack wearing, spirit-capturing/entrapping, and beloved buddies, the real Ghostbusters (incidentally the name of an ‘80s animated series – whew, this franchise is ginormous!).

Not that this is a bad thing as it’s admirable that Reitman, and co-writer Gil Kenan wanted to establish a new ensemble including geeky teen Fin Wolfhard (who at times makes this feel like a super-sized episode of Stranger Things, an episode of which even had him wearing the Ghostbusters uniform), his just as geeky sister played by Mckenna Grace (whose hairstyle is overly familiar), and their exasperated mother portrayed by Carrie Coon.

As the kids learn that their broken down Oklahoman farm house (described as “Apocalyptic” by their mother), was once owned by their grandfather, Egon Spengler (originally played by the late, great Harold Ramis), they encounter a round of paranormal pursuits they can call their own.

Rudd is plagued by an army of tiny Stay Puff Marshmellow men, and then a terror dog named Vinz Clortho that possesses him, while Coon gets the Zuul makeover. This puts Rudd and Coon into the Rick Moranis, and Weaver parts, which even includes a recreation of the ascending stairway from the first one, though this time up the side of an ominous mountain.

So it’s up to the new breed of apparition hunters to take on these supernatural baddies, but don’t worry, they are joined by you know who. Unfortunately the guys that most of us are going to this movie to see only appear in the last 10 minutes, with a minimum of dialogue. Murray only gets four-five one-liners, tops, and we don’t get a story as to how they re-grouped to get there. Any of these guys' talk show appearances is bound to have more substance than their glorified cameo here.

But their appearance does work, and it’s nice that the filmmakers even found a way to include Ramis, who the movie is dedicated to.

GHOSTBUSTERS: AFTERLIFE may lack the laughs of the 1984 effort, and it may rely too much on plot points and story beats from that one too, but it’s a spirited (sorry), and a heartfelt tribute brought forth by a group of likable kids. I do miss some of the edge that was there before, and, of course, wish there was more material featuring Murray and Company, but at least there’s a during-the-credits scene with Venkman and Dana Barrett that’s worth sticking around for.

So this valiant venture to conclude the GHOSTBUSTERS trilogy is a warm and fuzzy follow-up, even if it most likely won’t come, see, or kick anybody’s ass.

* The picture above is of Murray donning the Ghostbusters outfit at the Spike Scream Awards in 2010. I’m using it here as pics of he, and his old buddies from the new flick are hard to come by.