Now streaming exclusively on Disney Plus: 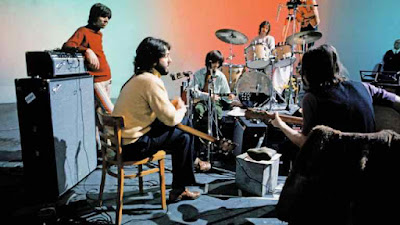 In the 1978 Beatles parody, All You Need is Lunch, narrator, Monty Python’s Eric Idle announced that “in the midst of all this public bickering, Let it Rot was released as a film, an album, and a lawsuit.”

But while this three-part documentary doesn’t touch on any of the legalities surrounding the project, Idle’s spoof acknowledges that for a long time there’s been a dark cloud hovering above the Beatles’ original swan song.

Now, the reason for this reputation comes down to the oft told narrative that the Beatles went into the GET BACK/LET IT BE production hating each other, suffered dreary sessions with mediocre material, and the film is a sloppy, badly edited rockumentary.

Although the film was released in the early ‘80s on Beta, VHS, and laserdisc, it soon went out of print was never re-issued on DVD, Blu ray, or any home video format. The word is that Paul McCartney has blocked the re-issue of LET IT BE, but it should be noted that George Harrison, John Lennon, and Ringo Starr also despised the film.

So after 40 years, we’ve got this delicious docu-series that shapes the Michael Lindsay-Hogg shot footage into a trilogy treasure trove of revelatory footage. The story is now an accessible breakdown of the Beatles’ final days that at times makes us feel like we’re in the same room as the Fab Four.

Each entry begins with this disclaimer: “The GET BACK project in January 1969 produced over 60 hours of film footage, and more than 150 hours of studio recordings.”

Part 1 kicks off with a 10-minute montage of old Beatles footage to give us their backstory leading up to 1969. This recap will surely be seen as redundant to many as these are tales well told, but nonetheless they get us to speed. 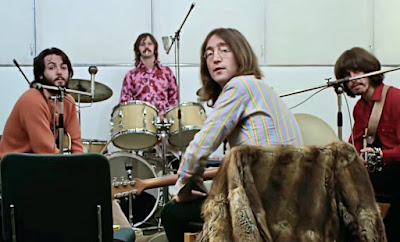 We join the Beatles as they rehearse at Twickenham Film Studios, where the plan is for the group to write, rehearse, and play live 14 new songs in two weeks for a TV special. Their time is short because the studio is due to be used for the shooting of THE MAGIC CHRISTIAN, starring Ringo and Peter Sellers. As they sit in front of Ringo’s drums, the boys appear to be in good spirits as they joke around and jam on such tunes as “I’ve Got a Feeling” and “Don’t Like Me Down.”

One of the most famous bits from the LET IT BE movie is when George and Paul seemingly have a scuffle in which George says “I'll play, you know, whatever you want me to play. Or I won't play at all, if you don't want me to play.” While it played as a harsh moment in Hogg’s film, we get to see it in full context, and understand that it was simply band bickering.

After an hour and a half of Beatle babbling (funny that George seems to be the most vocal in this first segment), working out songs, some of which are destined to later solo albums, covers of tunes by Dylan, Chuck Berry, Ben E.King, and even Hank Williams, the film builds up to a cliff hanger. One the members ups and quits (no Spoilers).

Part 2 gets even juicier as we hear a private conversation of John and Paul recorded by the filmmakers with a hidden microphone in a flower pot. This is followed by more of the same as the boys flesh the new songs out (expect a lot of “I’ve Got a Feeling,” “Two of Us,” and, of course, the title tune), engage in witty chats, and a pop-in by Peter Sellers, but it’s a bit of a let-down as he barely says anything. The Beatles then take their operations to familiar ground, the studio at Apple Headquarters, but not before Paul lays down a demo of “Oh, Darling” as the lights go out. Also, the TV special concept is abandoned.

But despite the change in scenery, the Beatles intend to go forward with their plan of recording songs without edits or overdubs, and now the idea to use the footage for a feature film. So as the lads from Liverpool goof around in the studio, the day that they need to come up with a big finale for the film looms nearer. So after considering several locations, they decide on the rooftop at Apple for their grand conclusion.

This brings us to Part 3, which contains the meat of the matter: the Apple rooftop performance – one of the most famous farewells in rock history, first though we’ve got to go through well over an hour of more studio stuff, but since this includes film of the Beatles cutting the version that appears on the album, Let it Be, it’s okay by me.” 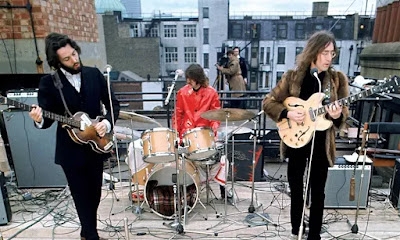 Now, having seen LET IT BE numerous times, I don’t think it’s as doom and gloom some folks think, but Jackson’s new fangled remix is a massive improvement. This is apparent in the rooftop climax, which now can be seen as a joyous concert after the Beatles’ fruitful time in the studio. Without the time limitation, Jackson is able to use more songs, and make some amusing drama out of the cops that showed up to try shut down the gig. Also the people on the street get some funny moments answering the interviewer’s questions.

Jackson really pulled it off here. It seems his work on his first doc, the excellent 2018 war documentary THEY SHALL NOT GROW OLD, proved to him where he could go in interpreting history.

While neither LET IT BE nor GET BACK contain my favorite batch of Beatles songs, I have a new perspective on the material from seeing the Beatles working on songs, bullshitting with each other, and experiencing those precious moments when inspiration takes hold. Just be prepared for seven hours of that. A lot of folks who aren’t hardcore Beatles fans, may find GET BACK boring, but since a large percentage of the world’s population are hardcore Beatle fans, that’s alright.

Labels: George Harrison, Get Back, Let It Be, Paul McCartney, Peter Jackson, Ringo Starr, The Beatles