Between Star Trek & His Real Life Space Trip, William Shatner Once Went To The Stars For Comedy 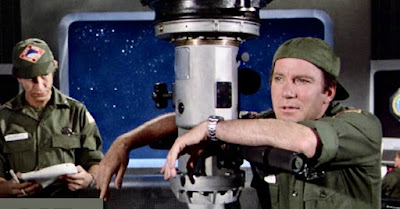 “Irony Can Be Pretty Ironic Sometimes”
Earlier today, iconic actor William Shatner boarded a rocket named New Shepherd with three fellow passengers to launch into space for an 11 minute journey.
Shatner, whose Wikipedia entry now adds the title “space tourist,” described the experience as “profound,” and that “I hope I never recover from this.” 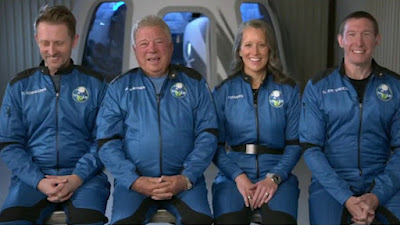 But while Shatner is best known for the role of Captain James T. Kirk in 79 episodes of the ‘60s sci-fi classic television program Star Trek, and seven movies which run from the late ‘70s to the mid ‘90s, he took a less heralded voyage to the stars in a sequel that was released the same year as STAR TREK: THE WRATH OF KHAN, one of the most acclaimed entries in the franchise.

That would be AIRPLANE II:THE SEQUEL, the 1982 follow-up to the hit satire, AIRPLANE! (1980). While AIRPLANE II recycled the disaster movie parody premise, it added some sci-fi film spoofery including a running gag involving a computer much like HAL-9000 from 2001: A SAPCE ODDYSEY.

The most obvious take-off comes in the form of Shatner as Buck Murdock, a tough as nails Commander of a space station, who aids in the rescue of the shuttle Mayflower One. Now, Shatner is standing in for Robert Stack, who played an incredibly stern airline pilot from the original. Both Shatner and Stack even say “that’s just what they’ll be expecting us to do.” 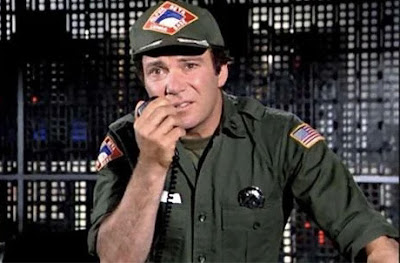 Apart from that, Shatner is obviously, and obnoxiously, satirizing his classic character, Captain Kirk. Extreme over-acting, mad mugging for the camera, and over dramatized speechifying make his part here the Shatner role from Heaven, or, for some, the Shatner role from Hell. There's even a shot of the U.S.S. Enterprise from the original series that Shatner's caricature sees through a periscope.
What’s most notable to me is that AIRPLANE II can be seen as the beginning of Shatner’s comedy career. The man had touched on comedy in previous years (BIG BAD MAMA for instance), but it wasn’t until that silly sequel that he was cast in all out comic productions  like LOADED WEAPON 1,  MISS CONGENIALITY, and DODGEBALL. Shatner also made many TV appearances most notably Boston Legal, for which he won an Emmy for his portrayal of lawyer Denny Crane. 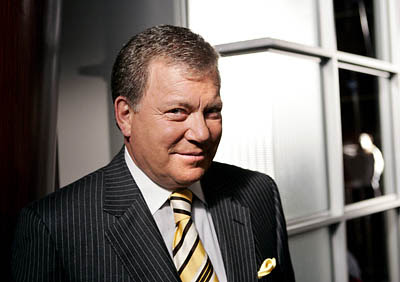 Now, it could be said that Shatner’s work as a dramatic actor was largely comical, even if it wasn’t meant to be. According to the Urban Dictionary, “Shatnerize” is described as “To deliberately produce something so bad it’s good.” At one point I theorized that Shatner was aware that he’s a joke to many of his fans and non fans, but he’s not sure what the joke is.

Now that he’s actually gone to space – at 90, the oldest human to do so – maybe it’s time to take the man more seriously. His film and TV career is nothing to sneeze at, his extensive list of books (dozens and dozens) as an author are largely best-sellers, and his personable appearances on talk shows are hilarious must sees.

Even if he didn’t reach the final frontier, it was fun to see Shatner boldly go where a number of others have gone before. Unless he shows up in some new movie or TV show, this epic yet brief voyage certainly serves as a final feather in his cap. Oh, and I bet he’ll get another book out of it. 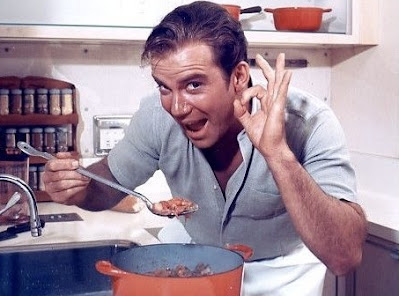 So I’ll leave you on this note, Shatner’s classic appearance on SNL in 1986, in which he told a convention full of Star Trek fans to “Get a life!”